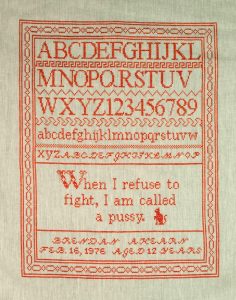 1) Jenni Sorkin, Co-curator of Revolution in the Making: Abstract Sculpture by Women 1947 – 2016, did a Q&A about this momentous exhibition which focuses on an underrepresented group of female artists. The show is on view at Hauser Wirth & Schimmel gallery space (via American Craft Council).

2) Alasdair Thomson created a series of stunning white garments carved completely out of marble, capturing the lightness of textiles with the heaviness of stone (via The Jealous Curator).

3) Dr. Alvia Wardlaw, the curator who launched the Gee’s Bend quilters phenomenon, has been changing the art game in Houston for decades. This article by Catherine D. Anspon asks the question, “Why Isn’t She Better Known?” (via Papercity).

4) The Metropolitan Museum of Art’s new exhibition, Manus x Machina, addresses fashion designer’s use of hand-made and machine-made couture. The show is up until September 5th, 2016.

5) In Bustour, a series of outfits sourced from public transportation prints, Menja Stevenson designed clothes that camouflaged herself within each bus or train interior, matching the fabric (via Colossal).

6) Sigalit Landau, whose work frequently features environmental issues facing the Dead Sea, has a new ethereal print series, Salt Bride, in which dresses are submerged in the sea (via Artsy).

8) PRINCERUTH is a New York-based textile and surface design studio, who specializes in print and knit swatch development and strive to create textiles that transcend conventional notions of materials, imagery, pattern and texture.

9) Baskets: Increase/Decrease by Brooke Marks-Swanson (her first solo show) will be on display at Velvet da Vinci in San Francisco. The show will be up until August 31st, 2016.

10) Even The Simpsons love some meditative textile processes every now and then. Check out this GIF of Lisa Simpson spinning.