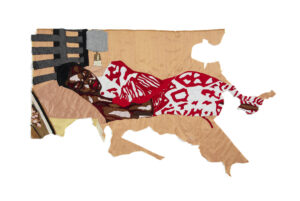 Thread for a Web Begun, Malawi-born, Johannesburg-based artist, Billie Zangewa’s (b. 1973) first solo museum exhibition, includes examples of the artist’s work from the past 15 years, as well as new pieces made specifically for this presentation.

Beginning her career in the fashion and advertising industries, Zangewa employs her understanding of textiles to portray personal and universal experiences through domestic interiors, urban landscapes, and portraiture.

Her earliest works were embroideries on found fabrics depicting remembered botanical scenes and animals from Botswana, where the artist was raised, but she soon transitioned to creating cityscapes, focusing on her experience as a woman in the city of Johannesburg and her personal relationships. These works explored her experience of the male gaze, leading her to begin to think more critically about how women view themselves and what the visualization of the female gaze, through self-portraiture, could look like.

After the birth of her son, Zangewa began making her well-known domestic interiors to explore the shift in focus from self-examination and femininity to motherhood and the home. Often referencing scenes or experiences from everyday life, Zangewa has stated that she is interested in depicting the work done by women that keeps society running smoothly, but which is often overlooked, undervalued, or ignored. Zangewa refers to this as “daily feminism,” which can be considered a contemporary version of “the personal is political.” Through the method of their making and their narrative content, Zangewa’s silk paintings illustrate gendered labor in a socio-political context, where the domestic sphere becomes a pretext for a deeper understanding of the construction of identity, questions around gender stereotypes, and racial prejudice.

Zangewa is represented by Lehmann Maupin, New York. Support for Thread for a Web Begun provided by The Thomas Kinkade Foundation and The Girlfriend Fund.