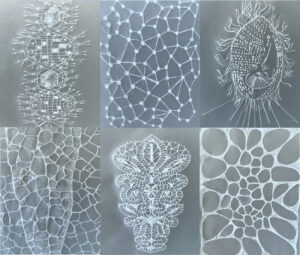 “Cabinet of Curiosity”, recent drawings by Andrea Brewster is an exhibition in a series of two-week installations made specifically for the front window of Mercury 20 Gallery. The exhibition is viewable 24 hours/day at 475 25th Street, Oakland, between Telegraph & Broadway. Because of viewing limitations due to the current Shelter-In-Place mandate, the exhibitions in the series are designed to be safely viewed from outside the gallery, on the sidewalk or in one’s car.

This installation consists of a series of intimate drawings on translucent vellum paper. The drawings are created by scratching into the surface of the vellum, which leaves behind white lines that are raised on one side and a subtle gradation of tone.

Andrea Brewster’s work is often textile based and as is comprised of otherworldly, organic abstractions, which reference biological life and species. She is particularly intrigued by the mathematical order underlying growth patterns and often utilizes similar algorithmic systems of repetition to create a predictable order of undulating waves and ripples or packed cell structures.

For this exhibition, Brewster has been particularly inspired by Seventeenth Century, European Cabinets of Art and Curiosity, which were collections featuring diverse objects-natural specimens (naturalia), works of art (artificialia), scientific instruments (scientifica), and exotic curiosities (exotica). As precursors to museums (and art galleries), through their wonders and marvels they represented the search for knowledge, and illustrated humankind’s place in the universe.