Artists make art out-of-hours in unusual spaces, and this was no more true than during the Covid-19 lockdown when I spent a couple hundred hours day and night in my shed, on a weaving response as part of a SciArt Project (1). My scientist collaborator was PhD candidate Mathew Vanner and the subject was his meticulously prepared microscopic slides of petrified wood samples. I designed a weaving sampler using a series of experimental lifts, weft manipulation and free weaving tapestry techniques on a table loom to interpret his microscope work. The title of the work reflects both the scientific methodology involved in preparing fine slivers of petrified rock samples for microscopic examination and the weaving of short experimental blocks to depict the visual material in the slides.

“Geologists take it for granted that rock equals time … I don’t know of another experience that we all have in our daily lives where a solid substance represents time.” — Peter Brannen (2)

“Ancient forests covered much of New Zealand’s landscape. These persisted from the time of Gondwana into the modern era. On occasion, the trees forming these forests became covered by ash fall or an anoxic bog, the first step of fossilisation. Exposure to ground water with high amounts of dissolved silica, calcite and other minerals is the second. This fluid flows over the dead trunks, replacing the organic tissue with these dissolved minerals, turning them to stone. Eventually, after millions of years, they may be brought back to the surface. Once at the surface, it is possible to study these ancient stone trees, to discover which modern family or genera the fossil trees were most closely related to. This is done by taking sections at different orientations–transverse, tangential and radial–which give three different views of the fossil cellular structure. These sections are carefully ground until they are less than a hair width across. The structures revealed are compared to those of modern trees. In the South Island, there are many sites that yield fossil wood of different ages. It is possible to find a nearly complete record of wood from the Jurassic (200 mya) to the Quaternary (almost modern). Araucarioxylon, ancient Kauri, has been present in New Zealand for the entirety of that record. Nothotfagoxylon, precursor of Southern Beech, has fossilised wood of Miocene age and is still present today. Casuarioxylon and Eucalyptus-like wood are also present in the Miocene but die out before the end of the Pliocene.” — Mathew Vanner

When I first met Mathew, we discussed the fossil wood record in the South Island of New Zealand, which he sketched as a timeline. Running top to bottom: Jurassic, Cretaceous, Palaeocene, Eocene, Oligocene, Miocene, Pliocene/Pleistocene (amalgamated, as much of the wood from these eras is difficult to date accurately) and today. Mathew’s schema provided me with the rationale and bare bones for the warp as a kind of linear paleo-botanical timeline. The next step was to take the colours from the slides for the warp timeline, and the final stage was to create weft infill that would reflect the patterns in the slides. Petrified wood is rock that reveals something particular to the trees from the time and conditions when they were living. Somewhat miraculously, the textures and patterns of the live individual are captured in the fossil wood, and can be seen millennia later in the fossilised remains. The colour palette was derived from microscopic slides of fossil wood samples. 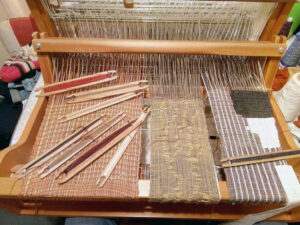 In my limited time working with Mathew’s research, he introduced me to the lineage of four different families that we are familiar with in our everyday lives. However, certain species within those tree families are under threat and face extinction events, as others have done in the past. This gave pause for thought on the fragility of the lineages I was weaving.

As we view the stops and starts in the woven wall hanging, we might reflect on the continuity of the remaining untampered line in the weaving, the Araucariaceae lineage, and ponder its future and conservation status in the new century: threatened by kauri die-back (New Zealand); facing the constant double threat of extinction and wildfire for the remaining stand of Wollemi pine (Australia); and appearing on the endangered list and CITES Appendix for monkey puzzle trees (Chile, Argentina). 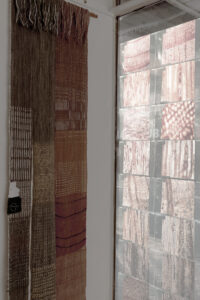 To augment the woven panel, I also collected windfall from local monkey puzzle trees (from the Araucariaceae family), which I covered in paper clay and fired. Clay comes from areas where streams or rivers once flowed; it is made from broken-down mountains, minerals, plant life and animals from long ago. In a poetic gesture, the firing process accelerated the fossilisation process and (re)turned my windfall from living tree to rock.

(1) The theme for the Art+Science project in 2021 was EARTH: caught in stone. https://www.op.ac.nz/study/art/research/projects/tile?id=4289

–Mathew Vanner is a PhD candidate at the University of Otago. He has been interested in rocks since he was very young, collecting rocks until his pockets were full to bursting. Collecting any rock turned into a love of fossil wood after meeting a lapidarist in Southland, developing into a half-decade-long quest to identify fossil wood after meeting geologist Daphne Lee.

–Pam McKinlay has a background in applied science and the history of art at the University of Otago. She collaborates with other artists in community outreach and art+science education projects on the themes of climate change, sustainability and biodiversity. 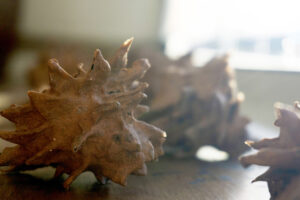