Slow Fiber Studios in Berkeley, California continues their mission bridging our interconnected conversations with the needle, thread, dye, and fiber. As a response to our dramatic paradigm shift and a rapid virtual network spanning across the world, Yoshiko Iwamoto Wada, founder of Slow Fiber Studios, with Ana Lisa Hedstrom, esteemed shibori artist, share their expertise and wisdom. They aim to disseminate the oral histories of those who work in shibori building upon tradition and innovation for generations to come. The title of the series Conversations with Cloth was inspired by Ana Lisa’s philosophy in working with fiber and dye. 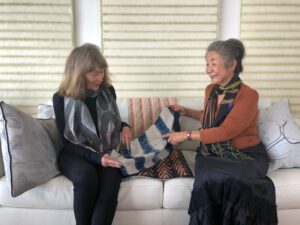 The series focuses on shibori, the technique that Yoshiko introduced and taught at Fiberworks in Berkeley in 1975, where they met. Having dedicated their work to explore the technique that treats a two-dimensional surface, into a three-dimensional form, became the theme of the four-part episodes on Arashi shibori, Nui Shibori, and upcoming Itajime Shibori, and Machine Sew-Resist Complex Substrate. See details at Slow Fiber Studio.

The series is receiving applause from the international audience for a welcoming ambiance from the screen into our living rooms. As if we are all together, sipping tea while intellectualizing shibori’s interconnected socio-cultural history, shop talk, and critiques of contemporary adaptations from artworks to fashion. In this review, Conversations with Cloth demonstrates these traditional technologies that inspire us to push beyond boundaries and create innovation in surface designs. 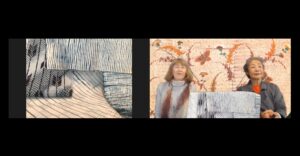 In episode one, Yoshiko and Ana Lisa demonstrate their encyclopedic knowledge in deciphering the white resist lines on mysterious processes on vintage Arashi patterns. The technique was invented by an Arimatsu artisan, Suski Kanezo in Arimatsu in 1880. They practiced using tension and resist, requiring two people to wrap cloth, push on a huge pole and dye in a big vat. 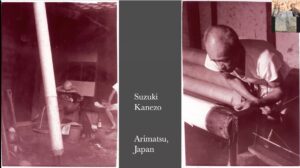 A century later, Yoshiko and Ana Lisa articulate how the craftspeople and artists have taken the simple idea using a pole to expand the processes for resist-dyeing and shaping of cloth surfaces. They highlight artists: Marie-Helene Guelton, Judith Content, Candace Edgerly, Jan Myers-Newbury, Hiroyuki Shindo, Anne Selby, and Michale Pickett.

Yoshiko credits Ana Lisa and Kaei Hayakawa as “only two remaining true Arashi masters still practicing in the world, who have pushed the boundaries beyond the processes into materials & dyes.”

Ana Lisa’s artwork exemplifies ingenious creativity that fully explores the potential of material and technology using color and dyes. “Arashi is a language of stripes, but the textures and pleats are also an intrinsic part of the process”- Ana Lisa. 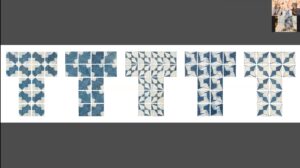 In Japan, Kaei Hayakawa is considered the last lineage of traditional Arashi artisans in Arimatsu. A craftsman and an artist in his own right. “He has pushed the boundaries of traditional shibori into the 21st century. Kaei’s work has extended to space and place, architectural applications using materials such as porcelain, glass, and concrete.” -Yoshiko. 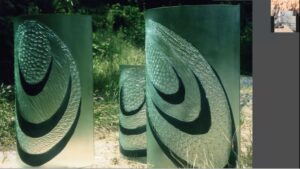 Episode two is a poetic trajectory of how Nui shibori, the simple running stitch, and then gathered to dye, contributed to Japanese textile history. The earliest example dates to the eighth century. Yoshiko narrates historical examples of surface design to introduce the Tsujigahana myth from the sixteenth to the seventeenth century. Tsujigahana ‘style’ of historical textiles is a landmark textile expression as the first pictorial images were articulated in the dyeing process instead of being woven or embroidered with additional fine sumi ink painting details augment shibori color fields with a feathering effect. 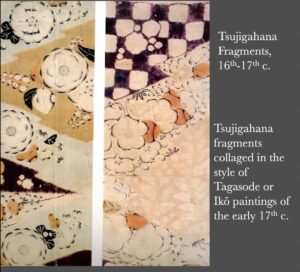 Itichku Kobuta (1917-2003) was inspired by the so-called Tsujigahana textiles. He wanted to create his surface design adaptations, thus creating his style and technique he identified as “ItichkuTsujigahana”. 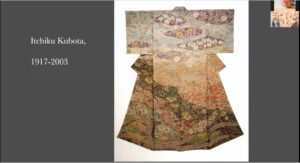 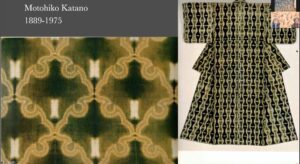 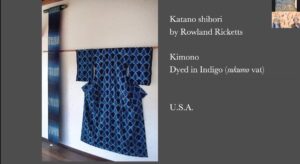 Frank Connet, works with wool, indigo and walnut dyes. He professes the interest of natural phenomena: erosion, the action of wind and gradual change. Ana Lisa adds “never will you look at nature the same way again, it’ll be shibori.”

Mo Kelman combines shibori and installations by creating new dimensions of surface design. Beyond textiles, it’s sculptural, rendering the ephemeral phenomena of clouds, smoke and flowing waters. Catherine Ellis, is a master of woven shibori and natural dye. She began her shibori journey at 19 years old, at Yoshiko’s Japanese textile class at Penland, to learn about Taiten shibori which combines weaving to approximate hand stitching.

Conversations with Cloth continues the series, with upcoming episodes three and four. For access to all four episodes visit Slow Fiber Studios to register. The series is a collection of documented oral histories, ideal for creative inspiration, educators, and scholars of craft, design, textile, and art.