“Animating Life: The Art, Science, and Wonder of LAIKA” Review by Lauren Sinner

LAIKA’s studio sits just outside Portland, Oregon, so it’s naturally fitting the exhibition Animating Life: The Art, Science, and Wonder of LAIKA was housed at the Portland Art Museum. The show was on display October 14th, 2017 to May 20th, 2018, and featured behind-the-scenes photography, video clips, and physical artwork from its four films. Animating Life was a deep view into the visionary artistry and technology of the globally renowned animation studio. 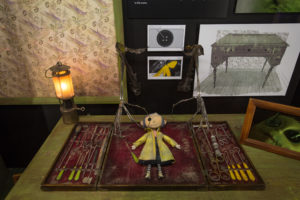 The exhibition kicks off with the pink house from Coraline (2009) outside the entrance to the main part of the museum. You can see the weathered details on the siding and roof while being able to walk around the entire home. This house is also the first object in the exhibition, which sets the stage for the scale and craftsmanship of what you’ll see, that is only going to increase the displays go on. 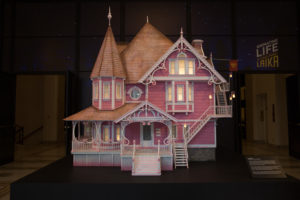 As you walk into the main room of the exhibition, you’re confronted with the dramatically lit Skeleton Monster from Kubo and the Two Strings (2016), who stands at 16 feet tall. The actual characters (Kubo, Monkey, and Beetle) are on pedestals to the left, juxtaposing their size differences. As LAIKA’s most recent movie, putting these characters first helps with recognizing the film and excites museum-goers with what’s to come. The fact that these drastically different in scale puppets were all used in the same stop motion scenes is mind blowing. 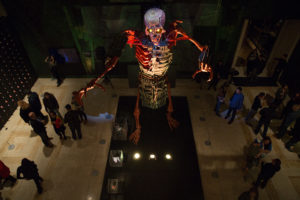 Installation of Skeleton Monster, Kubo, Beetle, and Monkey from Kubo and the Two Strings, 2016.

To the left is a gridded wall of 3D printed facial expressions of characters from LAIKA’s four movies. Each character needs to have multiples of every possible facial expression they could have throughout the movie. All are printed, sanded, and finished by hand and are unique works of art in their own right. The faces take up an entire giant wall, and you know it’s only a fraction of the actual expressions that need to be made for every puppet. 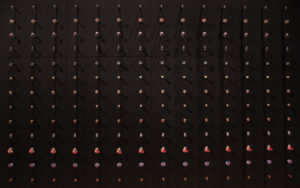 Installation of facial expressions from all 4 LAIKA movies, 2017.

In a small room, a video series plays on the history, production, costumes, props, and innovation LAIKA has shown over the years. As a maker myself, the ones on how the tiny costumes are designed and sewn were the most fascinating. Taking a garment—like a knitted sweater—and scaling it down to be only inches in size is harder than it seems. The individual stitches become huge in scale and don’t allow for the same movement as it would in human-scale. LAIKA has been working for years on ways to knit, crochet, sew, and embroider miniature garments for their puppets.

Further back into the museum, there is a large room filled with props, clothing, set designs, and concept sketches. Some of the highlights in this room include: Coraline’s Garden, Norman’s Home (ParaNorman, 2012), the Ballroom from The Boxtrolls (2014), and the Garden of Eyes from Kubo and the Two Strings. 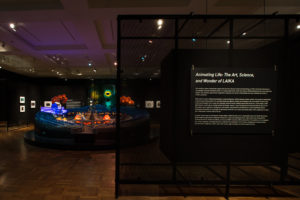 Installation of Animating Life featuring Coraline’s Garden (2009) and the Garden of Eyes (2016). 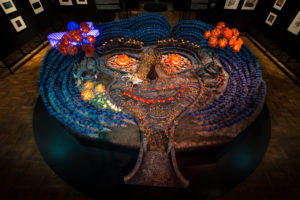 Installation of Coraline’s Garden and photos from Coraline, 2009. 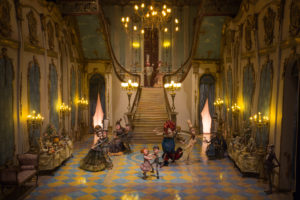 Ballroom from The Boxtrolls, 2014. 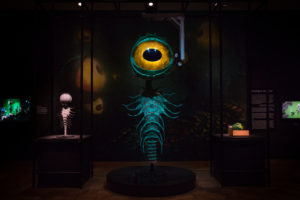 Concept sketches, models, videos, and final puppet of the Garden of Eyes from Kubo and the Two Strings, 2016.

Animating Life also includes a few spots where visitors could interact with the innovations in stop motion LAIKA has created over the years. Kubo and the Two Strings pushed their designers to think outside the box on how to create their scenes with as little computer enhancement as possible. In one area, they have a series of torn blue papers attached to a rig, which visitors could turn to replicate the waves of the storm from when Kubo was at sea.

Overall, Animating Life gives a great insight into the history, process, and techniques LAIKA uses to make their films. As a personal fan of all the movies, it was eye-opening to see the process used to create such iconic scenes. Exhibitions like this that blend popular culture, fine craftsmanship, and the museum experience are great, especially when in comparison to traditional art shows. Animating Life highlights the artistic merit, labor, and creative work of LAIKA’s animators.

LAIKA, established in Portland, OR in 2005, has produced four Oscar-nominated features, including Kubo and the Two Strings, The Boxtrolls, ParaNorman, and Coraline. Among LAIKA’s many accolades is a 2016 Scientific and Technology Oscar® for its rapid prototyping system, which uses 3D printers to revolutionize film production.

For more on stop motion animation, check out “Stop Motion Craft in the Digital Age” by Kate Fenker (pages 18–23) in our Summer 2018 edition of Surface Design Journal “The Art of Labor.”