Art and Earth by Christine Keller

A series of exhibitions were held in Dunedin, NZ, in which artists are invited to collaborate with scientists of a specific speciality, in this case geologists. Directors of these exhibitions are Pam McKinlay and Dr Jenny Rock. Below we take a look at the collaboration between textile artist Christine Keller and geologist Dr. Adam Martin.

Being no newbie to the art and science exhibition series, I was waiting for the ‘rocky’ part with excitement. My father, a teacher, spent a huge part of my childhood getting his head around mineral and metal crystal structures. He wanted to visualise the theory and to understand what the scientists told him. He searched for the right orb to represent carbon and other atoms, trying out ping pong and swimming pool cover balls and finally settling on small nylon balls. These experiments meant our house was full of spheres glued together to form conglomerates or crystal structures. Other memorable experiments included blowing dishwashing liquid through a thin hose onto the surface of the bathtub to understand the organisation of grain boundaries between different crystals. Life became even more exciting when my father gained access to an electron microscope and we could watch crystals grow and experiment with polarised light. 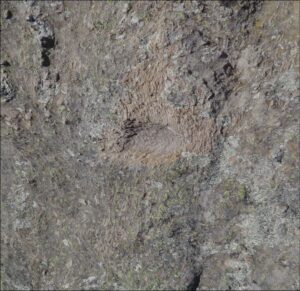 Schist rock (a rock made of mica and quartz minerals).

Therefore, I was primed to work with a geologist and ‘speed-dating’ the scientists in 2019 I found my match in Dr. Adam Martin of GNS Science, who threw out colourful pictures of rocks under the microscope as bait. I was hooked immediately. Lucky for me, he was not only providing me with ‘my’ schist rock (a rock made of mica and quartz minerals) and rock image for inspiration, but also showed a curiosity for the process I use for making my panels. I am happy to report we got to know each other’s works a little during this project. 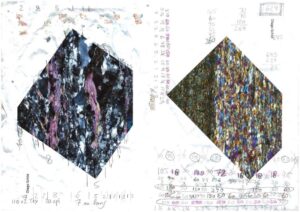 Notes on top of Adam’s images of Otago Schist rock.

With my preferred images in mind, I showed Adam my fabrics and chose roughly a technique which I thought suitable for creating a response to the rock. He reminded me that the rock was from the Maniototo district in Otago (a South Island area of New Zealand) and asked me if I had materials from that area – which I did. I purposefully used wool from sheep raised locally to represent the mineral mica (bright colours) in the work. The other material used was a superfine merino yarn to represent the quartz and feldspar minerals in the work. This yarn originates either from Australia or New Zealand, is spun in Italy, purchased in Germany and brought back to New Zealand. So, this yarn has quite a carbon footprint. 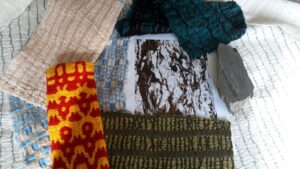 I prepared various warps that were dyed for different colour effects, before putting them together on the loom. The loom is a 16 shaft AVL compu-dobby with two warp beams, which gives one a choice to weave more than one layer under different warp tensions. I was inspired by the colours in the rock image and dyed my threads accordingly. Then Adam, Steve Ting (from the Science Communication department at Otago University), my husband, Sam Patrick, and I warped the loom using the two 10-meter warps, one predominantly anthracite in colour on one beam, and the other one dyed in greys and purples on the second beam. 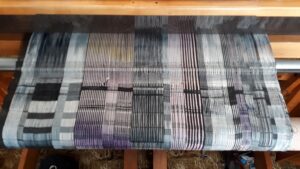 During this process, the serendipity with which a rock is pulled, stretched and cooked during its history inspired me. The exact outcome for a rock is not predetermined, even though the parameters of the process are somewhat clear(ish). I wanted to adopt a similar approach in my work. In the beginning, I had a general parameter in my mind for the weaving, but not a strict threading and structure plan. Instead I threaded spontaneously, responding to the process. The loom was set up in March 2020 when lock down hit. By January 2021 when I could finally start the weaving  I recalled the weaving parameters I had set, but not the exact threading. I wove intuitively, always responding to the last little bit, evolving the work with time. 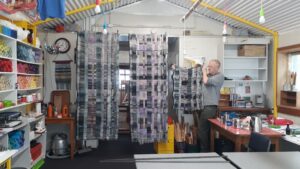 Three panels emerged. The first one was felted as is my normal process. However, I was surprised when panel two and three spoke to me asking not to be felted. I have learnt to trust my gut feeling and the process in these matters and did not felt them. Panel two is a single layer fabric with lots of floating threads. The third panel is a double weave which I truly enjoyed as a new piece of work, the likes I have never done before. I was thinking of the women weavers at the Bauhaus, and training-wise, one could call me a grandchild of the Bauhaus school. This third panel has inspired me to want to push my work further than I have been doing for a long time. Recently, I have dedicated my time to set up and run a weaving studio that works for many as a community workshop and has been very rewarding. But now I feel it is also time I give myself more space to research and create my own favourite weaving works. I am so thankful that Adam has stayed alongside my work through all the steps of the process. 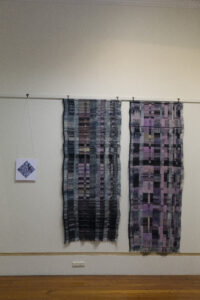 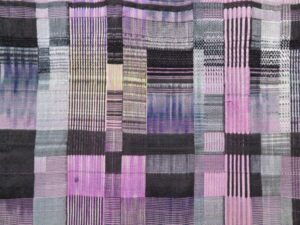 –German-born New Zealand based artist Christine Keller holds an MFA from Concordia University (2004) in Montreal, Canada and a Masters equivalent from Gesamthochschule Uni Kassel (1994), Germany. Christine exhibits her awards winning work nationally and internationally since 1987. She was the academic leader of the Textile Section of Dunedin School of Art at Otago Polytechnic from 2005 to 2010. In late 2012 she founded Dunedin-based Weaving Studio Weaving on Hillingdon and in 2015 the community space Dunedin’s LoomRoom. This is the fourth Art and Science project she joined. As an immigrant to New Zealand, she took New Zealand Citizenship in 2016.