Shifting Landscapes, SDA’s juried exhibition, recently opened at form & concept gallery in Santa Fe, New Mexico this February. The works in the show explore both traditional and non-traditional interpretations of place either inspired by or made from fiber and textile materials and techniques. Even though there were so many great works accepted into the show, featured below are the five award winners, and their thoughts on their inspiring work.

Rena Detrixhe creates contemplative work combining repetitive process and collected or scavenged materials to produce large-scale objects and installations. Often utilizing natural materials, Detrixhe investigates the relationship between humans and the natural world. She is the recipient of numerous awards including a scholarship to attend the prestigious art school at Hongik University in Seoul, South Korea, the Brosseau Award from the Spencer Museum of Art in Lawrence, Kansas, and a two-year studio residency with Charlotte Street Foundation in Kansas City, Missouri. 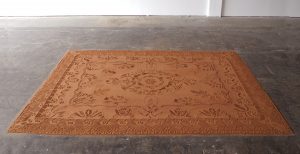 “I am a hunter and gatherer… I am interested in the complicated relationship between humans and the natural world which is at times intimate and other times devastating.” 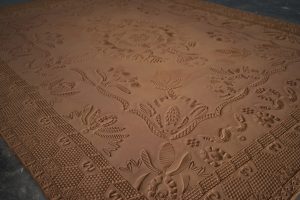 “I am drawn to materials that hold stories from their familiar sources… With intense focus and repetition I participate in a meditative act, perhaps similar to domestic arts of crochet, embroidery and weaving.” 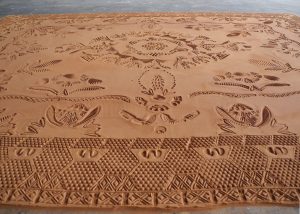 “I am interested in how simple yet meticulous processes evoke labor and imbue my works with a sense of passing time.”

Yewen Dong tells stories of time, water, crack lines, square, and flat space using ceramics and paper collage, translating them into tangible and physical forms. Mark-making in the clay visualizes and records the lapse of time–creating textures and shapes that mark the movement and status of time.Dong was born and grew up in Shenzhen, China. She received her BA in Art Design from the China Central Academy of Fine Arts in 2013 and she is now an MFA candidate in Ceramics at the School of the Art Institute of Chicago. 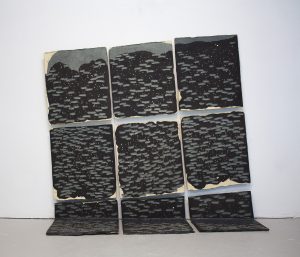 TIME
I like to use the layers as an element to explore the stories of the time.
A period of time for me could be like the layers that a day present.
I record those periods of time with a process of duplicating and overlapping layers;
each of the layers has a different status or direction before or after the first.
WATER
I like water.
I like cupping water with my hands
and watching it running back into the river, lake, and ocean;
I enjoy imaging water (river, lake, and ocean) as a bed sheet floating on the ground;
I like sitting, standing and walking in the water and being submerged in water up to my neck
– but I don’t know how to swim.
CRACK LINE
I like walking while looking down on the ground.
Time spending in looking the grid, the edge, the surface, the texture, the color, the aging,
the fragile, the crack, the relieve, the brokenness, the sink, space, the shadow, the asphalt,
the iron wire structure, the sand…are the thing that I’m interested in.

Textiles, pattern, and power relationships drive Wendy Weiss and her studio work. Primarily a weaver and natural dyer, she works with other materials, most recently, digitally cut vinyl to create multi-color wall installations. She is professor emerita of textile design in the Department of Textiles, Merchandising and Fashion Design at the University of Nebraska-Lincoln. She serves on the board of the Textile Society of America as External Relations Director and Newsletter Editor.

“Litzmannstadt Getto, 1940-1944 (2016) is the first in a group of works in which I combine text and pattern to evoke both real and conceptual landscapes. The Litzmannstadt Getto or Lodz Ghetto was second in scale only to the Warsaw Ghetto in wartime Poland and was a death camp deportation site for Jews brought in from all over Europe. The weaving is based on a 2014 photograph of a granite marker on a street corner in the former ghetto.”

Yuge Zhou is a Chinese born, Chicago-based artist whose video and installation works portray ‘urban dispositions’ and explore the complex interactions between humans and their environment. Zhou holds a MFA from School of the Art Institute of Chicago as well as a masters degree in Computer Engineering from Syracuse University. In addition to her art practice, Zhou also directs and curates 150 Media Stream, the largest new media and video art installation in Chicago. 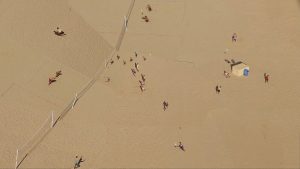 “My work originates from a simple desire to make people aware of their surroundings—both the physical and the psychological world they live in. I am deeply intrigued by the history and distinctive characteristics of American urban cities, and the collective idealism, attitude, and pace of the lives of their inhabitants.”

Eszter Bornemisza creates wall-hangings, installations and objects from the ubiquitous material of waste newspaper and cloth. Based in Budapest, Hungary, Bornemisza was originally a mathematician, she started working with textiles in the mid ’90-ties with exploring her own ways in surface design and quilting. She has extensively exhibited internationally and won several prizes.

“As an urban citizen the theme of my work is revolving around ideas that reflect our relations to past and present cultures of the place: the layers of existence… With the fragmented, distorted or disintegrated city plans that like labyrinths offer a rich ground for associations, my intention is deepening insight into urban life and circumstances.”

Juried by Erika Lynne Hanson, fiber artist, and Frank Rose, form & concept Gallery Director, Shifting Landscapes will be on display until May 20th, 2017.