Sheila Pepe: Hot Mess Formalism at the Phoenix Art Museum is the first mid-career review of Sheila Pepe’s work. The exhibit was curated by the Selig Family Chief Curator Gilbert Vicario and includes Pepe’s signature yarn installations as well as drawings, video, and votive works in a variety of media. It is exciting to see the breadth of Pepe’s work, but what is most thrilling is the new textile work commissioned for the exhibit that highlights her masterful use of space and interest in flip-flopping expectations of high and low, artist and maker.

The show is introduced by a wall text and a selection of Pepe’s early work. Most notable is Women Are Bricks (Mobile Bricks) first made in 1983 and recreated for this exhibit. It consists of triangular handmade bricks resting on small cement rollers on a flowered carpet. The piece sits in front of a white wall, confronting it; the proportions of the piece and closeness to the floor challenge our expectations of how to interact with work in a museum. The overall composition references a Leavittown neighbourhood and the overlooked feminine labour that goes on inside of the homes in contrast to materials often perceived as masculine 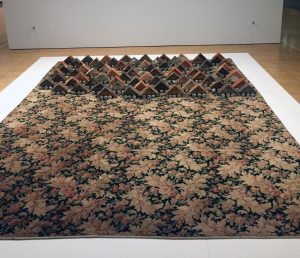 The magic of Hot Mess Formalism is in Pepe’s unerring color sense and use of space. On the wall backing Women Are Bricks (Mobile Bricks) is Second Council Vatican Wrap, a large purple knitted form reaching up several stories and sliding onto the floor. From the top of the piece stretches a canopy of gold yarn crisscrossing over and into the next gallery area which features the newest piece, commissioned by the museum for this exhibit, 91 BCE ⏳ Not So Good For Emperors. 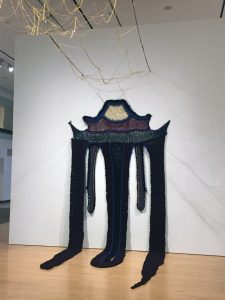 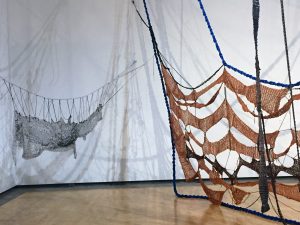 The gallery space, though it has several large white walls, also has features which could be visually distracting—a dark elevator, floating stairs, and uneven wall heights. In previous exhibits I have seen here, the work has competed with these features. Here it is integrated. Every move throughout the space brings to light a new detail, a new visual delight that Pepe has carefully thought out. 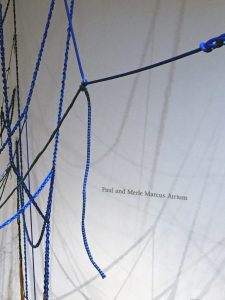 As one moves up the open stair to see the rest of the exhibit and the view of 91 BCE ⏳ Not So Good For Emperors changes new details emerge. A length of blue rope runs up the narrow side of a wall which moves away from us, and pauses in a heap on top of the wall before continuing its journey. The viewer is led through the gallery by the trails of rope and yarn, but pauses are also rewarded by new details emerging, like the ingenious way materials are attached to the wall or a simple knot high in the air. 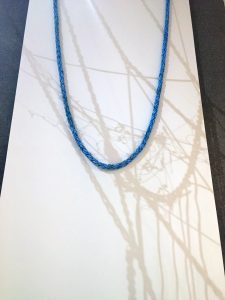 On the third floor overlooking the gallery with 91 BCE ⏳ Not So Good For Emperors is Red Hook at Bedford Terrace from 2008, the newest incarnation of Pepe’s connections series. Largely made of bright orange-red shoelaces and blue rope it vibrates against the eyes. In previous iterations viewers have been allowed to take away shoelaces and yarn from the piece and do add to it, constantly changing and adapting the work. Although not possible here, Red Hook does not stay confined to its gallery, but leaves with one end of the blue rope drapes down across a wall from its third floor gallery. 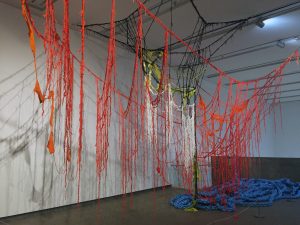 Hot Mess Formalism could not exist without the number of museum staff and volunteers that helped physically bring it into being. Ceramics students from Arizona State University fired the bricks for Women Are Bricks and Pepe worked with large numbers of museum docents and staff to install the show. To create 91 BCE ⏳ Not So Good For Emperors Pepe worked closely with the preparators to see what would be possible in terms of weights, balances and attachment points. 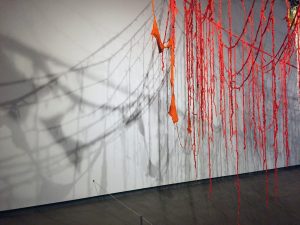 It is exciting to see Pepe being introduced to a new audience in the South West and to be able to trace her career and thought processes through this variety of work. The show will move on to the Everson Museum of Art in Syracuse, New York in 2018, and I encourage everyone in the area to see it.