“Conversations with Cloth Finale: Lost Traditions of Shibori in the Americas” by Eva-Maria Spampinato

Slow Fiber Studios, Conversations with Cloth, Series Two completed it’s online program with Episode 4: The Americas: Shibori and Four-Selvedge Weaving in Mexico, Peru, Chile and Argentina, with Jim Bassler in his California studio. Yoshiko Iwamoto Wada and Ana Lisa Hedstrom shared how truly blessed to be part of the new world, by honoring the spinners, weavers, dyers, all makers, collectors and researchers of textiles from North, Central to South America. This episode, they embrace the lost traditions of pre-Colombian era, Tenochtitlan (Ancient Mexican City), Indigenous states, and the Andean Civilizations through historical remaking projects and innovations with contemporary artistic adaptations. They have traveled virtually and physically to visit old friends, colleagues, and create new friendships that has made 2021 a memorable year. Reminding us all, this series was all in pursuit of connecting, through the language of shibori, across the globe to embrace the wonderful creative pursuits and traditions that exist(ed). 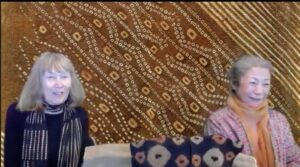 Based on early research by Virginia Davis on Imgard Johnson’s thorough recording on shibori practiced until 1957 of the Queretaro State, in Mexico, Hiroshi Murase (master shibori artisan) and Dr. Kazuki Yamazaki (a natural dye expert) took on a project for the 10th WSN International Shibori Symposium in Oaxaca, 2016. They focused on shibori techniques on wool/cashmere and natural dyes processes using cochineal and indigo. Their result revealed technical sophistication and design complexity, due to cochineal over-powering indigo, creating reddish purple on wool, a material not so prevalent in Japan. 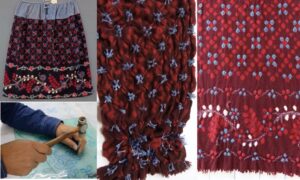 Engaged in the replication research project invited by Yoshiko, for the 3rd ISS Chile, Jim Bassler (artist and weaver) embarked on an inquiry on the Amarras (tie-dye in Spanish) textiles of Nazca and Chancy using camelid fiber, cotton and Peruvian four-selvedge weaving. Taking on this new challenge, Jim applied his strong weavers problem solving skills to figure out the loom construction. In result, he invented an innovative approach to discontinuous weft weaving that introduced a whole new artistic exploration. 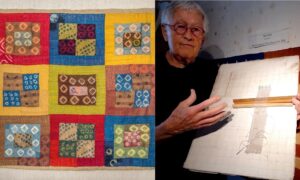 Dr. Alejandro de Avila, (director of Jardín Etnobotánico de Oaxaca and curator Museo Textil de Oaxaca) discussed Shibori in Mexico, a tradition that has existed for centuries but died out in the last forty years. Rulers of Tenochtitlan used to distinguish themselves by wearing the textile mantle that was dyed with Indigo and shibori. One of the earliest archaeological examples is currently being analyzed to determine the dyes on cotton; its traditional name cuappachtlalpilli tilmatli (lichen dye-knotted mantle) is indigo and shibori. There is evidence that agave fiber was used to make the tie knots, able to repel moisture when penetrated in dye, are shown in archival shibori. 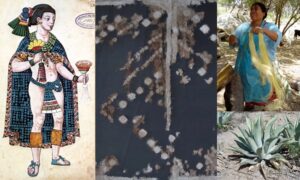 Four selvedge cloth weaving is a discontinuous warp and weft technology that begins with the warp which establishes the size, shape and color of the finished textile. As early as the Wari (500-1000AD) culture, Andean weavers developed a system, the discontinuous loom weaving, which allowed clear color changes in textiles. The highly complex system used a stick, scaffold or called a loom bar. The lost craft is considered a master of textile weaving, as we are unable to decipher their high accomplishments and skills. However, a simpler version of four-selvedge cloth is still woven in villages, Guerro and Oaxaca regions, Mexico. 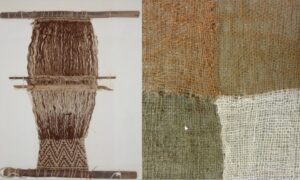 Ikat and shibori (compression-resist) are found in the Mapuche and Ranquel people of Chile and Argentina–ponchos de cacique, worn by chief lineage heads, ritual leaders, and other powerful people in the earlier 20th century. 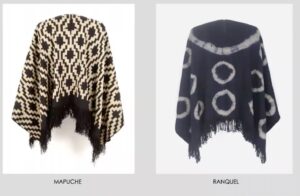 Heirs of Llallin: Mapuche women weavers find the end of the rainbow is a reportage by Pilar Navarrete on Mapuche artisans who visited the Museum of Natural History’s poncho collection, in Santiago, Chile, to reconnect with their ancestral textile traditions. 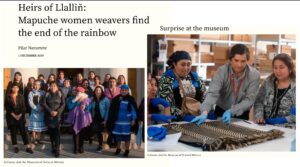 Fuchsine is a magenta synthetic dye that was invented in the mid 19th Century and introduced to the indigenous communities in Mexico by the second half of the century. The costume of men and women from Mixtec town of Santiago Ixtayutla used locally-raised silk dyed with fuchsine to create unique textiles for ceremonial purposes. Called Bleeding Thread, the threads were saturated in the dye, not set, then woven into white cotton cloths, then folded and bunched up into hot water, causing the dye to bleed and transfer images onto opposing textile surfaces. 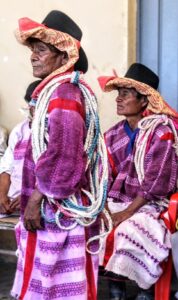 Jim Bassler’s artwork is a prime example of contemporary adaptations into his craft, the traditional four-selvedge weaving and shaped resist dyeing. Inspired by pre-Columbian weaving practices, Jim’s ambitions delve into the sources, Peru to Oaxaca, to research until he is able to create his own renditions using an authentic voice with integrity and curiosity. 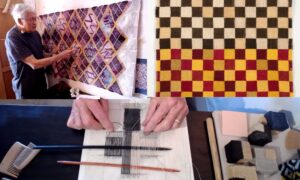 Ana Lisa Hedstrom, inspired by her trip with Yoshiko while filming Natural Dye Workshop 2 in Oaxaca, demonstrates her own experimental journey using fuchsine, while testing upon various methods like arashi, steaming, stitching, and fiber surfaces: paper testing for interesting designs and abstract shadows. 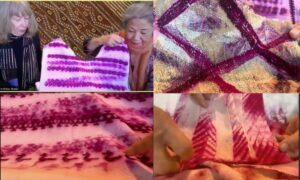 On behalf of Yoshiko, Ana Lisa and the SFS staff, we would like to respectfully thank everyone who has contributed to this series. We hope everyone was as enthralled as we have been with our contributors’ knowledge towards Conversations with Cloth.  “It is always a pleasure to participate in the Slow Fiber dialogues. The online series is a great feature of Yoshiko and Ana Lisa’s extraordinary worldwide connections with artists, makers and scholars.”