On Earth Day, Yoshiko Iwamoto Wada and Ana Lisa Hedstrom, hosted the third episode of Slow Fiber Studio’s Conversations with Cloth online series to celebrate the artistry and skills of shibori artisans and artists who create textiles treasures in Asia. The episode traversed cultural landscapes from Indian Subcontinent and the Himalayas, to Southeast Asia and Southwestern China to Japan by identifying the origins of regional shaped-resist dyeing terminologies whilst learning of lost textile traditions and regional materials. Oral histories, photographs, and material culture from educators, artists, artisans, designers, and collectors were contributed to this episode. Together we continue to shape our efforts to preserve regional cultural heritages of the arts and crafts through sharing narratives to inspire the next generation.

Laharia is a variation of shibori technique specific to Western India. Lahar means ‘wave’ that creates a zig zag pattern when a long rectangular cloth is folded, diagonally rolled by pulling a rope-like shape, and bound intermittently similar to tying of yarn in ikat. Using a finely hand-spun cotton Ducca muslin creates colorful patterns on turban cloths for men and clothing for women of this region.

Bandhani is a centuries old Indian shibori technique that has been nurtured in Western India and Pakistan. Bandh means ‘bound’, a resist that is created by plucking a small bit of cloth often folded in two or three, then bound with fine cotton thread to resist dyes. The British East India Company traded bandhani cloth (rumal) that became popular printed kerchiefs eventually known as the American bandanas often worn by cowboys. 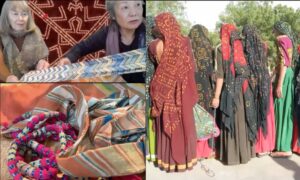 Jabber and Abdullah Khatri are brothers who reclaimed the grandfather’s bandhani craftsman heritage and established a workshop in their hometown in Kutch. In 2001, their business had a turning pint when they were conducting a bandhana workshop sponsored by the World Shibori Network, when Yoshiko introduced them to Cristina Kim, DOSA. From their collaboration, their business grew to support not only their family, but also broader craft for the communities. 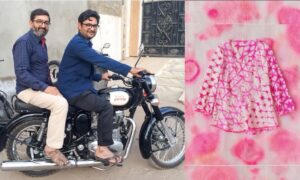 Judy Frater is the founder of Somaiya Kala Vidya (est. 2005) in Kutch, an education for artisans to ensure a sustainable future in craft traditions. By teaching design and business management to traditional artisans, they will gain agency and recognition for their textile practices. Some of the graduates, Aziz Alimamad, Taina Aziz, and Suleman Umarbhai Khatri who were part of the V&A Fabric of India, Santa Fe Folk Art Market, Lakme Fashion Week. 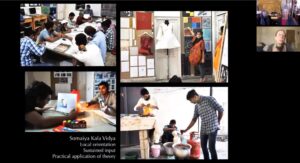 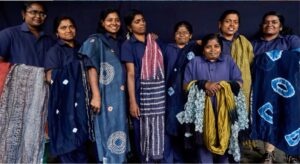 Jorie Johnson, a felt artist, is researching colorful 9th century woolen felt rugs (kasen) in the Shosoin Repository in Nara, Japan for a conservation project. The origins of these kasens are still subject to debate, and she presents two sources. One, traditional Japanese tea ceremony rugs that have the generic term moko-sen, moko means ‘Mongolia’ and sen is ‘woolen floor covering’. Others In the Himalayas are historical Tibetan soldiers using shibori wool coats with stamped and wrapped jammed-shibori of juji (a character ten) motifs.

In the Zhoucheng Village of Dali, a hometown of the Bai people, the tradition of stitch-resist, patterns all dyed in indigo, is still alive and well. Lanxu Eco-Culture Development Center is committed to working with artisans to sustain their communities and regional heritage beyond exporting producers for shibori businesses in Japan. 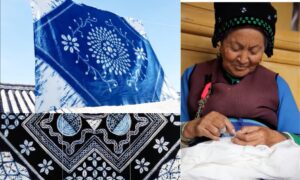 Selendang Pelangi is a ‘rainbow’ shoulder cloth of a Malay-Indonesian origin are known to have been produced in Palembang, Sumatra. The silk cloth is stitched, painted, capped, bound, and resist-dyed in multi colors.

Thomas Murray, a collector and dealer of Asian textiles, discusses the Toraja people in the southern central mountains of Sulawesi with some of the longest examples of shibori textiles in Indonesia. The Pori roto, a ceremonial banner, shows various shibori designs on naturally dyed handspun cotton. Contemporary adaptations of Selendang Pelangi by Ghea Panggabean, illustrate glamorous court textiles rendered in digital printing on silks and cottons. 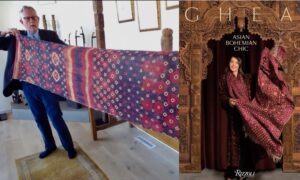 John Ruddy, a collector, specializes in rare silk ikat and shibori textiles of the Cham people in Cambodia. The Khmer term kiet, refers both to textiles and shibori processes. Not much is known about these shibori artisans and the patrons. There are two types of kiet, one is bound-resist, using imported silk and chemical dyes from China creating bright and bold designs. The second, a stitched and bound-resist was naturally dyed on handspun indigenous silk, with delicate motifs. 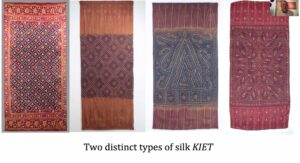 Craig Diamond, a textile collector of the Philippines. There are many indigenous groups in the Central region including the T’boli and Blaan people, who sustain a deep cultural relationship to ikat weaving on abaca and embroidery. The Bagobo people in the mountains produced remarkable stitch-resist and bound-resist costumes on abaca substrate. Abaca is a native fiber from banana plants with a strong resistance to salt and water damage. When the Spanish trade introduced cotton, abaca lost popularity due to its rough and stiff texture. 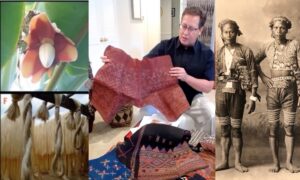 Please join us, on 19 May, for our FINALE Conversations with Cloth: Episode 4 on Pre-Colombian amarras and four-selvedge woven art of James Bassler. Featured shibori textiles include, ponchos of Ranquels from Chile and Argentina, and Mexican skirt.