“Echoes of the Prairie: Works in Cloth” by Susan Lordi Marker

Susan Lordi Marker is recent SDA member, whose work centralizes around themes of natural resources, ecosystems, and mark making. Below, Susan reflects on the many years of creativity and exploration with a retrospective on her own processes.

Several years ago I rescued a remnant of original, unplowed native prairie in Missouri. Since then, I have been on a quest to preserve and protect this precious parcel of land and the creatures that depend upon it.

I immerse myself—learning all I can about prairies; not just by reading, but by doing… restoring and reconstructing the degraded areas, reintroducing native plants that once grew there. This process involves being in close contact with organic forms found in earth, water, plants and wildlife. I focus on the sensory magic of the unique and rare prairie habitat, and its influence on what I make. 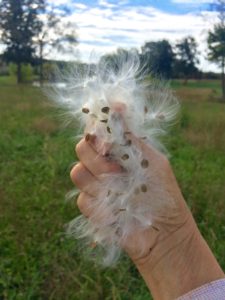 My work reflects my fascination with the overwhelming number of elements surrounding me in this natural ecosystem of abundance, and my realization that every event, no matter how small, is vital to the inextricable web of life.

The prairie ecosystem is so rich and diverse—so alive with a riot of color, texture, moving shapes, sounds, and scents! It demands you take it in with all of your senses. There are always discoveries and surprises. 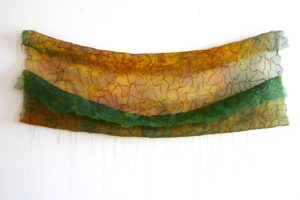 Walking through a field, I am suddenly in the midst of masses of sunflowers as far as I can see. They dance in waves, covered with thousands of tiny winged insects busily mating and munching. All fragile moving parts, making patterns and repetitions, encircling me, and resonating collectively in a low hum… I am mesmerized. In a few days they will be gone, but where? By then, another prairie flower will burst open in multitudes, taking the sunflowers’ place, and bringing other insects that have evolved with it. 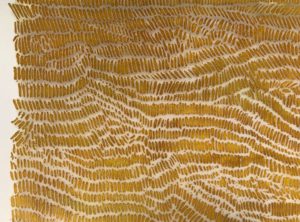 I turn around. Scores of tree swallows are dipping and diving aerodynamically over the pond at high speed, perfectly choreographed, tracing sweeping arched lines in the sky, then making concentric ripples in the water as they kiss the pond surface. Constantly twittering to each other, their joyful pace never abates. They have no fear. They never collide. 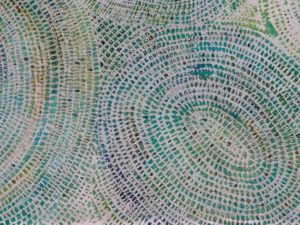 Such natural happenings suggest to me rhythms, patterns, and cycles. Ethereal wing patterns of a newly metamorphosed dragonfly, the low pulsating drone of bullfrogs at night, mathematically arranged seed heads unfolding. I observe and anticipate these natural occurrences—how they gradually emerge, change and repeat as if according to plan, season after season, year after year. 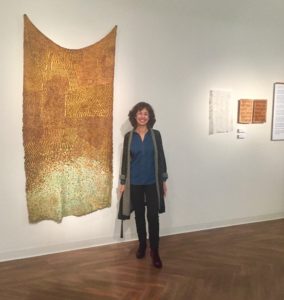 The prairie unfolds before me. It’s the unexpected discoveries, the surprise happenings in nature, that are inspiring and comforting to me at the same time,… and so I spend a lot of time in the company of seeds, wild things, and dirt. 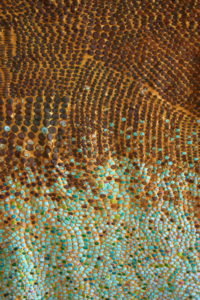 Back in my studio, I impose my own ordering of marks on cloth. These repetitive visual marks are recordings of what I see, hear, and touch. For example, I can express a sound I hear with a line or a shape. Cloth, as my medium, manifests the natural tactile environment from which it came. 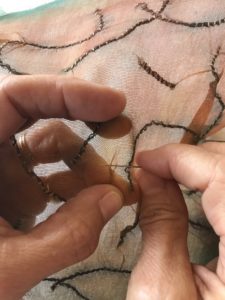 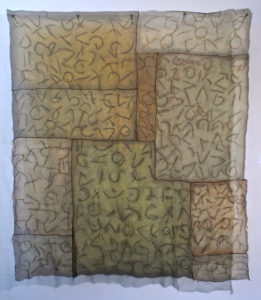 Outdoors, I am conscious of millions of elements being coded—they fit together—and it is this orchestration that energizes me. A harmony of flight patterns, a cacophony of calls and cries at dawn, the simple repetitive drumbeat of an incessant insect. My work is in response to nature’s rhythm.

I love the vulnerability that cloth shares with the natural world—fragile and tenuous, but also resilient and strong. Much of the fabric I use is derived from plants (linen, cotton) or insects (silk), so it is a natural medium for expressing the tactile quality of outdoor elements.

I usually cover the entire textile, presenting a multitude of marks. I’m interested in the impact that numerous marks make, collectively. Manipulating the cloth changes its inherent structure and weight, and that change determines its overall shape and the way it hangs in space. I like that the process can, at times, dictate the form. 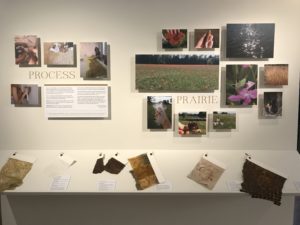 Susan Lordi Marker Echoes of the Prairie: Works in Cloth exhibit of touch samples for viewers to interact, explore, and understand.

I’ve been a member of SDA since 1990 with the exception of a few years. In the early years, I helped plan conferences, taught workshops and made some wonderful friends. The camaraderie and support of other members, and the opportunities to publish and exhibit work has been crucial to my development as an artist. The SDA journals have introduced me to new emerging artists, techniques and innovations in our field. I have decades of Journals in my studio, but can’t bear to recycle a single one, as they’re still full of relevant ideas and people. SDA is a professional, worthwhile and fun organization for which I’m grateful.

Susan Lordi Marker’s art textiles have been exhibited and won awards in the US and internationally. Susan is also the creator of Willow Tree®, distributed worldwide. Her studio is in the Kansas City Crossroads Arts District. 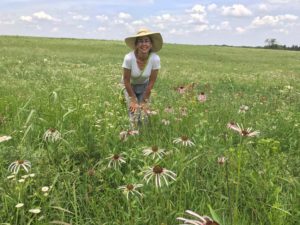 Susan Lordi Marker on the prairie.

If you would like to propose an article for SDA’s blog, fill out our Blog Post Submission Form