Everything has been Material for Scissors to Shape

Back in June, I took a trip to Seattle and saw Everything has been Material for Scissors to Shape– curated by Namita Gupta Wiggers at the Wing Luke Museum of the Asian Pacific American Experience. The exhibition featured a series of pairings connecting pieces from The Wing’s collection with artworks by contemporary artists of Asian heritage. I was fortunate to meet up with Namita afterwards to further discuss her thoughts behind the show. What resulted was an in-depth walkthrough, of both personal and historical stories. 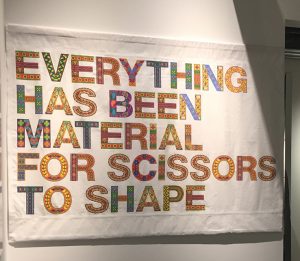 Banner for Everything has been Material for Scissors to Shape
Designed by Shantanu Suman and printed by Spoonflower (2016) (photo: Namita Wiggers)

The show gets its title from Pablo Neruda’s Ode to a Pair of Scissors. The typeface for the show was designed by Shantanu Suman (director of Horn Please) and based on embroidered pieces from the museum’s collection. Instead of being painted onto the wall, the sign instead hung as a textile piece.

When you first enter the exhibition, you are confronted by Surabhi Ghosh’s architectural installation, A Hair’s Breath, The Unfurled Sea (2016). Its collection partners are a khadi bag and a pair of sandals from India, intended to highlight Indian textiles the museum has while also connecting Ghosh’s personal history to Gandhi and his use of khadi cloth in India’s fight for independence from British rule. This juxtaposition questions history and myth, as well as personal and public history. 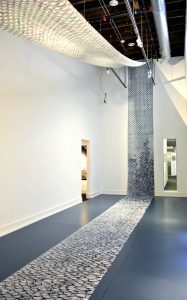 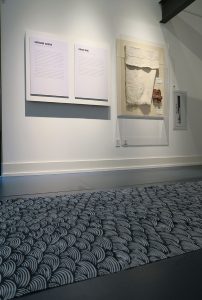 Khadi cloth and Sandals from The Wing Luke‘s collection
With Surabhi Ghosh A Hair’s Breath, the Unfurled Sea in foreground (photo: The Wing Luke)

Ghosh’s installation is a blend of two Hindu myths- one of Ananta and one of Draupadi. The fabric’s snake pattern references the serpent, Ananta, who cradles Vishnu when he is asleep, while the woven hair references the Draupadi myth from the Mahabaratha.

“Consider the title “Everything is material for scissors to shape” and how homespun khadi cloth and the way Indian garments like saris work —  you don’t have to cut them the way you do with European-based clothing. Indian cloth is turned into a garment through draping, not cutting, piecing, and sewing. No scissors are needed. Imagine how scissors might have changed the story of Draupadi or Ghandi’s dhoti if they’d been used” – Namita.

The sandals are an homage to Namita’s grandfather who cycled twenty pairs outside his room, sending broken ones to be fixed again and again. 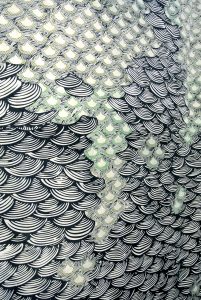 From Ghosh’s epic myths, national history, and personal identity, you move onto Stephanie Syjuco’s Cargo Cults (2013), which questions identity formed through commodity culture, industry, trade, and the simplification of culture to a sign. The partnered baskets from The Wing’s collection are specific to different Asian cultures and exemplify skill and tradition in a very deliberate way. As opposed to simply going to Pier One and buying a basket that says “Made in Taiwan” where the culture has been so simplified. The basket = the culture. 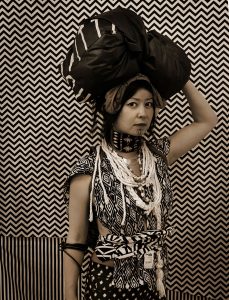 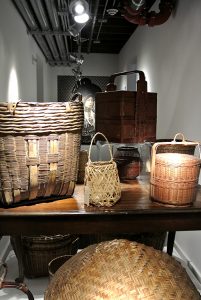 Baskets from The Wing Luke‘s collection
With Stephanie Syjuco Cargo Cults in the background (photo: The Wing Luke) 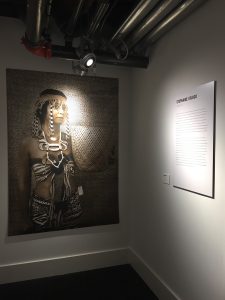 The final textile-based contemporary piece is Aram Han Sifuentes’ A Mend: A Collection of Scraps From Local Seamstresses and Tailors (2011-2013). 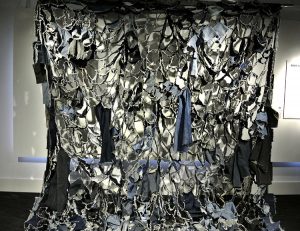 The piece is made from cut offs of blue jeans, gathered from Korean seamstresses in Chicago. Unlike typical quilts, it does not provide any comfort. Instead, the batting in the middle is empty space. Sifuentes uses denim because it exemplifies American identity – it is “our” garment – made personal through the hands of immigrant tailors. The piece is partnered with video interviews from The Wing’s archives about what it was like to be the child of a garment worker or a garment worker yourself in the 80s. What is great about these archives is that all the people were specifically named, you knew exactly who did the work before factories were moved overseas. 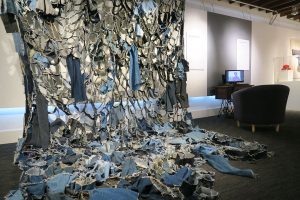 Aram Han Sifuentes A Mend: A Collection of Scraps from Local Seamstresses and Tailors
Jean scraps and gold denim thread, chart printed on vellum (2011-2013) 9’x15’
With Video Archives from the collection in background (photo: The Wing Luke)

The final part of the exhibition is an interactive embroidery space also inspired by the many embroidered pieces in The Wing’s collection. Green Eileen donated old clothing from their return program in order to prevent it from going in the landfill for people to stitch on. “Moving through the exhibition, you [start] with a connection to a place of origin, in this case India. Surabhi Ghosh’s piece introduces the economic challenge khadi cloth played in establishing an independent country. Moving, then, to Stephani Syjuco’s work calls out objects that are exchanged, and further complicates questions about how and commodities are inextricably intertwined with identity, heritage and place. Concluding with Aram Han Sifuentes’ work locates textiles in the US, the place where Asian Americans reside now. The piece came to mind after hearing Aram speak about it in 2014. It brings the loop full circle from Asia through trade and to Seattle’s own historic textile, where factories are now replaced with efforts at sustainable garment practices by Green Eileen“ 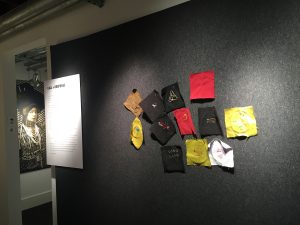 To give inspiration for the embroidery to visitors, the same textiles that inspired Shantanu for the typeface- are on view. The textiles on display change periodically to offer pan-Asian cultural connections in addition to Indian, Filipino and Korean heritage, the main ones featured in the show. Visitors can add their own embroidered responses in the exhibition. The Wing is working with local quilters on programs, and hopes that the local Hmong community will transform the squares into a new piece. 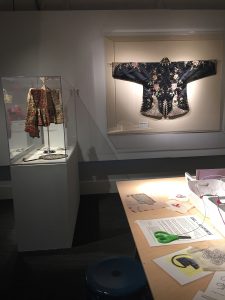 Namita would love to do another exhibition like this one, on a larger scale to incorporate more objects and conversations. The show wasn’t about telling a story, with or for an artist, it was about constructing an installation to ask questions.

It was so great to sit down and hear more about the exhibition from Namita herself. The way she was able to transform the impact of the pieces by juxtaposing them with items from the collection truly makes a shift from the museum as space to the museum as medium. I look forward to sitting down with other curators, historians, artists, and makers and share their stories with you as well. 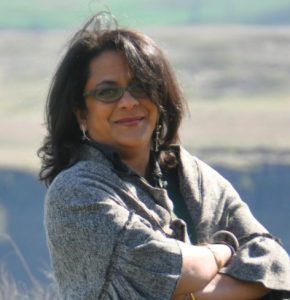 Namita Gupta Wiggers is Director and Co-Founder of Critical Craft Forum, Instructor at MFA Applied Craft + Design, and Former Director and Chief Curator at the former Museum of Contemporary Craft.

Critical Craft Forum and The Wing Luke will be releasing a podcast of Namita’s curatorial walkthrough in November at www.criticalcraftforum.com