Stewart Kelly has been an artist for over 20 years, and with that comes so many memories of exhibitions, projects, and learning. This article reflects on his 20 years of creative practice and what’s he’s learned along the way.

“I have always instinctively drawn, stitched and constructed objects. It was my interest in drawing which led to enrolling on a foundation course in art and design at a local college.” 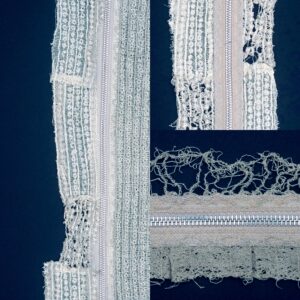 “I recall being very exciting to travel to Paris as a teenager, and meet industry professionals. I remember talking to Italian textile agents who were so passionate and animated when they talked about cloth.”

Following this, Stewart received an Arts & Humanities Research Board postgraduate award to study for an MA in Textiles at Manchester Metropolitan University, specialising in fine art textiles. 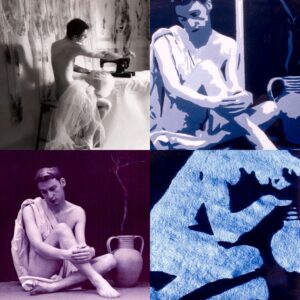 “The week I arrived in Manchester coincided with the 9/11 terrorist attacks. As a sense of uncertainty rippled across the world, I found myself in a new city, not knowing anyone, and unsure how my work would evolve.”

The human form had become central to Stewart’s work. However, rather than just focusing on process, Stewart wanted to delve beneath the surface, and explore themes within his work. 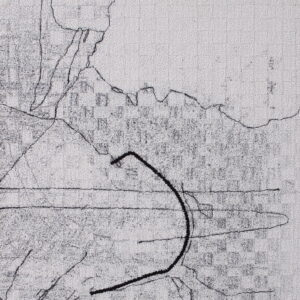 “The course offered me the opportunity to study the correlation between theory and practice. Themes which became relevant to my research included self-portraiture and the projection of identity.”

Following his studies, Stewart acquired a studio at Bankley Studios & Gallery in Manchester. Acquiring a studio offered a renewed focus for Stewart’s practice, and marked a successful period in exhibiting his work. 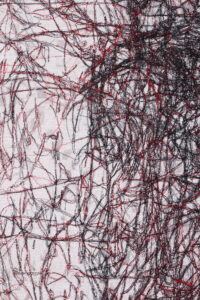 “Subliminally, my work often reflects events in my own life. I was interested in developing a new body of work which would enabled me to connect with different artists, authors and curators around the World.”

The project was called Face to Face, and the pieces were constructed in several stages. Initially, Stewart made several observational studies of faces using ink on paper. He then began to arrange the faces in the form of a collage before stitching over the surface. 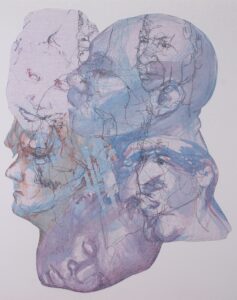 Over the last 20 years, Stewart has worked in the field of arts and mental health, facilitating creative projects in hospitals, occupational health settings and community venues. 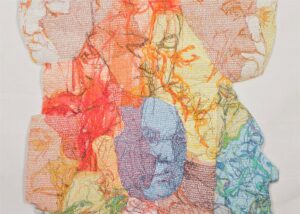 “I have a continuing professional interest in studying how the visual arts may be used as a means to enhance an individual’s physical or mental wellbeing.”

During 2018, Stewart was invited to develop a series of works to be photographed and published in a forthcoming book exploring the theme of art as medicine. The author selected certain artists to submit works which reflect upon how creativity can assist an individual in recovering from a period of physical or mental ill health.

Subsequently, Stewart established the Body Mapping project, which was a personal project incorporating text with stitch, and resulted in three new sculptural pieces. Prior to starting this project, Stewart completed a Foundation Course in Art Therapy with the British Association of Art Therapists. 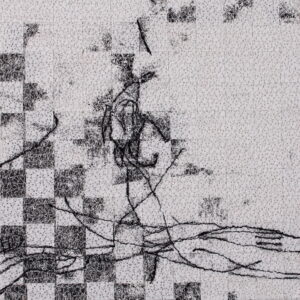 ‘During the course, I was able to experience and participate in several creative and reflective activities art therapists utilise in their practice. The course was enlightening and was instrumental in helping me develop the pieces for this project.”

During November last year, Stewart travelled to India. He went to West Bengal and visited artists, often in remote villages, working in their studios. Stewart was particularly interested in researching Indian embroidery, specifically Kantha embroidery which is synonymous with this region. 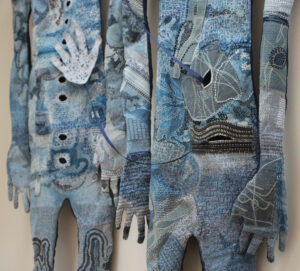 “Although there is a wealth of traditional textiles produced in India, the thoughts I came away with, and what moved me the most, was the lives of the artists I met. Many of whom work very long hours, tirelessly investing their skills in their work, for often little reward.”

On his return to the UK, Stewart began to revisit drawings he had made prior to my research trip. The drawings consisted of multiple figure drawings, recording different observations over a period of time. At the studio, he began to stitch on to the surface of the drawings. 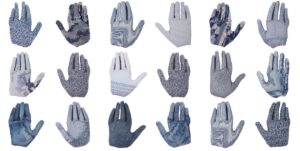 “The stitching was a continuation of the drawing. This process of working allowed me to consider repetition, labour and ritual through intensive periods of sewing.”

As these pieces evolved, the gradual build-up of stitches has become more intensive. Stewart frequently had to add additional support to the work, as the perforated paper began to break away. Stewart often stitches on the reverse side of the work, unaware of the image that is evolving. The image has almost become irrelevant, and the process of accumulative, repetitive stitching has become a focus in the work. 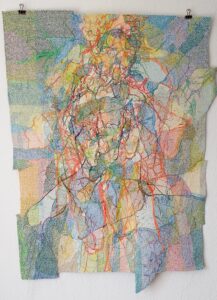 “Through the development of these pieces, I have considered how stitched artworks can document both physical and emotional experiences. The intimacy of the medium itself, with its suggestion of repetitive touch, lends a poignancy to bodily associations. The work also provides an intimate and ambiguous trace of the artist’s presence.”

Stewart Kelly is an internationally recognised artist based in Manchester, United Kingdom. Over the last twenty years, Stewart has shown his work in over 100 exhibitions in the United Kingdom, Europe, USA, Canada and China.