From open-source protest banners, knitted brain hats in the name of science, and world record-breaking blankets in South Africa, this week’s Friday Fibers Roundup looks at how the fibers and textile is community coming together in these tumultuous times. 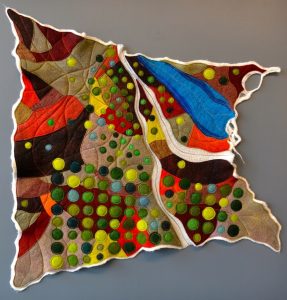 1) Stephanie Syjuco (Professor at UC Berkeley) is openly sharing and disseminating her patterns for fabric protest banners in order to create “visual evidence of the anger and fear and the feelings of resistance.”

2) In “From Knitting Hobby to Profession”, Erika Ruhl recounts how her grandmother teaching her to knit as child transformed and shaped her understanding to her profession in archaeology.

4) Based on her keynote address at the Textile Society of America’s closing night, Professor Laurel Thatcher Ulrich’s “An Orphaned Sewing Machine” examines the machine’s life, how it fits into an institution’s collection, and how people relate to everyday objects (via Harvard Magazine).

5) The Susan Dye Blog recently shared information on growing and processing woad for natural dyes. Check out this article and more on various natural dyes stuffs on the rest of blog.

6) Artist Alexis Arnold creates crystallized books, freezing them in time and calling to attention both their physicality and diminishing presence in our everyday lives (via Colossal).

7) The Record for World’s Largest Blanket was recently broken by prisoners from Drakenstein Correctional in Cape Town, South Africa. Hundreds of inmates were honored with the official certificate after creating 139 individual blankets which were then stitched together (via IOL).

8) Want to learn how to knit a brain hat for March for Science on April 22, 2017? You’re in luck because this tutorial shows you how to create the squishiest, funniest, creepiest, and smartest hats (via Studio Knit).

9) The exhibition Tracing the Remains by Sabrina Small and Caitlin McCormack examines decomposition of the human body, a natural cycle from the first breath to the final beat. The show is on display at The Mütter Museum until July 6th, 2017.

10) Artist Natalie Baxter was recently on the Jealous Curator’s podcast talking about her series WARM GUN, in which she creates stuffed, tasseled, and bloated guns and flags to comment on America’s political state.