This week’s Friday Fibers Roundup features artists who are either pushing borders–conceptually or politically–as well as making work referencing the literal borders around us. 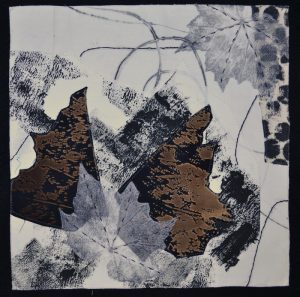 1) “Unraveling a Racist Flag with Sonya Clark” by Cassie Packard spotlights Clark’s recent project in which she invites gallery goers to assist in unraveling a Confederate flag (via Vice).

2) “Guatemalan Artisans are going after 64,000+ Etsy Products for Copyright Infringement” by Whitney Bauck looks at how a group is fighting back against both cultural appropriation and straight up stealing of their culture and ideas (via Fashionista).

3) Aram Han Sifuentes’ collaborative project, The Protest Banner Lending Library, was recently nominated for the 2017 Beazley Designs of the Year (via CNN).

4) The exhibition What Were You Wearing? looks at the outfits people were wearing when they were sexually assaulted, and is co-organized with Kansas University’s Sexual Assault Prevention and Education Center.

5) “Treading on Euphemisms for Women” by Barbara Pollack reviews Lin Tianmiao’s (one of China’s most celebrated contemporary artists) who covered the floor with a three-inch-thick carpet literally woven out of dozens of words for woman (via Hyperallergic).

6) “This Artist Gathered 2,000 Words for Women—and Now, She Wants You to Walk All Over Them” by Sarah Cascone also looks at Lin Tianmiao’s installation at Galerie Lelong that puts contemporary language on top of antique carpets.

7) “Of Cats and Dogs: Parsing Public Displays of Art-fection” by Elliot Reichert looks at activism within the art and craft realm and what projects are and aren’t doing it right (via Newcity).

8) “2,000 Miles Of Yarn To Make Up Border Wall Exhibit At Smart Museum Of Art” by Sam Cholke looks at the project which aims to create works made from the same length of yarn as the proposed Mexican border wall proposed by the current Presidential Administration (DNA Info).

10) “A Mexican-Born Artist, Activist, and DACA Recipient Considers an Uncertain Future” by Laura Calçada examines the work of Maria de los Ángeles, her relationship to her adopted country, and what DACA means in her life (via Hyperallergic).