This week’s Friday Fibers Roundup spotlights recent articles on embroidery, hand-stitched, and some amazing projects being done in the field. 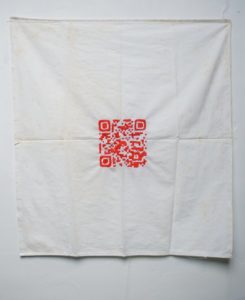 1) “The Calming Effects of Sewing Can Help People Express and Heal Themselves” by Clare Hunter explores how absorbing your concentration in needlework relieves inner turmoil (via The Guardian).

2) Finnish artist Noora Schroderus hand-embroiders hairstyles inspired by female European folktales characters onto the leaders featured on US and British currency. The banknotes also explore aspects of industrialization—pinning the production of money and capitalism against the slow process and gesture of handmade embroidery (via Colossal).

3) This video illustrates Sashiko mending—a Japanese form of repair and translates directly as “little stabs”—that is typically carried out with a white cotton thread on indigo fabric (via TOAST magazine).

4) “Embroidered Vintage Postcards–In Pictures” by Imogen Bagnall looks at the work of Llandudno-based textile artist and designer Francesca Colussi, whose work gives old postcards a second life with embroidery (via The Guardian).

5) Episode 5 of Book of the Week features: “Threads of Life: A History of the World Through the Eye of a Needle” in which textile curator Clare Hunter reveals how feminist artists of the 60s and 70s reclaimed the potency of needlework to celebrate women’s achievements (via BBC).

6) “How to Make Your Own Free Embroidery Pattern (and Download Others for Free)” by Jessica Stewart spotlights Stitchboard—a free cross-stitch pattern maker (via My Modern Met).

7) This video shows a beautiful piece of embroidery from WWI that has been discovered in chest of drawers in Stoke-on-Trent. It was created by soldiers in 1917 to help them get over their experiences in the trenches (via BBC Midlands).

8) “Women who Embroider the Air” by Erla Zwingle spotlights how the fine art of hand-sewn lace somehow remains alive in a small island off Venice (via Craftsmanship Quarterly).

9) “Sewing Needles Reveal the Roots of Fashion” by Jacob Pagano looks at how humans have crafted garments for more than 40,000 years—and prehistoric tools suggest that warmth wasn’t their only concern (via Sapiens).

10) “Why a Museum Owns a Chocolate Company’s Embroidery Collection” by Anne Ewbank looks into the history of Whitman’s Candy and how they sought embroideries from local dealers to draw customers to their stores and showrooms (via Atlas Obscura).