This week’s roundup looks at the histories of protest from a wide range of views: from fashion, to contemporary Native American artists, and celebrities. 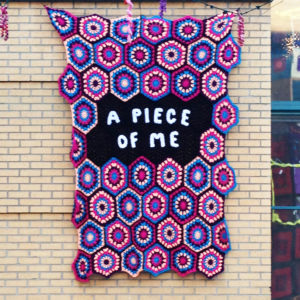 1) “The Perils of Using Fashion for Protest” by Connie Wang examines the pussyhat, safety pins, and other fashion items that have been used as symbols for protest, and what (if anything) they actually accomplish (via Refinery29).

2)“Some of the Most Provocative Political Art is Made With Fibers” by Leslie Camhi spotlights how fibers can be an expressive medium, one more powerful, perhaps, for its ubiquity (via The New York Times).

3) “37 Artists Native to the Americas Weave Stories of Migration and Geography” by Jillian Steinhauer looks at the exhibition Monarchs: Brown and Native Contemporary Artists in the Path of the Butterfly, on display at the Bemis Center for Contemporary Arts, Omaha, Nebraska (via Hyperallergic).

4) “Red Carpet Protests are as Old as Award Shows” by Raquel Laneri looks at the history red carpet protests and the evolution of what has been protested (via NY Post).

5) “Ingeniously Re-designed World Map Looks Unusual, but is Highly Accurate” by Jessica Stewart showcases a different way of seeing the world, contrary to the one most are taught in school, which contains enormous flaws. For one, both Antarctica and Greenland are represented as much larger landmasses than what is accurate, while Alaska is shown to be as big as Brazil, even though Brazil is nearly five times its size (via My Modern Met).

6) “Craft’s Long History in Radical Protest Movements” by Jessica Bateman looks at how knitting, embroidery, and other crafts can be powerful tools in the fight against fascism and the patriarchy (via The Establishment).

7) “Quest for Beauty: The Anonymous Artists of Chinese Textile Collages” highlights ephemeral textile “paintings” by a group of women in China, whose works are ones of extraordinary beauty (via Moo Won).

8) “How does A.I. Art stack up Against Human Art?” by Sheila Kumar puts senior art critic Jerry Saltz in a position to see and critique art made by artificial intelligence (via Vice).

10) “An Ultrathin, Super-Stretchy Nanomesh Skin Display is the Future of Wearables” by Chelsea Gohd looks at a new teach created by an academic-industrial collaboration led by Professor Takao Someya at the University of Tokyo’s Graduate School of Engineering (via Futurism).

Also, Friday Fibers Roundup will be switching from posting every Friday, to now on the second and fourth Fridays of the month!