Fashion Revolution "Who Made My Clothes?"

This week’s Friday Fibers Roundup features ten articles that spotlight the past, present, and future of knitting; with themes touching on technology, craft, restoration, and more! 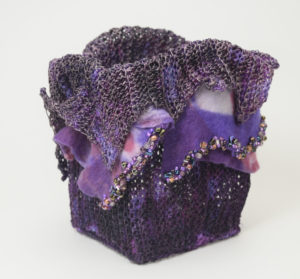 1) “Imaging Tool Unravels Secrets of Child’s Sock from Ancient Egypt” by Caroline Davies looks at how a non-invasive technique devised by British Museum shed light on dyeing and weaving processes used in ancient objects (via The Guardian).

2) “Ingenious Rocking Chair Knits a Hat for You as You Sway Back and Forth” by Sara Barnes features Rocking Knit, a chair by designers Damien Ludi and Colin Peillex, which uses kinetic energy, produced from the rocker’s gliding motion, to knit a winter hat as you gently sway back and forth (via My Modern Met).

4) “Focus: Stitching Together a Knit Theory” by Michael Schirber examines the science behind knitting and its mechanics, stretching force, and more (via APS Physics).

5) “New Technology Can Translate Your 3D Computer Model Into Knitting Instructions” by Joaquin Gonzalez looks at how researchers at Carnegie Mellon University’s Textiles Lab have created an algorithm that translates 3D shapes in computer models into instructions for automated V-bed machines, a common piece of industrial knitting equipment (via WESA).

7) “The Future Is Knit: Why the Ancient Art of Knitting Is High-Tech Again” by Julian Goldman looks at how new kinds of knitting are poised to fundamentally change how we think about everyday knits, making our bodies more connected than ever to the computerized world we live in (via Gizmodo).

8) This video shows how a digital knitting machine can “print” garments.

9) “Is this the most beautiful show of the year?” by Sebastian Smee claims that Ruth Asawa: Life’s Work, on display at the Pulitzer Arts Foundation is the most beautiful. The show features suspended hanging sculptures and works on paper by Asawa from decades of dedicated studio time (via Washington Post).

10) “Teenagers, Forget Engineering. Your Future Is Craft” by Elisabetta Povoledo spotlights how Fendi (and other companies) are attempting to address the Italian national youth unemployment crisis by luring a new generation into becoming traditional artisans (via The New York Times).