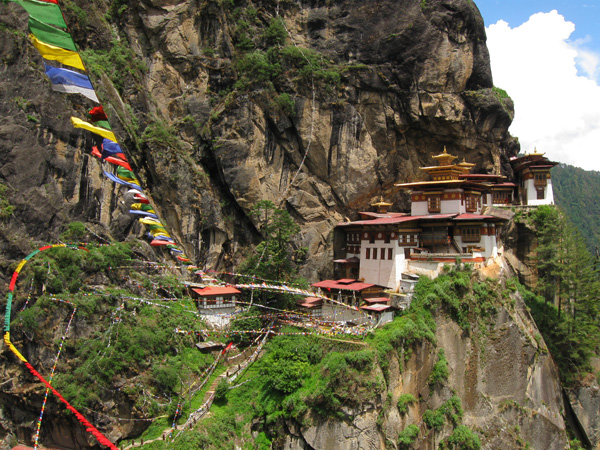 Sometimes opportunity knocks so hard you just have to answer! 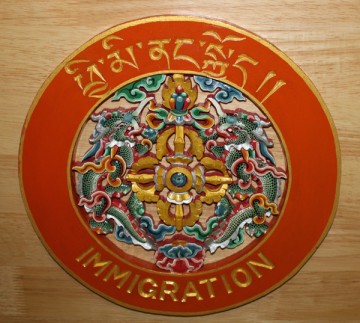 The opportunity was a trip to Bhutan and the knock came from a relative who was a professor at the Royal College of Thimpu. Throwing caution to the wind, I rearranged my work schedule—not an easy task as a new college graduate—and decided to take the big step through that door of opportunity. 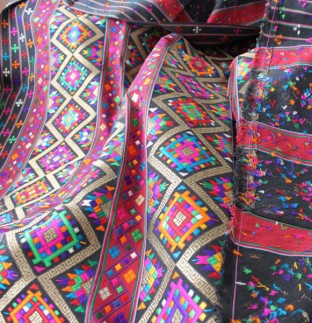 The country of Bhutan, nestled between Nepal, southwestern China (formerly Tibet) and India, is well known among artisans for the high value it places on its traditional arts and crafts. The government encourages refinement of artisanal skills handed down for generations. Bhutan has also received recent acclaim and attention for its concept of measuring Gross National Happiness (GNH) in an effort to support a more holistic standard of living for the Bhutanese people. In an informal interview with Bhutanese locals, it was stated that knowing the value of their traditional arts is an important part of their GNH and an important part of maintaining their cultural identity. The GNH posters and abundant decorative arts on view at Paro Airport signals to the new arrival that this is also an official position of the Bhutanese government. 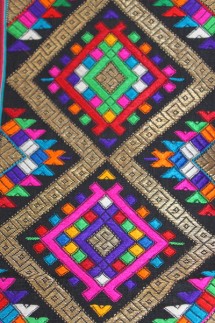 Bhutanese makers are known mostly for their textiles, carvings and graphic art. Bhutan’s capital city of Thimpu is home to the National Handicrafts Emporium where visitors can purchase handmade items from textiles to hand-carved wooden objects for the home, masks of festival deities, religious icons known as thangkas and medallions and jewelry, to name just a few. 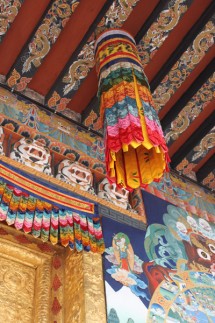 Artisans whose wares are sold here have the advantage of being supported by a fair trade policy that stipulates they must be paid a living wage. Buyer/collectors are educated to appreciate the long apprentice years – as many as 6 for a weaver – that must be completed before their work can be shown. For the visitor/tourist, fair trade pricing eliminates the amazing deals often found in less market-savvy and remote regions of the Himalayas, but this is tempered by the knowledge that the artisan was paid fairly! I returned with several artworks to inspire my own future work.

The most exciting part of the visit for me, a lover of surface design, was to experience arts/crafts playing an integral and revered role in the Bhutanese culture, especially the rich visual symbols of the practice of their Tibetan form of Mahayana Buddhism.

The traditional garments of gho for men and kira for women seems to indicate the pride and daily value placed on traditional forms – until one learns that this choice of dress is actually a government mandate and sartorial law (visitors exempt). However,  many Bhutanese wear the gho and kira voluntarily, especially in rural communities. In the capital and larger towns, Western fashion influence shows up in accessories; Western shoes and socks for men; top designer handbags, shoes and jewelry for women. Everyone carries the very untraditional accessory of a mobile phone. 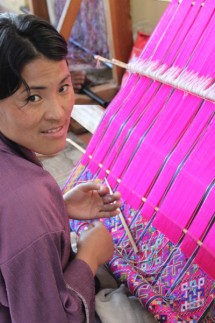 I visited the National Textile Museum in Thimpu which was showing the history of Bhutanese dress and textiles along with the most amazing live demonstration of weaving imaginable. The technique, a form of supplemental warp and weft that looks like an embroidered chain stitch in many areas, is performed with lightening-quick speed. A infinite variety of traditional patterns are made more contemporary and fresh with new color relationships. 3 narrow, intricately woven panels are stitched together to create the wide kira for women. When made with silk warp and weft they sell for $6,000 (270,000 nultrum) — so, yes, the Bhutanese do put a high  value on their work. Silk kira take one full time weaver many months to weave, with many weavers receiving their extensive training at the Royal Textile Academy of Thimpu. 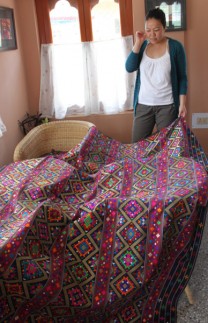 A friend of the professor who hosted us owns a café just off the beaten track in Paro where she brought in an heirloom kira from the 1960s. It had been woven in traditional color schemes with cotton ground and silk supplemental weft designs and worn by her grandmother at festivals. This kira took over a year to weave in an unnamed remote village.

In addition to valuing their traditional designs, a few artists are re-defining and expanding the definition of Bhutanese art in shops and outlets such as VAST, a contemporary art center, in downtown Thimpu. I met an impressive and emerging deaf artist working in oils that depict a mystic/realistic view of the famous Tiger’s Nest Temple. And though I was not allowed to take photos here, I was stunned by the image of a Bhutanese youth wearing a gho, with scriptures from traditional prayer wheels swirling around him, while ear-plugged into an iPod.

I am still awestruck by the prolific and detailed Bhutanese design and am glad I took the chance see the land of the gho and kira. The value placed on making and the measure of Gross National Happiness sent a strong ripple through my newly-graduated soul. The visit also renewed my love of color! 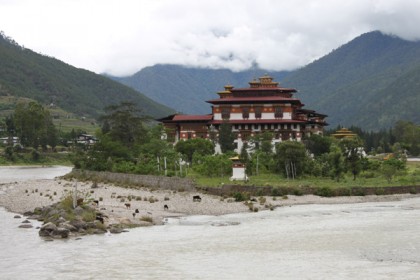 Now I must get up and go seek my way beyond my academic studies and also say goodbye as my term as SDA student representative comes to a close. Congratulations to other graduates. Good luck to those of you continuing on with your studies. No matter where you are on your life path, may opportunity knock loudly on your door! 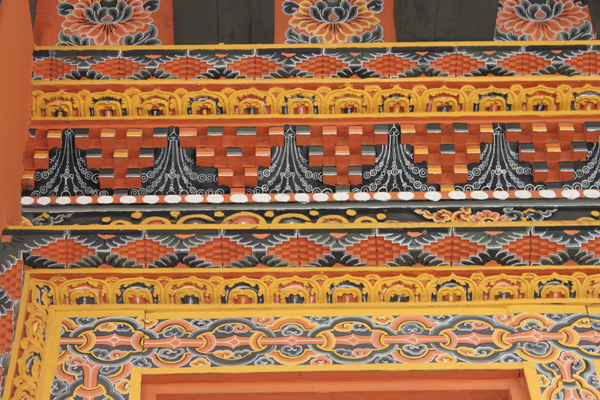