“Heavenly Bodies: Fashion and the Catholic Imagination” by Lauren Sinner

The Costume Institute’s exhibition, Heavenly Bodies: Fashion and the Catholic Imagination is currently on display at The Met Fifth Avenue until October 8th, 2018. The thematic exhibition features conversations between both historical and modern fashion, and masterworks of medieval art from The Met’s collection. Heavenly Bodies examines fashion’s ongoing engagement with the devotional practices and traditions of Catholicism. 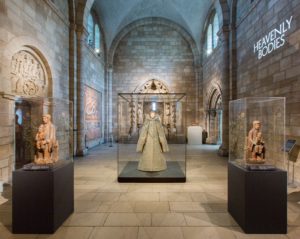 When you first enter the exhibition, gregorian chant music plays in the background, immediately setting the atmosphere of what’s to come. Everything on display is lit in very dramatic spotlights while the rest of the space remains dark. The combination of lighting and sound make for a very calm, eerie, and beautiful atmosphere. 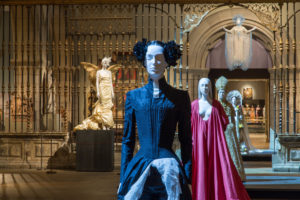 One of the most amazing elements of Heavenly Bodies is the fact that it features approximately 40 ecclesiastical masterworks from the Sistine Chapel sacristy, many of which have never been seen outside the Vatican. Encompassing more than 15 papacies from the 18th to the early 21st century, the work on display include papal vestments and accessories. The last time the Vatican sent a loan of this magnitude to The Met was in 1983, for The Vatican Collections exhibition, which is the Museum’s third most-visited show. 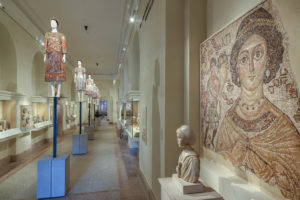 Providing an interpretative context for fashion’s engagement with Catholicism are more than 150 ensembles, primarily womenswear, from the early 20th century to the present, on view in the Byzantine and medieval galleries. The presentation situates these designs within the broader context of religious artistic production to analyze their connection to the historiography of material Christianity and their contribution to the construction of the Catholic imagination. 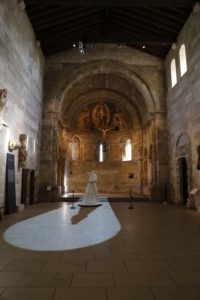 What I think Heavenly Bodies does weill is illustrate a vast range of style and aesthetics by people who either current are or were a part of the Catholic Church. The level of craftsmanship used in the garments is something that is awe-inspiring, regardless of affiliation to the church. I’d love to see an exhibition of this caliber focusing on religious fashion from a different religion in the future. 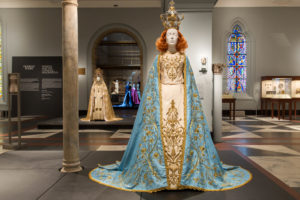 “Fashion and religion have long been intertwined, mutually inspiring and informing one another,” said Andrew Bolton, Curator in Charge of The Costume Institute. “Although this relationship has been complex and sometimes contested, it has produced some of the most inventive and innovative creations in the history of fashion.” 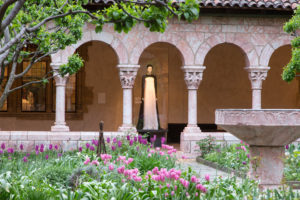 For more views of the exhibition, check it out in person, or watch this video.