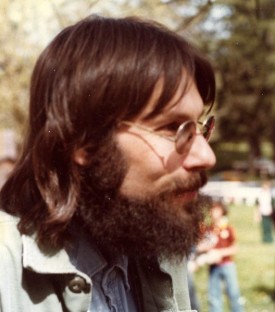 Stephen Blumrich, a Fiber Founding Father of SDA – and especially Surface Design Journal – passed away suddenly on February 23, 2015 from complications related to polio he contracted during his childhood in Germany and Austria.

His wife, Terry Blumrich, kindly provided the following biographical information about him so that who he was and what he contributed to the mid-20th century fiber arts resurgence might be fully appreciated. Read on to find out more about his role in the evolution of SDA Journal from early SDA member Rebecca Arkenberg, who first notified SDA staff of his death.

Born in Gotha, Germany in 1941, Blumrich studied weaving in Linz, Austria, then opened a small weaving workshop there. In 1958, he relocated to the USA when his father, a designer of aircraft, accepted a job at NASA Space Program in Huntsville, Alabama. 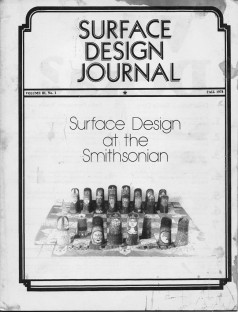 With no work for weavers in Huntsville, he moved to NYC, where he got a job weaving custom sample fabrics for Woolmark (more on that in his own words, below). He later moved back south to work as a draftsman at engineering firms (including Martin Marietta), met and married Terry, then moved to San Francisco.

Ever-interested in textiles, when the batik process fell on his radar he found he had a real knack for color and went on to create colorful, intricate work using that resist technique. He entered art & craft shows, had work in both solo and group shows and won many awards. (See 3 of his puppets in collection of Smithsonian American Art Museum here).

He taught workshops and promoted “surface design” before there was a Surface Design Association, then volunteered – along with many others – to bring the first conference, first newsletter and the association itself into being. (See Arkenberg’s detailed SDA timeline below.) 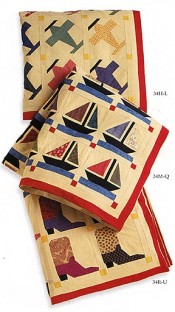 Blumrich and family moved to a sheep farm in Oregon then to Tennessee, where he added disc-jockey to his other professional pursuits. In 1982, he and Terry started Pea Ridge Purdies, a folk art work/shop for making quilts and dolls. The business lasted 20 years, taking wholesale orders from an international who’s who of lifestyle trendsetters like Pottery Barn and Macy*s.

Once retired, the couple pursued their long-time interest in antiques – both buying and selling. Terry observed that Steve was active and interested in life and all the world around him until the very end.

I think that everyone who met or worked with Steve will remember his boundless energy and enthusiasm, his charm and intelligence, his great stories and sense of humor.  I will miss him terribly.

I met Steve Blumrich in 1976 at the 1st Surface Design Association conference in Lawrence, Kansas. I had seen his work in Sphere (The Betty Crocker Magazine) and was blown away by the precise lines and gradations of color that he achieved in his batik pieces.

I immediately invited him to give a workshop in Casper, Wyoming, where I was living at the time. That fall he gave a wonderful class to the handful of batik artists in the area. 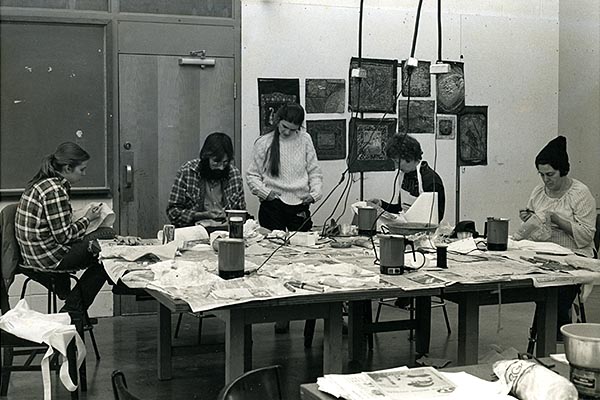 Steve and I continued our correspondence, then in early 1977 he asked me to serve as Advertising Manager for the fledgling Surface Design Journal – which at that point was more newsletter than magazine.

I had no experience in this area, but as he wrote in the first issue from fall 1976: “We are working against a lot of problems because none of those involved with this publication have ever been in the publishing business before, plus the fact that we are all involved full time in our own profession as designers, craftsmen and educators.”

But that didn’t stop us!

(View complete text of  Blumrich’s message in this first ever SDA publication (excerpt at right)  along with message from first SDA President Elsa Sreenivasam by clicking Blumrich-Sreenivasam Message SDJ Vol.1 No.1 1976).

From 1976-79, Don Blake was the very first editor of SDA Journal; Steve was managing editor and publisher. Steve became journal editor for Spring 1979 issue. This issue was printed on newsprint due to a West Coast paper industry strike! The strike ended in time for the fall issue to arrive with a cardstock cover and better paper on the inside.

Fall 1982 brought a new look to SDA Journal: a coated royal blue cover and better quality paper inside, which enhanced photographic reproductions that were still in black & white.

1982 also marked the introduction of the personal computer to SDA record-keeping, with Steve agreeing to keep the membership records. Submissions, letters and photos all arrived by US postal service in those days. Advertising had to be camera-ready. It was a big deal to get an answering machine! During these years all family vacations had to be scheduled around our quarterly Surface Design Journal deadlines, and I’m sure Steve and his family had to do this also. 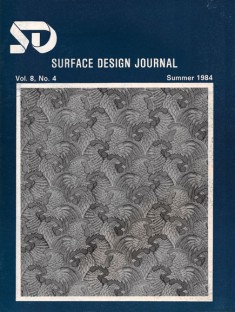 1984 marked another milestone, as the printing of SDA Journal moved to Hong Kong where the first color issue was published.

In 1986, Steve appointed me associate editor, which meant that I did a lot of copy-editing and proofreading as well as lining up articles. I finally joined the computer age – using it mainly for address labels.

In 1988, Steve and I handed over our duties to Charles Talley (SDA Journal editor from 1988-1992) and Joy Stocksdale (former SDA Executive Director). We had worked together for 11 years, shepherding the Journal from newsletter to full color magazine. We attended SDA conferences, presented at board meetings, raised advertising rates, discussed issues of publishing and deadlines, etc.

Steve had many talents and interests – which he shared freely. We developed a close friendship and interest in each other’s families, artistic ventures, trips, interesting textiles and exhibitions, favorite movies and TV shows – including the British sitcom Rising Damp. 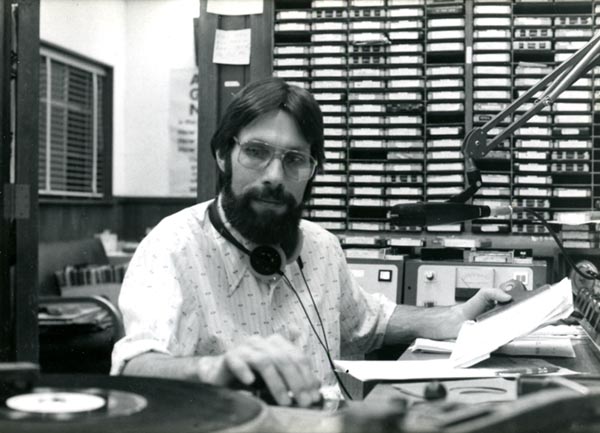 As I look around my house, I see Steve’s batik and silk screen designs, Pea Ridge Purdie quilts made by Steve and his wife Terry, wax-resist patterned Ukrainian eggs (a technique Steve introduced me to that I went on to teach), the still-worn hippari jacket from Kasuri Dyeworks that Steve helped me pick out at SDA’s 1985 conference in Monterey, the row of Surface Design Journals on a basement shelf. (Read his recollections of SDA’s early history on the occasion of its 20th anniversary in 1996 by clicking Blumrich-LookingBack. Read first SDA President Elsa Sreenivasam’s recollections by clicking Sreenivasan-LookingBack). 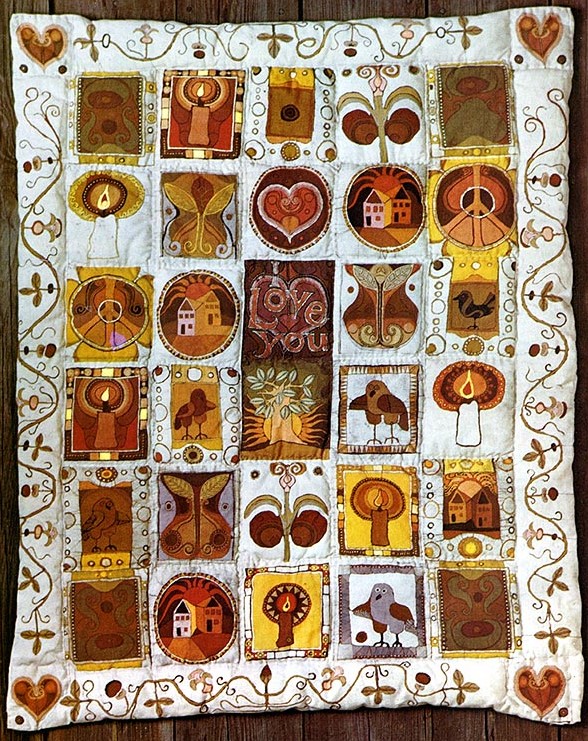 Through his many stories, I learned that Steve grew up in Germany and Austria during World War II, suffered from polio, hid in basements to escape Allied bombings, rode his bike around a former concentration camp having no idea what it was and learned to weave tapestry from a former Bauhaus teacher. 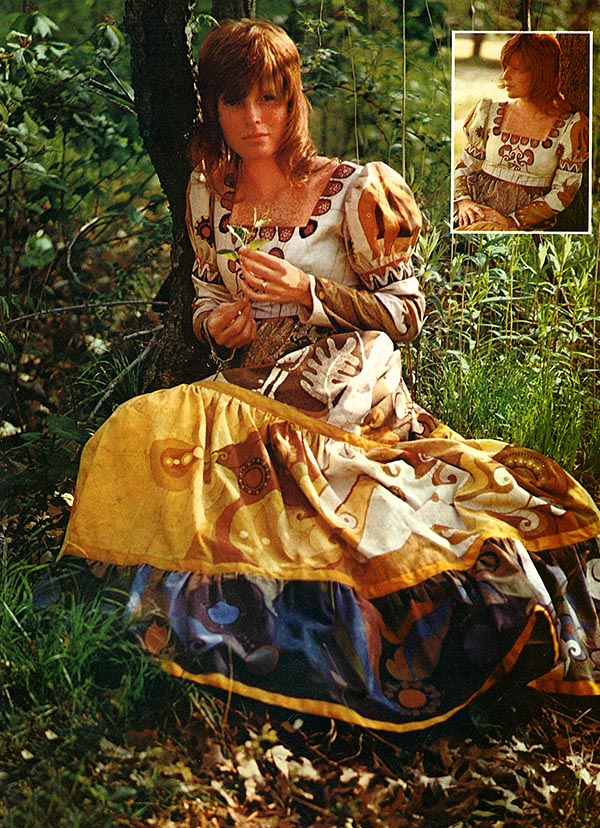 One of the last conversations I had with Steve was in fall 2014 after seeing the Fiber Sculpture, 1960-Present exhibition in Boston that included several artists from the very first Surface Design exhibition in Kansas. It sparked a discussion about what we were going to do with all the SDA ephemeral – like magazines, conference bulletins, etc., we had stockpiled in our houses! 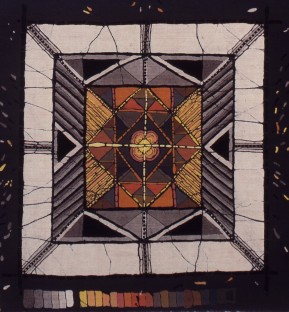 I received this final email from Steve about his early career in New York City:

“Your mentioning the 12-harness Leclerc (loom) brought back some long-lost memories that you don’t know about me.

In 1960-61, I worked for a textile company called Woolmark in NYC. They were [located] at 36th & 8th Avenue. I was a pattern weaver and my boss was a Swedish girl who was the stylist in the 2-person design department. The company had 4 woolen mills in New England that produced woolen fabrics for women’s wear.

When I first got there, I only worked on a 4-harness loom. My job was to quickly weave samples for the salesmen [who handled] special requests from customers. You know how customers are – they always want to see something a bit different so they can take credit for that wonderful design or color combination.

The samples were about 8 x 10″. I had a yarns of every color for the current season. We worked about 9+ months ahead of the actual market. I could crank those samples out in no time at all. Had a handy small warping mill. The 4-harness was a small floor loom; really easy to re-warp.

Nina, the stylist, came up with the idea to mix silk and wool threads woven in different patterns using all-white (natural) wool – and then piece-dyeing it so there is a faint woven design in color on color. The silk always dyed a bit lighter than the wool. We came up with some nice stuff. 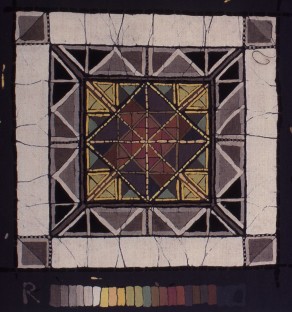 One day they decided to expand their design possibilities and we all drove out to some place in NJ and looked at looms. We ordered a huge 12-harness Leclerc. It was a monster – like the European looms I was used to. Overhead beater with flying shuttle. It filled a third of the room….

Just thought I’d share that with you. Have not thought about my NY days for a long time. Thanks for the memories.”

In March, 2015 (as I write this), I had just begun making a few shibori coffee cup sleeves when my husband asked, “Who are you making those for?”

We both agreed that he would have appreciated them. 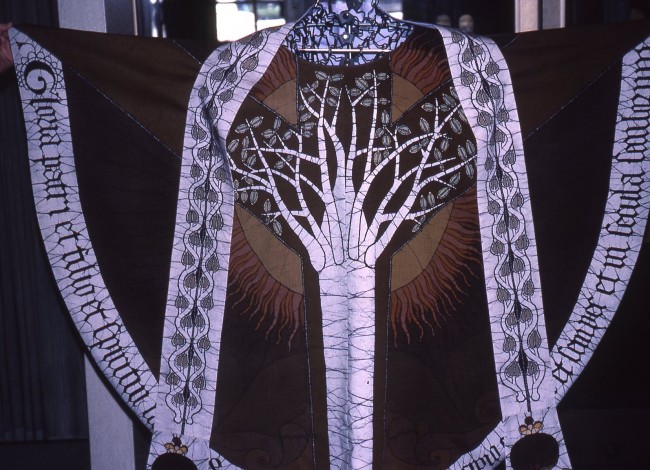 (Thanks to Rebecca Arkenberg, Terry Blumrich, Patricia Malarcher and Astrid Bennett for sending images of Stephen Blumrich’s work and scans of early SDA newsletter/proto-journal covers and messages. Thanks to LM Wood for scanning and manipulating Terry Blumrich’s archival materials for this SDA NewsBlog tribute. – Ed.) 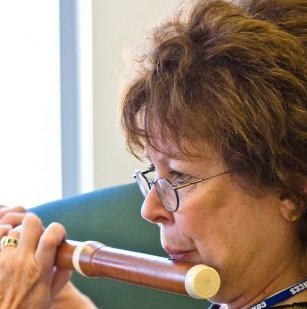 Rebecca Arkenberg moved to Grapevine, Texas, in 1989, shortly after leaving the position as advertising manager for Surface Design Journal. While there, she reconnected with the late Shigeko Spear at University of North Texas and finished her masters’ degree in art education with a museum education minor. She taught 2-D design and worked as a graduate student assistant at North Texas Institute for Educators on the Visual Arts, a Getty Regional Institute for Discipline-Based Art Education.

After graduating in 1997, Arkenberg moved to Stratford, Connecticut and later joined the education staff at Metropolitan Museum of Art in NYC as head of off-site teacher programs. She continues to work there contractually in a variety of programs, gallery talks, teacher staff developments, school tours, access and family programs.  While at the MET, Arkenberg developed teacher staff programs on textiles and was also education representative on the ground-breaking Renaissance Tapestry exhibition. She designed a series of 15 Math & Art workshops and continues to conduct an art and math class for elementary math teachers at Hunter College, where she is adjunct faculty.

Arkenberg has written for a variety of publications, including School Arts, Handwoven, and many of the MET’s teacher packets and family guides. She is currently researching a weaver who lived in Stratford in the late 18th – early 19th c. and teaching workshops on charted boundweave.