The Mushroom Color Atlas launched this past October as an online resource and reference for the stunning and wide range of colors that can be derived from mushrooms. Lauren Sinner, SDA Managing Editor, interviewed Julie Beeler, the creator of the project about her inspiration, process, and plans for the future. 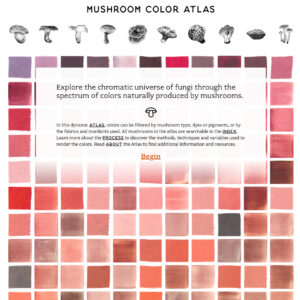 What prompted you to create the Mushroom Color Atlas?

I wanted to create the Mushroom Color Atlas as an online resource and reference for everyone curious about mushrooms and the beautiful and subtle colors derived from them. In the workshops I taught, students would create a mushroom color chart and there was a lot of interest and curiosity on Instagram which made me realize there was a huge community that could benefit from making the Atlas. It is the start of a journey and a point of departure, introducing everyone to the kaleidoscopic fungi kingdom and our connection to it. My hope is that through this Atlas everyone will be inspired to learn more about the mycological world, and begin to understand the importance of the networks, connections and symbiotic relationships that live in our forests. Most importantly, understanding our impact on these delicate networks and our role as stewards of the land, bringing positive change to our local environments and our planet. 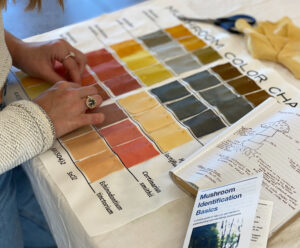 I really love the contrast of the black and white mushroom illustrations at the top with the color palette below. Can you talk about that aesthetic decision?

Thinking about the overall design of the Atlas it was important that the colors derived from the mushrooms be the central focus. Of course the mushrooms needed to be highlighted and I spent a lot of time thinking about using photography or illustrations either in color or black & white. Brad Johnson, who did the visual design, started taking elements from my color tests, photographs and illustrations and juxtaposing them together. The world of mushroom photography is absolutely beautiful but it would make the mushrooms the star of the Atlas, not the chromatic universe of colors derived from the fungi kingdom. It also tended to be a bit misleading because the colors of the mushrooms don’t necessarily represent the colors derived from them and it blurred the line of the Atlas becoming a field guide for mushroom identification. I connected with Yuli Gates after seeing her illustrations and it was the perfect partnership. As I began uploading the illustrations into the database one evening I was thumbing through Miriam Rice’s mushroom dye books which were illustrated by Dorothy Beebe and realized I was following a long tradition of using black and white dye mushroom illustrations. 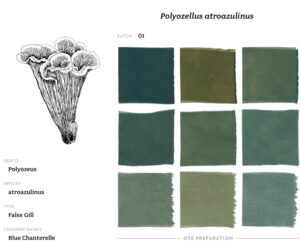 When you were creating the samples, did anything unexpected happen? Like an oxidation occurring during the laking process?

The exciting thing about working with mushroom dyes is that something unexpected always happens. For all the mushroom dye baths I created I made ‘lakes’ to capture the pigment and transform it into watercolor paint. One day I walked into the studio, I noticed a strange smell and followed my nose to the area where I was storing the dyes. One of the dyes, Boletus mirabilis, had literally exploded into this murky, gooey mess. I was perplexed. I had strained all the mushrooms out of the bath so how had all this mushroom mass gotten in? I recall it was a clear dye bath that I had strained off multiple times but over the course of a couple days it had materialized this big massive growth of goopy mushroom muck. It had such force it had popped the air tight lid off my mason jar. I thought for sure I had done something wrong so I repeated the process all over and was methodical to make sure I didn’t make any errors in the process. I went to make the lake that evening and it was already growing, not to the extent of the first one but it was on its way. I learned that B. mirabilis, although a great dyer, is almost impossible to extract pigment from. 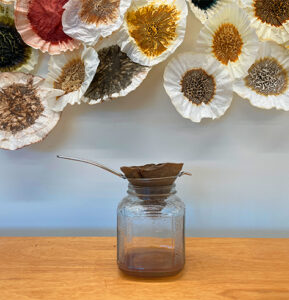 It seems that a lot of the mushrooms featured are Pacific Northwest-based, do you have plans to travel to other areas of the US (and internationally) to continue to expand the atlas?

I foraged almost all of the dye mushrooms myself that are currently in the Atlas, with the exception of a few, in my local area in the Pacific Northwest. I have plans to travel to different locations around the world to explore a variety of forests and conduct color studies. I have a traveling dye kit which I will bring with me in January when I go foraging in the San Francisco bay area. The resulting colors I gather from these locations will be informed by a myriad of factors that influence, inform and change their chromatic outcome and connect us more deeply to those places. 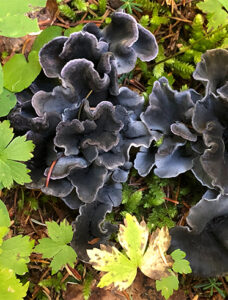 What are your plans moving forward for the Mushroom Color Atlas?

I already have 5 new mushroom color studies to add to the Atlas and my wide-ranging forages will extend and evolve the Atlas over time. My goal is to connect with other mushroom dyers, mycophiles, mycologists and scientists, known as Mycopeeps in the Atlas, in different parts of the country and world to join on the journey and contribute their knowledge. Over time I hope to have a community based component allowing other mushroom dyers to contribute their color studies. I intend to expand the type of studies to include various techniques like over dyeing, manipulation of pH and others, and my plan is ultimately to create a map of the atlas directly connecting the color studies to the place in which they came from so we can better understand the forests, habitats and environments critical to the fungi kingdom. 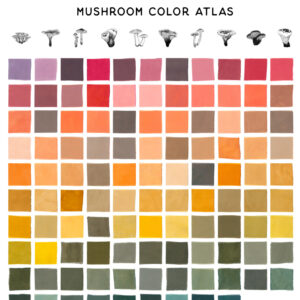 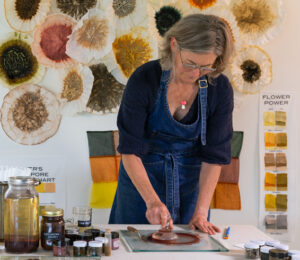