Lee Zimmerman Gets High (On Silk) 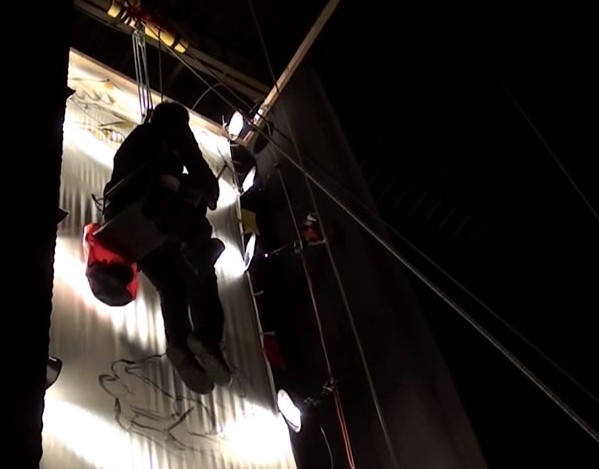 I am floating 30 feet above the concrete floor in the dark.

I can hear the murmuring of the audience as I strap the paintbrush onto a three foot long piece of bamboo.

The lights switch on, illuminating a tower of white silk.

As as the luscious notes of a solo cello begin to resonate through the auditorium, I begin to paint. 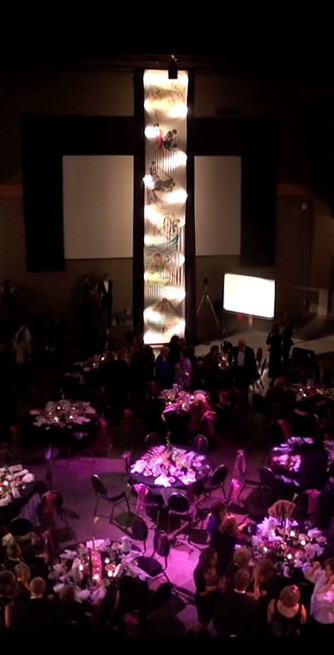 The audience cannot see me but they can see the dyes appear as they flow from my brush through the silk fibers. In about an hour, the entire thirty foot tower will look like a stained glass window filled with images of hope.

I am a silk painter–but I am becoming more of a performance artist. In the past, I have done numerous large-scale live painting performances. I have worked with orchestras, jazz bands, dance companies, circus acts, poets, flamenco artists, and in theater works.

Classical silk painting is done by drawing in pattern lines using gutta and then filling those patterns with dye. Gutta is a rubbery resist that can be used to create boundary lines on silk fabric. The dyes that normally would flow through the silk are stopped at the boundary created by the gutta. This gives the artist control over positioning the dyes on the fabric, allowing them to create images.

I paint in a different way. I sketch in part of the image using black dye, making an effort to touch much of the surface with a thin dry-brushed layer of black. When I add color dyes, the thirst of the fibers and gravity pull their moisture in a given direction. As it is pulled into the silk fibers, the colored dye will pick up the black dye, carry it, and form very sharp black lines at its boundary when it stops. I have learned to form my images from these black edges. In essence, my painting is often more akin to a controlled spill. Because I am using gravity and the flow of the dyes in the silk fibers, I can cover large areas of silk with great speed.  This speed has allowed me to take on challenging subjects not often attempted by silk painters.

The 30 foot tower of silk was an interesting artistic puzzle as well as a technical one. The painting was being created as part of a 30 year celebration/fundraiser (October 2010) for the Domestic Abuse Intervention Program (DAIP). From the beginning, I knew that the final silk panel was to be cut into 6 sections, each of which would be quilted by Karen McTavish, a well-known single piece quilter, and then auctioned to support the work of the DAIP. Because the subject of domestic abuse is so complex and terrible, I needed to create images that maintained a link to the subject but that communicated the hopeful side of the issue. Bottom line: I needed to create a single tall image that could be cut into sections, each being a complete painting itself that communicated hope and help for domestic abuse situations.

My solution was to create 6 themes with each theme depicting some aspect of domestic abuse or hope and survival. I began at the very top of the tower, painting two falling people. About halfway through the performance, I changed these falling people into golden angels. At the very bottom of the tower, I painted a man looking into the water. In his reflection he sees a minotaur. Throughout the performance I was moved up and down the the tower silently using ropes. You can see a sketch of the final painting and discussion of all of the themes at duluthartists.org/quilt1.html

Watch the video below (from a different performance) to hear about and see my process in action in an interview for local broadcast on The Playlist, WDSE.

Find out more about the DAIP performance and others at duluthartists.org/zimmerman.html
Follow Lee Zimmerman on Twitter @zim2918
http://twitter.com/#!/zim2918
Check out the SPIN–the international organization of silk painters–
at silkpainters.org/