Link About This: Latest Web Picks from Mickie 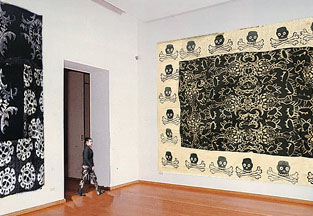 The first link above takes you to the current exhibitions at the San Jose Museum of Quilts and Textiles, where Earthly Paradise: Memory, Myth, Metaphor, an exhibition featuring large-scale work by A Bee, is currently at the top of the list.

A Bee is actually the dynamic duo of Carrie Houseman & Darka Novoselic–who are SDA members.

Because you can’t really get a sense of the immense scale of their pieces from the one illustrated on the museum site, the second link is to the A Bee website, where you can see another installation shot at the end of their gallery of fantastic images. They describe their work as “21st century fairy tales to be suspended from girders, i-beams and trusses.” 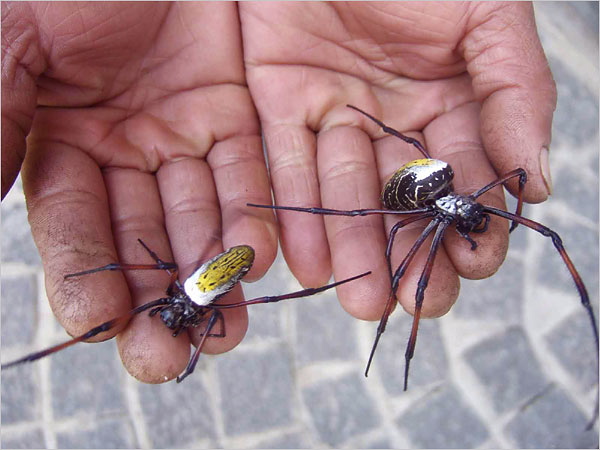 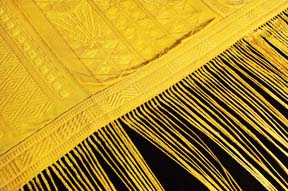 Simon Peers, a British art historian/textile expert, and Nicholas Godley, an American fashion designer, are the subjects of this article in Fast Company magazine from October 2009. The blog post has a link to a 3-minute video about a truly incredible textile woven from spider silk–specifically the silk of more than a million Golden Orb spiders in Madagascar. It was on display at the American Museum of Natural History (NYC) in 2009 and was covered by Threads magazine, ScienceNews Web edition and even the Martha Stewart show, but somehow I missed them and thought some of you might have as well. The color of the garment is the natural gold of the spider silk (and I was also pleased to read in the New York Times that the welfare of the spiders was taken into consideration).

A recent posting on the NPR website includes another video featuring Nicholas Godley and showing interesting details about the Golden Orb spiders (and then going on to talk about how scientists are doing creepy transgenic experiments to produce super-strong fibers).

For more press coverage, check out the Simon Peers/Nicholas Godley website at www.godleypeers.com

Twisted Thread is the website of Creative Exhibitions, a company that puts on several major textile events for the public in the UK.  Most notably amoung them is the Festival of Quilts, which they describe as the leading quilt show in Europe. It is organized with the support of the Quilters Guild of the British Isles and will take place in August 11 – 14, 2011, in Birmingham.

Creative Exhibitions also do the Knitting and Stitching Show in October in London. Both shows have links on the home page, but I would especially like to direct your attention to their Film Theatre in the menu at the upper left. They have more than 20 videos there, divided roughly into quilt- or stitching-oriented. A few of them are short “previews” for DVDs that they sell, but many are demonstrations of various techniques or artists’ accounts of the thinking behind their work. 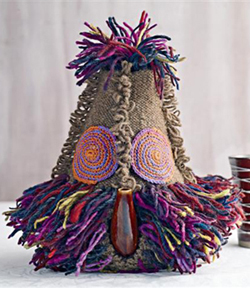 FIBER DOWN UNDER:
The Australian Forum for Textiles Arts
www.tafta.org.au

The web site for TAFTA, the Australian Forum for Textile Arts, has several items of interest. From the home page, click on the FORUMS link to check out the conference to be held next fall. Be sure to go down the list of teachers–each of which has a link to terrific photos of their work.

TAFTA also has a magazine, the Textile Fibre Forum. Follow this link to issue #96 from 2009, then go down to the bottom for Wendy Golden’s article on shoes (each of the three pages is a separate PDF). For more on the maker of shoes at right, check out thereseflynnclarke.blogspot.com 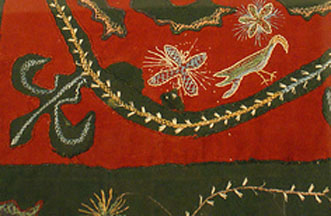 This is a beautiful web site!  Needleprint: Opening Up the World of Needlework for You has links to all sorts of wonderful things.  The link above goes to an older post that features the show Inlaid Patchwork that was at the Austrian Folk Art Museum in 2009-10. This technique – cloth intarsia or cloth mosaics – is quite different from intarsia as a knitting technique. It is described as “special forms of inlaid patchwork employing fulled, non-fraying wool offcuts abutted (not seamed) which are joined by almost invisible, tiny stitches on the reverse.”

There are several examples here and you can see another piece from that show–from the 17th century with lots of close-ups–here: embroidery.racaire.at

Be sure to click back to the home page to see the latest features on this lovely site.

__________________
Mickie McCormic is a fiber artist specializing in image transfer who has been involved with SDA for over ten years. She lives in southern Oregon and teaches workshops there and at the Mendocino Arts Center (CA).