In October 2020, I was contacted by Diana Akiyama, the first Japanese-American woman elected a bishop in the Episcopal Church, to create her vestments. Diana has a deep reverence for the natural world which she wanted reflected in her vestments. She knew nothing about katazome except that it was a traditional Japanese technique and she thought based on what she had seen on my website that it could be used to produce the imagery she wanted. 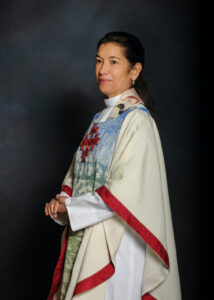 We arranged to meet in my studio so I could show her some finished garments and explain more about katazome technique. A set of vestments consists of a cope (floor length cape), plus a chasuble (poncho like garment worn during the serving of Holy Eucharist), a stole (worn around the neck in front) and one for the deacon who assists her (worn diagonally from one shoulder), plus the bishops mitre (the pointed headgear). I showed her my silk fabrics and she chose a broadcloth for its fluid drape, stability and matte surface. We met every two weeks or so to consult. Diana is an accomplished dressmaker and had a very clear vision of what she wanted and we worked well together.

I had white Japanese kimono silk which we chose for the center panel of the chasuble, to be dyed with traditional Japanese patterns, including stencil borders representing her family crests and the rose from the Diocese shield. The curved hem would be finished with a red silk facing turned to the front and the cross on the front would be appliqued from the same silk. She wanted a soft green grading to blue. 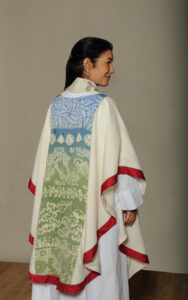 We decided to make her priest’s stole with a collection of my small stencils reflecting the natural history she loves. The deacon’s stole would be compatible with the chasuble in color and design. 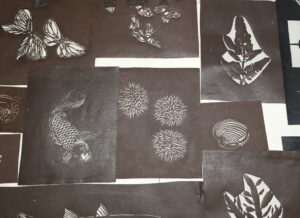 Auditioning stencils for the Bishop’s stole. 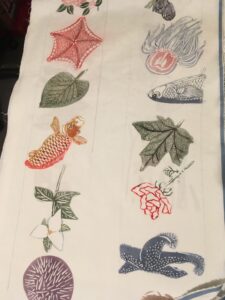 Finished fabric for the Bishop’s stole. 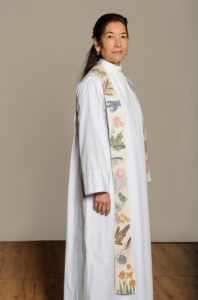 This was a challenge technically because there were no patterns for the style she wanted. Fortunately for me she had been given a mitre from a former bishop and I could take it apart enough to figure out how to construct it. For the top and the lappets that hang down in the back I designed stencils based on an image from a temple gate I saw in Kyoto. It was dyed with the same cool red, and the lining and interior skull cap were matching cotton. It was assembled almost completely by hand, with a stiffened interior support of two layers of fused heavy pellon. 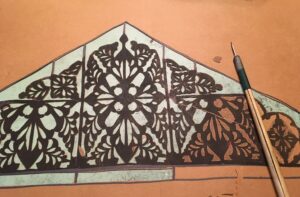 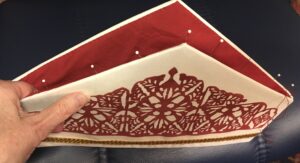 This was the big challenge and the part that took almost two and a half months to complete. The garment is a gigantic half circle, bigger than the 4 x 8 foot work table. It required 7 yards of silk for both front and lining and there were six wedge shaped pattern pieces, so lots of bias seams. What she envisioned was a swirl of water starting with a pool at the lower left and rising to end on the right shoulder. Japanese stencils are rectangular and designed to repeat along a length of 14” wide kimono fabric. I spent time working out a design and figuring out how to make a trapezoidal stencil that when pasted would give me that big curve. I also designed stencils for the beginning and ending of the curve and figured out how to join them gracefully to the main stencil shape. 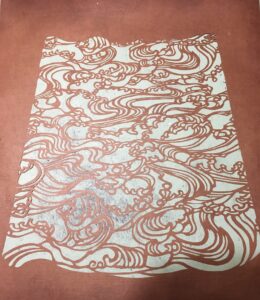 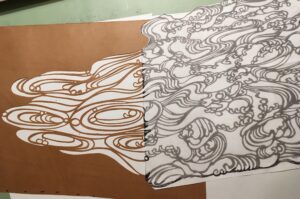 Applying the paste and matching the joins across the six separate pieces was the most challenging part of the project for me. Stretching the panels like hammocks I applied the green and blue soy milk-based pigment dyes, let them cure and washed off the paste. I sewed it together and corrected any dye mismatches at the seams. I constructed the garment with the support of a local bridal seamstress, Linda Brown. I added lines of Japanese gold threads couched on the wave and delicate beading in blues and greens to catch the light. I attached the red kimono style bands to the front opening and a gilt morse (clasp) to fasten it in front and it was complete. 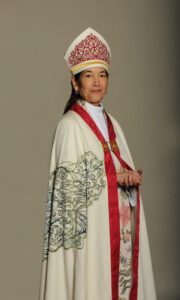 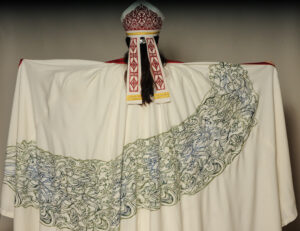 I do not mind admitting this was one of the most challenging projects I have ever undertaken but also one of the most rewarding. Most of it was not difficult katazome, but the cope was a huge undertaking and asked more of katazome technique than I thought possible. Bishop Akiyama was installed January 3I, 2021 in Portland, Oregon. I am proud of what she and I accomplished working together and thrilled that she and those who have seen it are happy with the results.