In Review: “A Line Can Go Anywhere” by Lina Moe

This fall, James Cohan gallery in New York featured an exhibition of Northern California fiber artists under the enigmatic title, A Line Can Go Anywhere. The group show is curated by Jenelle Porter, who organized the 2015 survey, Fiber: Sculpture 1960-present, which traced, in Anni Albers’ phrase, “the language of thread” through the efflorescence in the second half of the twentieth century of new techniques, materials, and political interventions. Its seven artists span from the mid twentieth-century to the contemporary moment and make work that represents a similar range of artistic practices, structure, and aesthetics as were on view in Porter’s landmark sculpture survey. 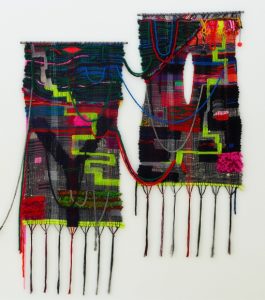 The title of Porter’s new show, A Line Can Go Anywhere, most obviously refers to the intergenerational influence that connects the seven artists, who represent at least three generations. Inflections of the Bauhaus-trained Trude Guermonprez appear in the work of her students Alexandra Jacopetti Hart and Key Sekimachi, and Ed Rossbach’s basketry and spidery abstraction feel meaningful to the brightly-colored panels of Terri Friedman and the ornamented assemblages by Josh Faught. Ruth Laskey’s 2016 Twill Series hews closely to Guermonprez’s prioritization of technique and attention to weaving structure. Geographically speaking, “anywhere” in this exhibit is the Bay Area, a limitation of focus that sits uncomfortably next to the expansive suggestion of the exhibit’s title, but nevertheless provides a rich cast of fiber artists to showcase. Ben Van Meter’s film, “The Saga of Macrame Park” (1974), further anchors the show in Northern California, where the practice of fiber arts seems knotted and tangled with the political ambitions and imagination of a very specific place.

The realization of the show’s moniker is most compellingly achieved through the interaction of the fifteen pieces and the way their distribution through the gallery’s two rooms vivifies how A Line Can Go Anywhere. The textiles and three-dimensional fiber pieces move away from the wall. Guermonprez’s double-weave Space Hanging, in which the two layers of warp are rotated perpendicularly to each other, and Sekimachi’s Naggare III, a delicate vertical cocoon of dark filaments, draw attention to the droopy elongation of Friedman’s Never Odd or Even. Faught’s free standing screen and Rossbach’s basketry reminds us of the subtle dimensionality even of seemingly flat wall hangings. Hart’s intricate yet inviting Nebulae is a kind of double weaving: wide bands of plain weave overlap each other and then, moving away from the edges, gradually divide into narrower strips, so that the center of the multi-layered hanging is a thick checkerboard of increasingly tiny, yet regimented squares. Or, standing slightly to one side, a visitor can make out the camouflaged text that juts out from the densely-woven background of Guermonprez’s Notes to John I and II. 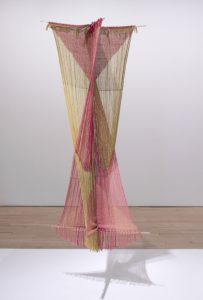 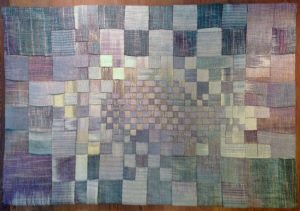 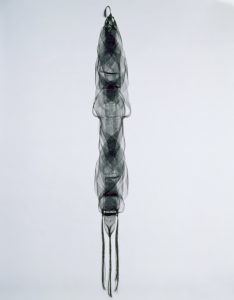 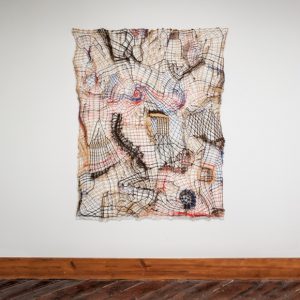 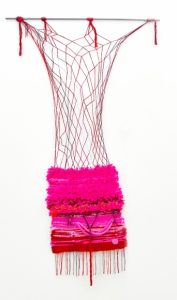 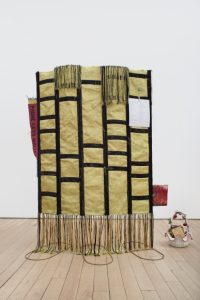 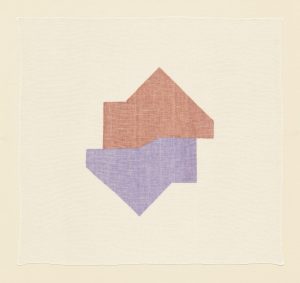 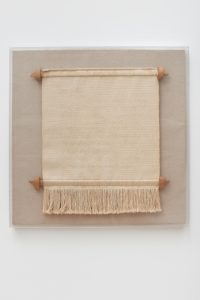 The woven line does indeed go anywhere. In this case, it penetrates the often empty middle space of the gallery. Textiles are so often folded away, hung flat, or compressed into two dimensions. The art in this show draws visitors in close to examine complex weaves and unexpected materials, but it also moves out, away from the wall, to meet the visitor who is asked to question again where fiber art might go next.

Lina Moe received her PhD from Yale University in 2015 and is currently curating a show titled Text and Textiles for the Beinecke Library, which will go on view in April 2018.