“Scanning the Field” by Robert Mertens

In light of the conclusion of our biennial conference in Portland, OR, artist, educator, and SDA member Robert Mertens reflects on his experiences, thoughts, and conversations while attending Making our Mark: SDA at 40.

“The site of art begins to diverge from the literal space of art, and the physical conditions of a specific location recedes as the primary element in the conception of a site.”
– Miwon Kwon, One Place after Another

After attending SDA’s conference Making Our Mark: SDA at 40 in Portland, Oregon, I found myself pleasantly bothered. A festering need arose to dig through my notes from grad school and particularly notes from Kwon’s book “One Place after Another”. Within the conference I was expecting to see a lot of “Immaculate Craft”—a term from Sloppy Craft, which concerns the language of the type of hand work that defies understanding of creation by myself and other artists. I see it often when looking at the work produced from OCAC or Penland. The artists’ hand has completely disappeared, though the immaculate techniques in handweaving, hand quilting, etc. 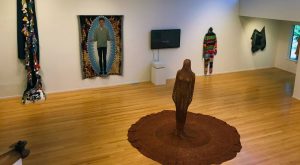 I did see such immaculate works of art at this conference and I also saw works often fitting into ideas around “Sloppy Craft” also very much expected considering Josh Faught was one of the Keynote speakers. What I didn’t expect to see were works that I consider immaterial fiber arts that center on ephemerality. 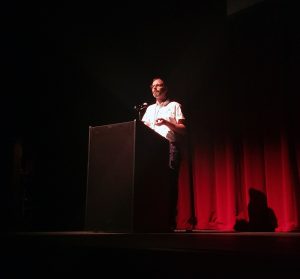 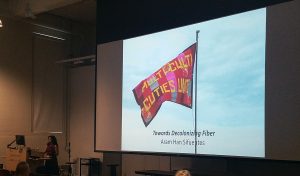 Conversing the “how” rather than “why” was a driving theme in Excavated Pattern: Digitally Cut Vinyl to Interpret Indian Block Printed Textiles Found in Egypt by Wendy Weiss. Within her practice Weiss questions herself in the development of the research, as well as what new enquiries have arisen. Weiss provided some brief statements on where she’s discovered fragments of ancient textiles online, and how she was utilizing these patterns and translating them into a digital language that a vinyl cutter can process into stencils. Those stencils were then applied to the interior windows of the OCAC building.

The scale of Weiss’ stencils was restricted by mechanics as well as the aesthetics of the windowed hall where they were located. This caused the stencils to fall firmly within traditional and theoretical conditions of Installation Art. Yet, these pieces contained aesthetic power beyond the limitations of physical site specificity. Natural light as well as the audience’s position of viewing shifted the composition of the work. The vinyl was applied directly onto the glass; therefore, it was framed by the pastoral Oregon countryside behind it. The elements of her techniques are not groundbreaking, and fall squarely within Krauss’s “Sculpture in the Expanded Field” as landscape and architecture, however due to the artists training in fibers there is something else happening with the piece. Weiss’ works, as well as others, such as Surabhi Ghosh, are anchored to the unexpected materiality of vinyl, which is generally used in painting, printmaking, and sculpture, rather than in Fibers Arts circles.

Weiss’s inclusion of digital processes and archives generates ephemerality within the work. This work falls within the compression of a thousand years of technological progression, and exists within a liminal space of historicity. It is neither of ancient Indian, nor is it Contemporary American–yet is both.

In discussion with friend and fellow conference attendee Alison Gates, a fiber artist and educator, we discussed an undercurrent of artists doing similar work. Weiss’ work is different in that she firmly situates herself within Fiber Arts. How does that context influence the meaning of the works of art? Familiarity of the material of Fibers Arts is evident in nearly every person on the planet–clothes for example, provide an immediate familiarity. This relationship is inescapable, and fibers metaphors even filter into our quotidian language. Yet how many people or artists have a deep knowledge of Fiber Arts? This awareness of historical intersectionality, ubiquitous patterns, or most importantly kinesthetic comprehension of textiles provides critical depth to the work and more potential levels of meaning. This understanding only comes with years of craft training and hands-on scholarly research.

A lovely reminder of why Fiber Art is a relevant field in the arts and an excellent example of the diverse practices within the medium.

Robert Mertens is an amateur historian, internet theorist, and film fanatic. He is the director of the Fiber Art Department and an assistant faculty member at James Madison University, and co-owner of Toothmark Studios. His work revolves around the intersections between technology, religion, science and myth.