We have quite an exciting lineup of books to be featured this year in SDA’s Book Club! Our first addition for 2021 is A Perfect Red: Empire, Espionage, and the Quest for the Color of Desire by Amy Butler Greenfield, reviewed by Vivien Zepf. 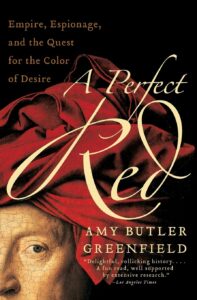 A Perfect Red: Empire, Espionage, and the Quest for the Color of Desire

Mary, Queen of Scots walked to her death wearing garments suggestive of a nun, a symbol of the Catholic faith she had hoped to restore in England. But at the steps of the executioner’s block, she threw off her black robes to reveal a different ensemble, with a dark red velvet petticoat and dark red satin bodice. Without saying a word, she spoke of royal blood, courage and martyrdom. The color red did all the talking.

The language and symbolism of the color red, within the context of Western culture, are just two elements of Amy Butler Greenfield’s book, A Perfect Red: Empire, Espionage, and the Quest for the Color of Desire. In this expansively researched book, Greenfield offers us a profile of cochineal red dye, leading us through a wide range of interlacing topics from alchemy and scientific inquiry to colonialism and independence, trade routes and piracy. We learn about the Aztecs who domesticated the cochineal insect which feeds on nopals (also known as prickly pear cactus) and from which the Aztecs painstakingly produced the most brilliant, water-fast red dye the world had ever seen. Kept a closely guarded secret–like most dyeing techniques had been–the debate about how the color was produced was fraught with mythology, assumptions, and biblical interpretations. Even the Spaniards who conquered the Aztecs and controlled Oaxaca in New Spain (a.k.a. Mexico and its primary cochineal production region) didn’t fully comprehend the process for successful cochineal cultivation and production. But the world was starved for the color red and the royal, elite and wealthy classes were set on making the color their own, at almost any cost.

Greenfield’s book offers European and New World perspectives on relevant events from the Middle Ages onward. It’s a lot of ground to cover, but the many larger-than-life personalities of this narrative keep the text engaging. I needed to sketch a timeline to track all the intertwining histories, but that’s on me rather than any fault of the author’s. Some readers might find the segments on royal treasuries and embargoes a bit tedious, but they are critical to understanding the impressive impact the cochineal export market had on trade and finances. I found the biology, nature and science experiments surrounding the cochineal particularly interesting but then, I’m a science lover. I encourage you to read an edition with color illustrations, though there are only a few, and I hope they are included within the body of the text rather than presented at the very end, as they were in mine.

A Perfect Red is the fascinating saga of the color red, complete with origin story and turmoil across the centuries. I recommend the book for anyone interested in the history and cultural impact of textiles. Similar to Mark Kurlansky’s Salt, Greenfield enlivens the story of a global commodity and, for my part, it has deepened my respect for the ancient civilization which had this all figured out so long ago.

—Vivien Zepf is a quilter, photographer, and art museum docent from New York.  She is a member of SDA, SAQA, and the Katonah Museum Artists’ Association. vivienzepf.com