The Pocket: A Hidden History of Women’s Lives by Barbara Burman & Ariane Fennetaux 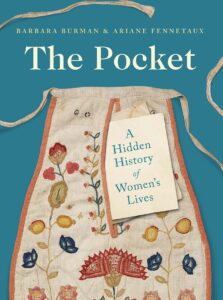 I finished this book while having to pack a carry-on bag for a weekend away, and wished I had the sartorial accessories of pockets, as discussed in this book. They would have been very handy for holding my book, headphones, knitting supplies, a few cough drops and a compact shawl. I would have no need for an extra bag to check, but would probably be uncomfortable as a wearable (for me or my neighbor) in a narrow airplane seat. In The Pocket there is as much attention given to the contents as to the structures, since it is the contents that substantially give information about their wearers—about class and position in society, occupations and labors, and degrees of agency or freedom in their daily activities. Pockets that are internal to men’s garments were discussed only in comparison to their capacity to carry necessities.

The deep dive into a very particular part of clothing, as the lens through which to view, still offers a limited view of “women’s lives” as it exclusively covers England, mostly the urban lives, and has two centuries of time between 1700 and the late nineteenth century. That said, the authors have done an amazing study of those pockets of Ladies, which were preserved through inheritance (one of the few items a woman could own and pass down)and accidental storage, and those pockets that came into “The Old Bailey” through arrest of their owners or as reported stolen. When stolen, it was not the pocket, but their contents that were of most concern. Interestingly, the owner could often be identified because dates and initials were part of their embroidered embellishment. And embellished they were, even though they also often resided beneath an out layer of skirts, unseen and accessible only through side slits.

While their design hardly changed over 200 years, as British women’s public lives progressed fashion leapt forward, and the use of tie-on pockets fell away. This scholarly work on exclusively these female associated objects adds in a surprising way to the knowledge and interest many have in the material world as seen through everyday objects of a specific period.