One of the flock out in the pasture.

This month, we have a bonus addition to the SDA Book Club! A few months ago, Vivien Zepf visted Catskill Merino, the farm from which Clara Parkes received her wool for “Vanishing Fleece,” to learn more about the history, process, and lambs. Check out more in this bonus book review / travelogue below! 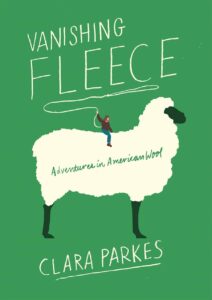 The conversation started at 4:30am. I couldn’t sleep so I sent out an email. “May I please stop by for a visit?” The reply came within minutes. Dominique, owner and shepherdess of Catskill Merino, was already up and working. The answer was yes. “Clara Parkes is important to this farm and the sheep of the world. In general, due to my workload, I don’t have visitors but you can come :)” 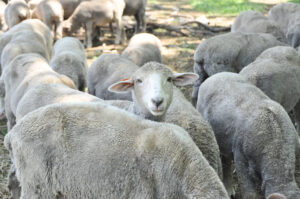 One of the flock out in the pasture. Photo: Vivien Zepf.

I had reached out to Dominique while I was reading Clara Parkes’ “Vanishing Fleece” to review. In her book, Parkes regularly refers to the “Great White Bale” of wool she got from Eugene Wyatt, then proprietor of Catskill Merino. She agreed to buy it from him because she realized she didn’t know the answer to the question, How do you commercially make yarn in America? As a yarn critic, Parkes is an expert on yarn and its properties, but didn’t really know the steps necessary to produce good yarn. She decided she’d use the bale of scoured, superfine merino wool from Eugene’s flock to find out how and ,in the process, complete her self-anointed curriculum for a Masters in Yarn-Making.

To do justice in my review, I felt I had to see the farm where it all started. (Confession: I’m not a knitter so felt I needed to do a bit of homework. And, okay, maybe there was a little bit of self-interest involved, too. Who doesn’t want to visit a sheep farm?) On the prescribed day, I started off on highways and ended up on country roads where barns and silos outnumber garages.

Dominique met me in front of the barn. I could hear strains of classical music and see the twinkle of fairy lights inside. She said, “I thought it would be nice for the lambs during this stressful week and I always appreciate the atmosphere it brings to the barn.” The lambs had been weaned only a week earlier so she worried they might be skittish. We tiptoed in and I was immediately charmed. 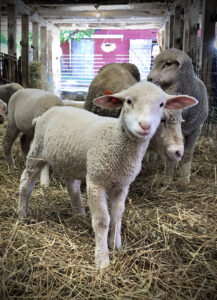 The barn was cool even on the hot summer day, with breezes crisscrossing between the open windows. We spent about an hour inside, chatting and being nibbled by lambs who greeted me like playful puppies. Being a sheep producer (a term many ranchers prefer to “farmer” states Parkes) means you have to be a bit obsessed with the creatures. Lean, with a ready smile and strong hands, it’s not hard to see that Dominique loves her work and is good at it. She coos and the lambs crowd around; she sings and the yearlings run up the lane to greet her. A favorite ram named Winged Victory, whose horns splay out like unfurled angel wings, bleats when he sees Dominique across the field. 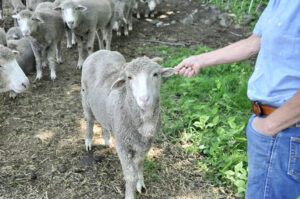 Out in the fields, a young Saxon Merino wether (a castrated ram) gets an ear rub from Dominique. Photo: Vivien Zepf.

Dominique manages her flock of approximately 260 sheep primarily alone, getting help only when it’s absolutely necessary, such as for shearing and hoof clipping. Eugene, whose spirit inhabits every part of Parkes’ book, left his sheep and farm to Dominique upon his death, knowing that she would continue to tend the flock according to his exacting standards. During my visit Dominique spoke frequently of Eugene, his Renaissance spirit, and how his passion for Saxon Merinos drew her away from organic farming to life as a shepherdess. 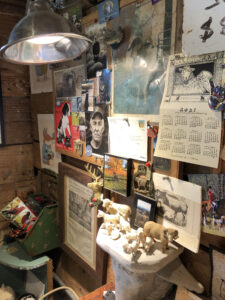 Francesco Mastalia’s black and white portrait of Eugene is centered on one wall of the shepherd’s room. Photo: Vivien Zepf.

As is the case for most of the people encountered in Parkes’ book, this life requires a lot of hard work and dedication. Most of the people Parkes worked with, who transformed her bale of wool into skeins of yarn, were relatively small business owners. Some have gone out of business in the subsequent eight years since working together. Others have branched off into ventures that were initially side business. And that leads me to one of the very few, minor disappointments with Parkes’ book; there’s no addendum, new edition, or links in an e-book, to update readers on the people in the book. Because, really, this is also a book about generosity of spirit. So many people contributed their time to help Parkes’ project a success, each one with their own compelling story of how they got into their relatively niche portions of the wool business. Parkes wrote that the book is “… a portrait of an extraordinary slice of American life. It’s a tribute to the skill energy, sacrifice and optimism of the few people who are still moving forward a domestic industry that globalization has done its best to destroy…The story belongs as much to America’s sheep ranchers and shearers and textile workers as it does me.” 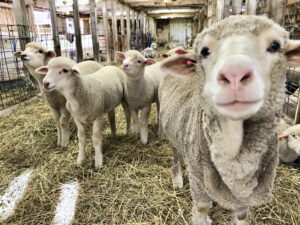 A few older ewes who did not lamb that season stay in the barn with the weaned lambs to provide a bit of comfort. This “nanny” decided I was safe and the lambs came close based on her approval. Photo: Vivien Zepf.

The market has changed a little bit since 2013 when Parkes followed her bale of wool from shearing to production. For example, she retells her experience of attending the American Sheep Industry Association’s (ASI) conference and being dismayed by the lack of responsiveness to the many challenges faced by American producers, particularly in the face of lower demand for wool and for the smaller operations trying to survive. To see how things might have changed, I read the June 2021 issue of Sheep Industry News, the ASI’s monthly newsletter. While small operations received little notice when Parkes was at the conference, this issue had an article about a family making a go of it while homeschooling their children and including them in the daily business of the farm. So maybe there’s hope. But still, Dominique’s has to be creative and cost savvy. To that end, Dominique hand dyes all her yarn in her home studio. She’s also thinking about innovative ways to use the sheared wool. Yet despite the fabulous quality of the yarn, Dominique still has to rely on the meat market to subsidize her wool trade. It’s a hard reality but hopefully that can change. 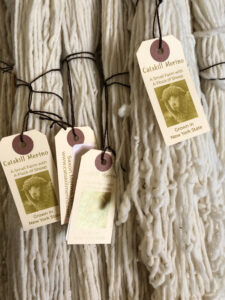 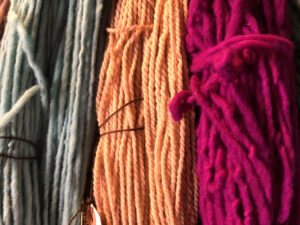 Parkes has wonderful, visual language, but I was jealous of all the Armchair Travelers and Explorers who contributed funding and who followed along in real time as Parkes posted about her adventures in a private online forum. They saw pictures of her exploits, the people, and some of the mechanics involved in the process. And that’s my only other small disappointment with “Vanishing Fleece.” Unfortunately, there aren’t any pictures in the book and I wish I could have seen it all too. But that said, I had so much fun reading the book and I encourage everyone – knitter or not, to read it and benefit from Parkes’ journey and her self-deprecating humor. Really, I didn’t have much of a clue about wool when I started and now I’m a big fan. And, I am grateful that, through this book, I was introduced to Catskill Merino and an intrepid shepherdess. 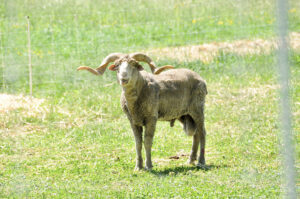 The ram, Winged Victory, calling to Dominique from the fields. Photo: Vivien Zepf.

—Vivien Zepf is a quilter, photographer, and art museum docent from New York. She is a member of SDA, SAQA, and the Katonah Museum Artists’ Association. vivienzepf.com