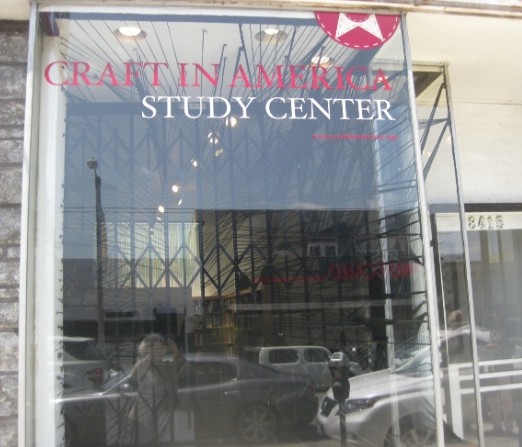 A stunning display of handblown glass in the Freehand Gallery’s window might be what prompts you to stop at 8413 Third Street in Los Angeles.

But take a couple of steps to the left and under the same roof you’ll find the Craft in America Study Center, described by its director Emily Zaiden as “a museum on a very small scale.” Both the 3-year-old center and the gallery, which opened in 1980, were established by Carol Sauvion, a former studio potter and teacher whose passion is sharing her love for American craft. She is the producer of the PBS series Craft in America.

The not-for-profit study center is a permanent base for contemporary craft that offers a research library, lectures, demonstrations, exhibitions and other public programs.

When I wandered into the center last June, Zaiden and a team of helpers were installing Looming Elections, an exhibition of woven works by 5 artists working with political themes. The storefront gallery is modest in scale, but has an impressive history of group shows with themes such as The Eighties and California Landscapes as well as solo shows including those featuring Joe the Quilter (an SDA member) and weaver James Bassler. At first the shows were coordinated with the TV series, then extended to California artists – and now represent artists from across the US. 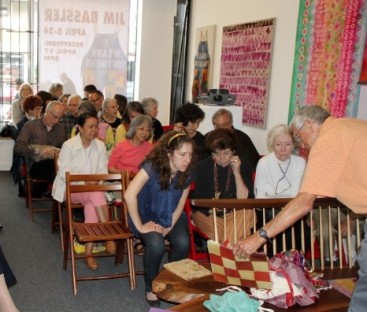 So far, every craft medium as well as CERF (Craft Emergency Relief Fund) and the Kansas City Art Institute have been represented in almost 20 shows. Since the gallery does not focus on sales, “we can borrow prized pieces from artists,” Zaiden said. In addition to Zaiden herself, curators have included Carolyn Benesh, the editor of Ornament magazine and member of the Craft in America Board of Directors.

Accompanying each show is a series of lectures in which the artists discuss their work. Each session draws about 40 people, Zaidan estimated. “I like these to open up into salons, with great conversations ranging from materials to techniques to personal history.” During Joe the Quilters’s show, a musical on a British male quilter was presented on a platform in the window; this launched a popular series of Window Concerts. 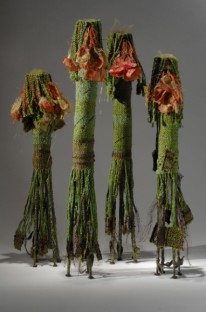 Materials in the research library – most of them donated – add up to more than 1,000 books and magazines covering textiles, wood, metal, ceramics, glass, book arts and beadwork plus more than 500 videos of artists creating and discussing their work. There are computer workstations for viewing digital materials and downloadable Educator Guides Course catalogs and reference materials on where to learn a craft.

While the library is open to the public, materials cannot be borrowed. Researchers can visit as often as they like, but are advised to make appointments. Contributions of books, brochures, and exhibition catalogs are welcome. 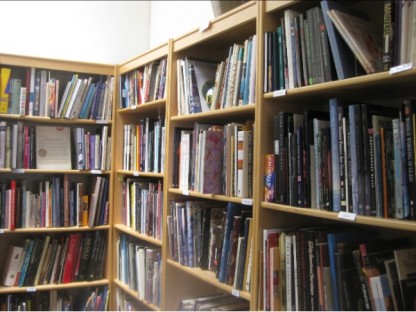 Besides its independent programs, the center has collaborated with major museums on projects that require expertise on contemporary crafts. For example, Zaiden and her staff assisted with the curatorial work for Golden State of Craft: California 1960-1985 at the Craft and Folk Art Museum (September 25, 2011-January 8, 2012). This was part of a regional project, Pacific Standard Time: Art in L.A. 1945-1980, initiated by the Getty Museum.

The center also worked in partnership with LACMA (Los Angeles County Museum of Art) in the organization of a one-day seminar at which leaders in California design, many of them craftspeople, spoke. 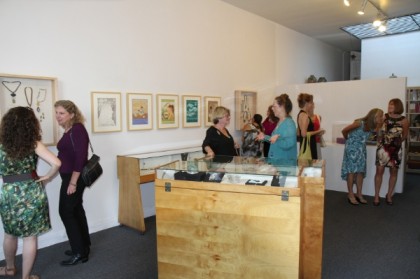 Education is a critical aspect of the center’s mission. Although artists are not sent out to schools, through the center Terese Agnew, who works in fabric, and Consuelo Jienez Underwood, a weaver, developed 2 fiber art courses to be used by art teachers in their classrooms. These include segments from the PBS programs.

The center is open Thursday, Friday and Saturday from 12 – 6 PM.
Telephone (323) 951-0610 to make an appointment to visit the archive.
For more information, visit their website at www.craftinamerica.org
and blog at seelearncraft.blogspot.com. 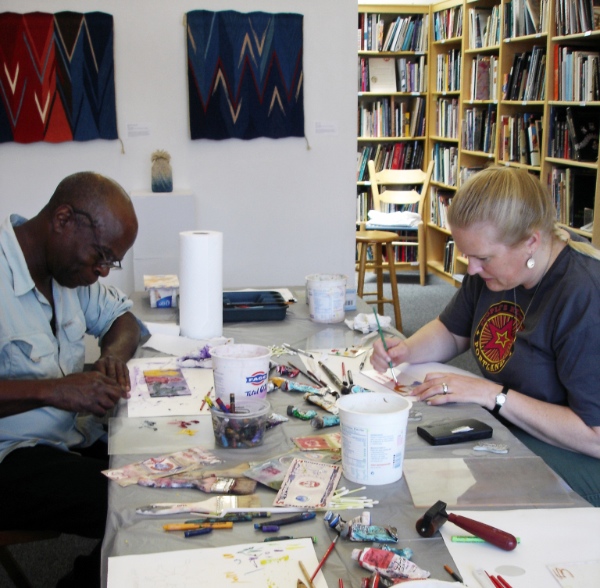