“Weaving and Knowing” by Patricia Malarcher

Weaving can be viewed as a handcraft, an ethnic tradition, a global commodity, and a prototype for binary systems. It can also be viewed as embodied cognition, a term that came up frequently during a recent conference, Weaving: Cognition/Technology/Culture at Columbia University, New York. The purpose of the conference was to challenge the common assumption that bodily techniques and tools of craft are unrelated to mental cognition. 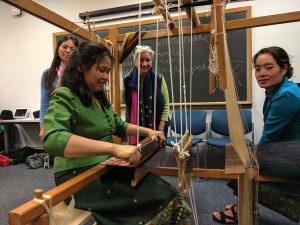 Over four days (April 5-8, 2017), international authorities in textile technology as well as scholars in a broad sweep of disciplines—economics, history, and psychology—confirmed that weaving, “an intertwining of bodily skill and cognition,” has made major contributions to knowledge. 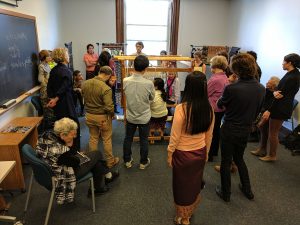 The conference was organized by Pamela Smith, founding director of the Center for Science and Society; Carol Cassidy, founder of Lao Textiles; and Patricia Greenfield, a psychology professor at UCLA. The center, which sponsored the event, is interested in interdisciplinary approaches to science, technology, medicine, and public health in past and present societies.

By examining weaving through multiple lenses, the presenters persuasively argued for the development of conceptual content from physical processes. For example, vocabulary derived from weaving and auxiliary skills is deeply embedded in language and used by people with no direct connection to the origin, as in “spinning a yarn” or “weaving through traffic”. 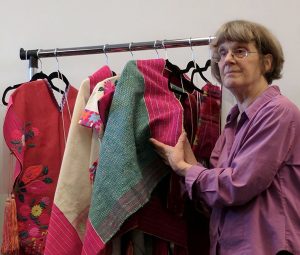 Unlike most events centered on textiles, this did not presume an attendance conversant with weaving techniques. Prior to the formal presentations, two days of workshops conducted by master weavers from Laos, as well as Germantown Friends School in Philadelphia, featured demonstrations on a loom and opportunities for hands-on experience.

Speakers offered a far-reaching overview of textile knowledge, starting with Daphna Shohamy’s analysis of how learning happens. An Associate Professor of Psychology at Columbia, she noted differences between learning what (facts and events) and learning how through activity. Identifying these distinctions has led to new understanding of how the brain supports the learning of skills and habits. Carol Cassidy and colleagues showed how Lao-Tai people have developed a two-heddle binary code for designing, storing, and retrieving complex patterns.

Referring to anthropologist Marcel Mauss’s theory that bodily techniques are rooted in both biology and culture, Patricia Greenfield discussed Mayan backstop weaving, in which the body is an indispensable part of the loom. Although transmitted from one generation to another, woven designs change along with society, Greenfield noted.

On the second day of presentations, focus shifted from weaving as a mind-body synthesis to weaving in the socio-economic realm. Viewing the ancient and still vital handweaving industry in India as a paradigm, Dr. Annapurna Mamidipudi, a science historian at Maastricht University (The Netherlands), and keynoter Uzramma, an independent scholar, spoke of weaving in relation to its cultural milieu. 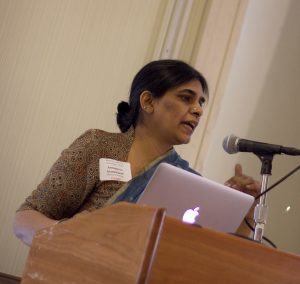 “India is fighting a prevailing notion that handweaving as a system of knowledge has been eclipsed by mechanization and the museumization of tradition“, Dr. Mamidipudi stated. Innovation by individual weavers continually adds new knowledge, but is not readily adapted to weaving in the larger economy. As an example of ongoing innovation, Dr. Mamidipudi named Jamdani weaving, in which discontinuous wefts produce non-mechanized motifs directly on the loom. A time-consuming process, this produces valuable fabrics that defy computerized programming.

Andrew Goldman’s provocative response, paralleling improvisation in jazz with that in other art forms, sparkled with refreshing insights. For example, he said that improvisation is a way of knowing, but that ways of learning can affect one’s ability to improvise. Goldman is a Presidential Scholar in Society and Neuroscience at Columbia, and also a pianist/composer. 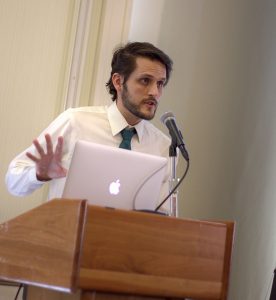 Uzramma is a prominent advocate of the Malkha model—decentralized communities of cotton farmers, spinners, dyers, and weavers working interactively in sustainable environments. She cast this “tiger of ecological manufacture of handwoven products” against the systematic erosion of India’s weaving culture that started with the imposition of British standards in the 18th century. The Malkha idea can be seen as a 21st century extension of Mahatma Gandhi’s promotion of spinning and weaving to revitalize India’s national identity.

The conference concluded with a broad leap to contemporary leading-edge textiles. Barbara Faedda, Associate Director of Columbia’s Italian Academy for Advanced Studies, spoke on the complementary roles of hand and machine work in high end ready-to-wear. “There is no conflict,” she said, citing works in the 2016 exhibition, Manus x Machina, at the Metropolitan Museum of Art. A dramatic wedding dress, for example, was sketched by hand, machine-printed, and hand-embroidered.

Clare King, founder of Propel, a company dealing with textile-driven technologies for textiles, showed a mind-bending group of inventive products including shirts designed to prevent heart attacks in firefighters by measuring temperature and pulse.

The grand finale was a slide show by Nora Ligorano and Marshall Reese, who collaboratively design and weave fiber optic threads into artworks whose colors constantly change. Projects included abstract portraits based on personal data provided by subjects. Although their work is grounded in the 21st century, LigoranoReese referred to quipus, knotted strings used for counting in pre-Columbian Peru, and master artists Josef and Anni Albers as influences. 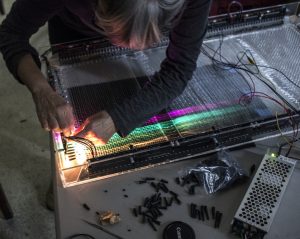 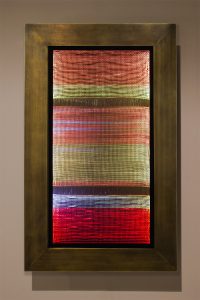 There was more, but no brief summary could plumb the depth of ideas compressed into a tight time frame. Still, my big regret was having to miss the conversation on “Needle and Thread in Surgery and Tailoring” in which Dr. Roger L. Kneebone, Professor of Surgical Education at Imperial College in London and Izzy Dabiri, who constructs costumes, shared thoughts on their similar and different approaches to their tools. 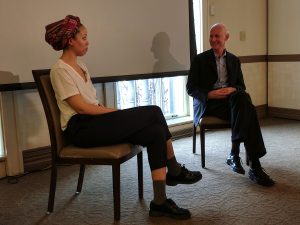 To see more from Weaving: Cognition, Technology, Culture, check out these YouTube videos:

For further information on the Center for Science and Society, visit scienceandsociety.columbia.edu

For more about LigoranoReese, read “Responsive Textiles and the Technology of Touch” by Jennifer Bockelman in SDA’s latest Journal “Making our Mark: SDA at 40” (pages 24-29)

—Patricia Malarcher is a studio artist and independent writer. She is a former Editor of the Surface Design Journal.