“Wrapping the World in Fiber: Lin Lecheng and the International Fiber Art Biennale” by Anita Bracalente

In 1962 the first international tapestry exhibition, of the post-war era, was launched in Lausanne, Switzerland. The venue became a catalyst for international dialog in new fiber works and helped envision new concepts in the craft and art of fiber and redefined the craft lexicon as “fiber art.” This event ushered to the world stage many now familiar names in fiber arts: Sheila Hicks, Magdalena Abakanowicz, and Olga de Amaral to name a few luminaries. The craft itself muscled its way from the wall to free standing fiber sculptures and works formed in a contextual dialog with architecture, but after 30 years the Lausanne International Tapestry Biennale dissolved in 1995. 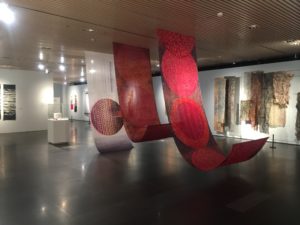 As one Chinese fiber artist, Lin Lecheng, was reaching his stride in the fiber arts, he was greatly saddened by the close of this international platform. In a mere five years, however, he resurrected this international event through his vision, selfless efforts, and his love for cultural exchange, christening this new international fiber venue: From Lausanne to Beijing International Fiber Art Biennale. 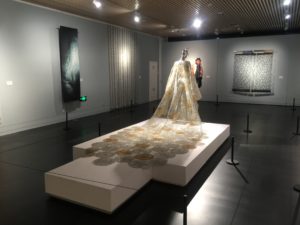 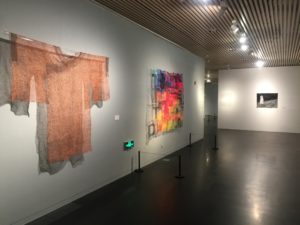 I was working at the Tsinghua University Art Museum, Beijing, in September and I asked my hosts if I could have an introduction to the fiber arts faculty at the Tsinghua Academy of Arts and Design. There I had a chance meeting with Lin, a charismatic and energetic professor, international fiber artist, dedicated teacher, and director of the fiber arts programs at the academy. Little did I know that I had just walked into the epicenter of Chinese fiber arts in the country. I was a month too early for the event. I came armed with our Surface Design Publications, which everyone was very eager to have. 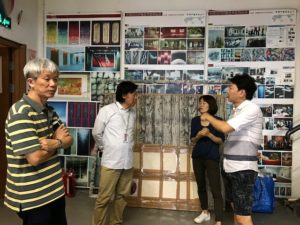 While working with a translator, though some information and details dropped woefully by the sidelines, we had a three-hour, lively conversation. I toured the academy studios, where tapestry and Gobelin technique were largely in use. Gobelin literally meaning painting by a needle stitch a technique perfected by the French and generally worked on a vertical loom where the weft threads are guided with a needle or fingers through the warp and firmed into place with a fork or tined wooden beater. 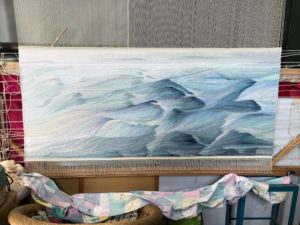 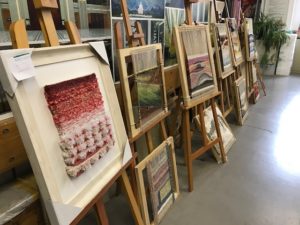 In the 1990’s Lin sought out the Georgian Gobelin tapestry artist Givi Kandareli to teach Gobelin tapestry techniques at the academy. Fortunately, Givi’s wife is Chinese and can translate through what has become this long professional and personal friendship. Lecheng also spent time in Georgia to learn from Givi as well as traveling to Europe to learn and observe at other tapestry workshops and to perfect these tapestry techniques in his own work. “Painting with thread” greatly appealed to Lecheng as he is a fine colorist and trained as a painter.

The teaching emphasis is on the students’ total production; from inception of their design ideas, through completion of the work—with dyeing,wool and silk, or any other materials (manufactured, repurposed, or found). It is a nurturing environment where much experimentation is enthusiastically encouraged. Since 2005 the fiber art studios were renamed from fiber art studio to fiber art laboratory, with an emphasis on experimentation and exploration in both technique, execution, and ideas.

[insert picture of another student work] 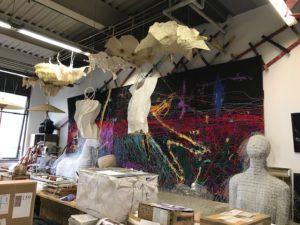 During my meeting with Lin, he was eager to continue making connections with artists in the United States and he was very welcoming to me, as is confirmed by other artists who met him at the symposium. After organizing 10 biennales he has proclaimed that he is stepping aside to allow younger artists to steer future exhibitions though his enthusiasm for exchange has not waned.

Now in its 10th cycle, the exhibition was held at three venues: the stunning Tsinghua University Art Museum, designed by world renowned architect, Mario Botta, the Tsinghua Academy of Art and Design with their sumptuous gallery spaces, and the A.C. Art Museum Hotel on October 16–November 17, 2018. 43 countries were represented in this year’s exhibition with an overall participation of seventy-seven artists, eight, of which, were from the United States: and four are SDA members: Alex Friedman, Marie Bergstedt, Deborah Corsini,  and Susan Taber Avila. 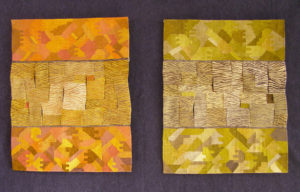 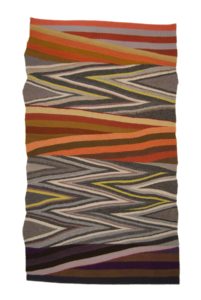 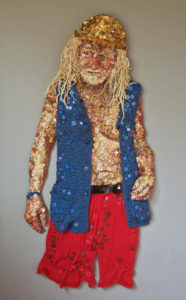 Marie Bergstedt and Deborah Corsini were fortunate enough to attend this year’s symposium. Both described the conference as welcoming and highly engaging amongst all of the visiting artists across the globe and the exhibitions organizers caring, warm and friendly. Deborah Corsini was one of the presenters with her topic: Perspective from North America: Trends in Contemporary Fiber Art. Lin believes in sharing, inclusivity, and the advancement of fiber art ideas and techniques. He invited Marie Bergstedt to offer a workshop in her button technique and embroidery this December for the 2018 Chaozhou International Embroidery Art Biennale, with the theme of “Embroidery and Contemporary Life. For this 10th year biennale, a hard copy catalog of essays, interviews, profiles of various international fiber artists, and panel discussions of fiber art symposia are featured from the past ten exhibitions. The abstracts of the papers are in English, but most of the content remains in Chinese. 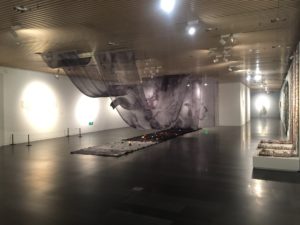 As artist to artist we were acutely aware of the current political frictions between our two nations. But as the curator for this year’s biennale stated, fiber art has no boundaries and this sentiment is echoed also by Lin Lecheng as he states “fiber is an intimate medium” and it is clear these threads bind us together across all borders.