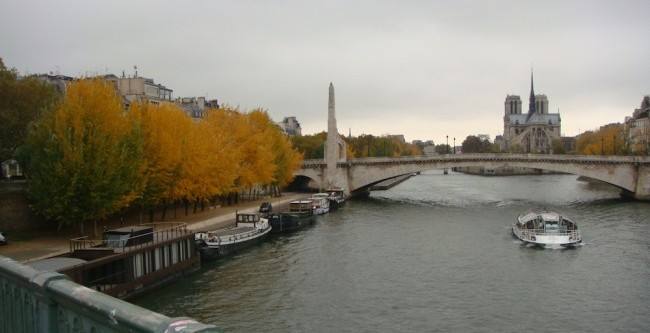 France has a long, rich history of textile production, but the contemporary fiber movement is less than prominent. This always surprises me, since it was Jean Lurçat who fathered the 20th century revival of tapestry – and the Lausanne Biennales of 1962-1995. The occasional textile art I see in Parisian galleries includes works such as  Marie-Hélene Guelton’s shibori-infused art with a refined sense of hand and material, shown below. 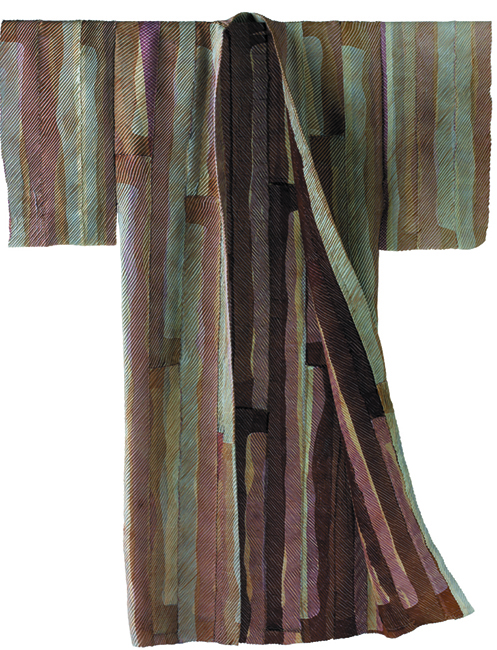 In autumn 2014, I traveled to Angers for Asie/Europe 2: Art Textile Contemporain at the Jean Lurçat Museum. There I saw wonderful works by Japanese artists and representatives of 11 European countries. Curator Françoise de Loisy’s tour of the exhibition elucidated 6 cohesive themes in this diverse collection: Feminine Presences, The Artifact: the eye and the hand, Memories of the Forest, Images, Textures and A Garden. 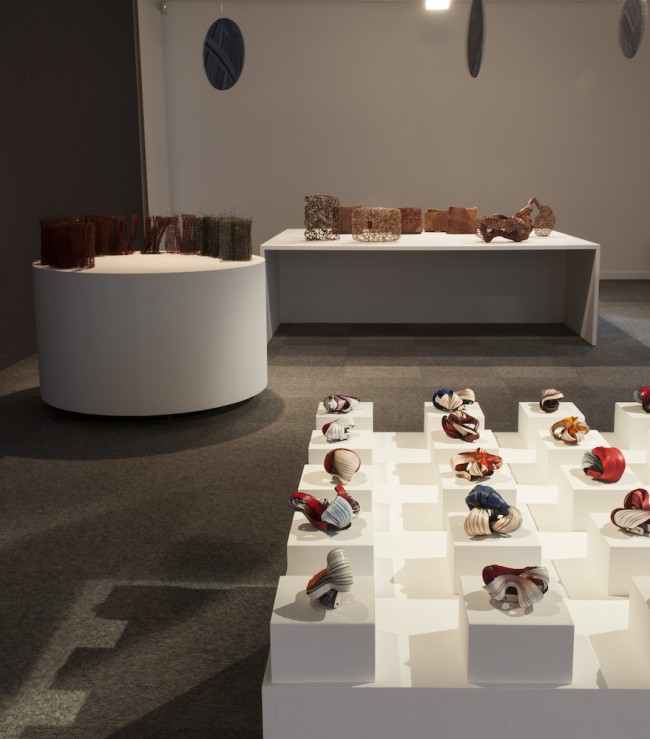 In the exhibition catalogue, artist/curator Erny Piret wrote of innovative technique, sculptural presence, transparence, relative monochrome and restraint as curatorial criteria for selection of work. The European voices complimented their Japanese colleagues (example shown below) in this important – and elegant – exhibition. 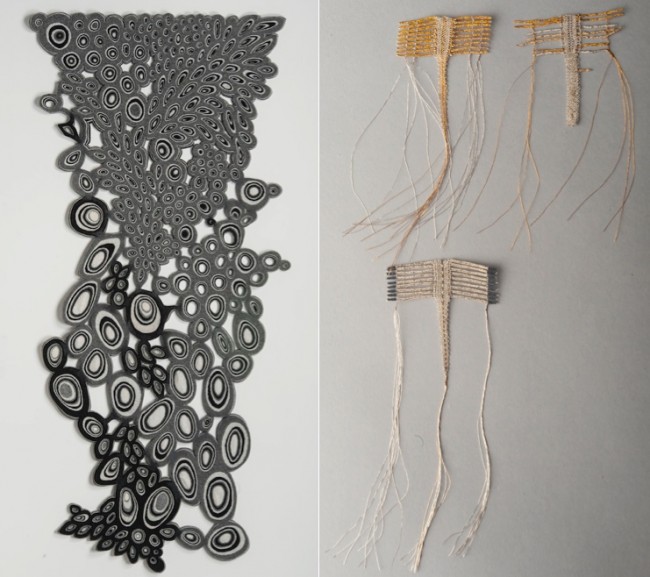 Also on view were Thomas Gleb’s paintings and the tapestries woven from them 40 years ago (below). His paintings are uniquely suited to translation into fiber medium, undoubtedly due to his training as a weaver in his native Poland. Gleb’s quiet abstraction remains appealing today. 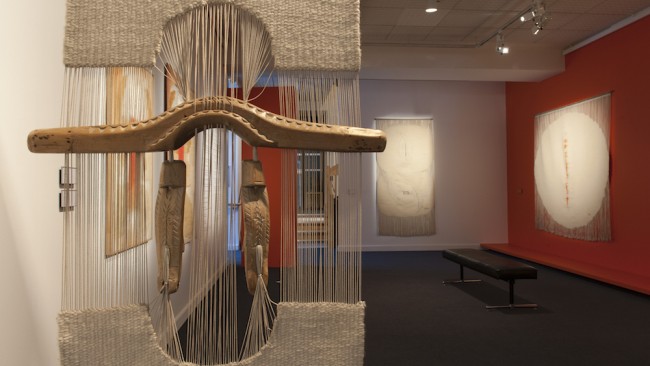 In the adjacent Hôpital Saint-Jean hangs Le Chant du Monde, Lurçat’s magnum opus of 10 huge apocalyptic tapestries defining man’s place in the universe in the 20th century (below). Whether one is attracted to his style or finds it dated, the sheer monumentality of these tapestries demands respect.

Nearby is a single tapestry workshop, the Atelier des Liciers Angevin, founded in 1980 by graduates of the textile program at the local university. Originally, Angers boasted 8 or 10 such workshops. This last remaining one is home to 4 artists. Helène Delachenal-Vilain’s work deals with time and music – and includes real keys and instrument parts. Martine Plait’s charming tapestries show her expertise as a colorist (below and at bottom). 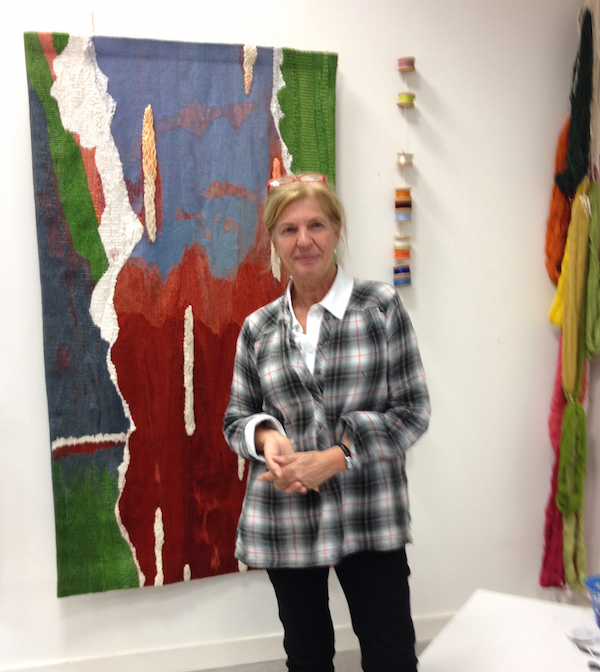 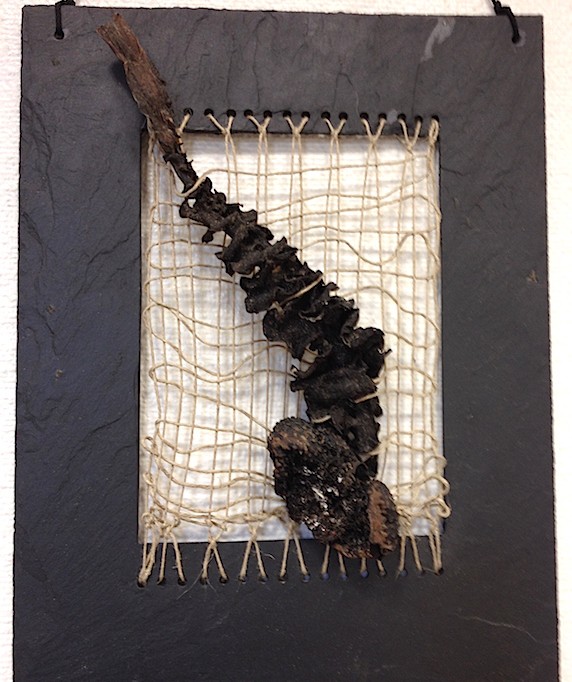 Edging ever closer to extinction is the once important silk industry in France. I visited La Magnanerie, Maison de la Soie d’Anjou, a “display” silkworm farm, housed in a troglodyte (cave dwelling) in the small village Le Coudray-Macouard. 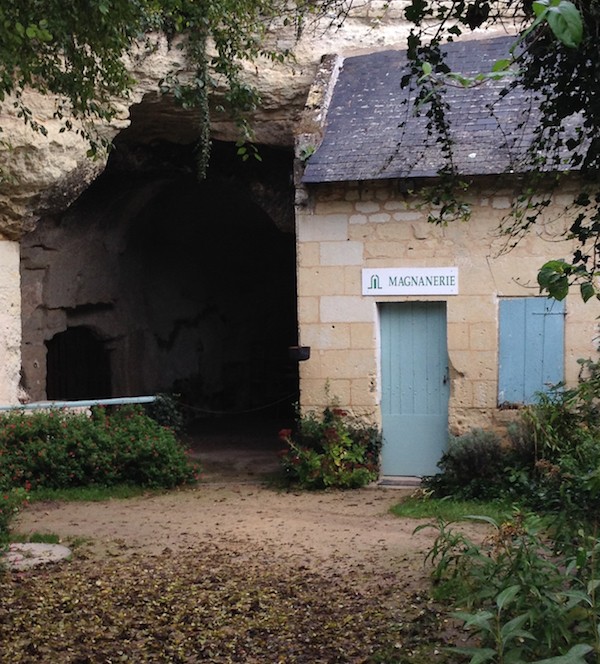 Magnanerie means big eaters in Latin; the worms eat all day long! The labyrinth of caves is actually a series of old quarries, dug for the soft rock that built feudal cathedrals and chateaux. Along with historical information, we were introduced to odd silk varieties – like sea-silk made by mussels (a tradition still alive in Sardinia) and spider-silk -currently being studied for industrial applications. 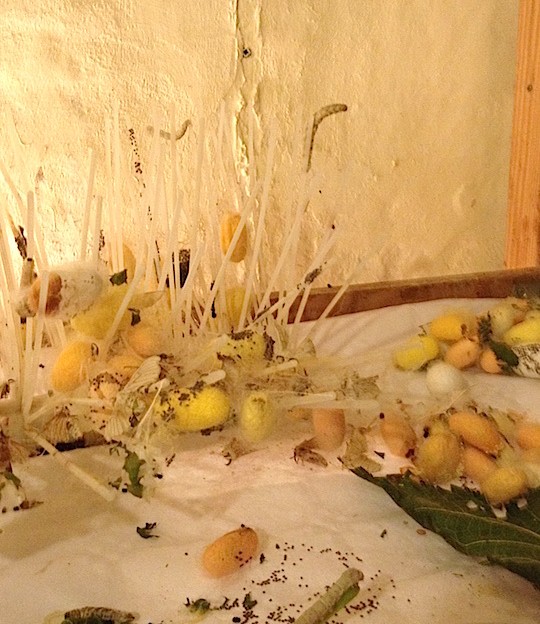 The Magnanerie gave only a glimpse into a once flourishing French tradition – though it was never actually housed in the caves, which would have been too cold. Silk production was important near Angers and Tours from the 15th to 17th century, when the entire industry was moved to Lyon with its more navigable rivers. The canuts or weavers of Lyon are better known than silk makers in this area. Sadly, there is no more commercial silk production in France. And now that the use of pesticides has reached the local mulberry trees, this year might be the Magnanerie’s last. 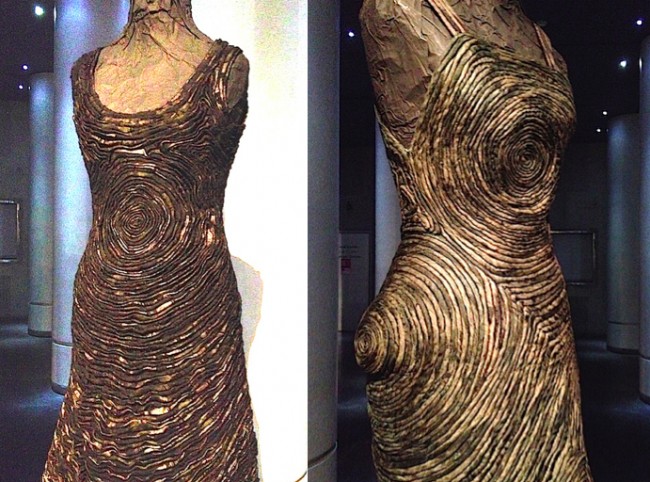 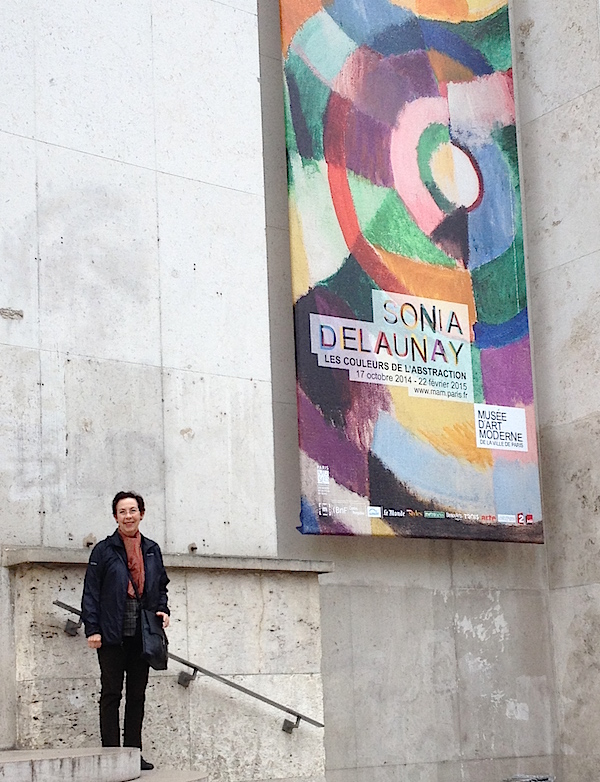 Museum of Modern Art had a spectacular Sonia Delaunay exhibition, including some of her early fabric collages and garments demonstrating her dramatic sense of color and pattern. 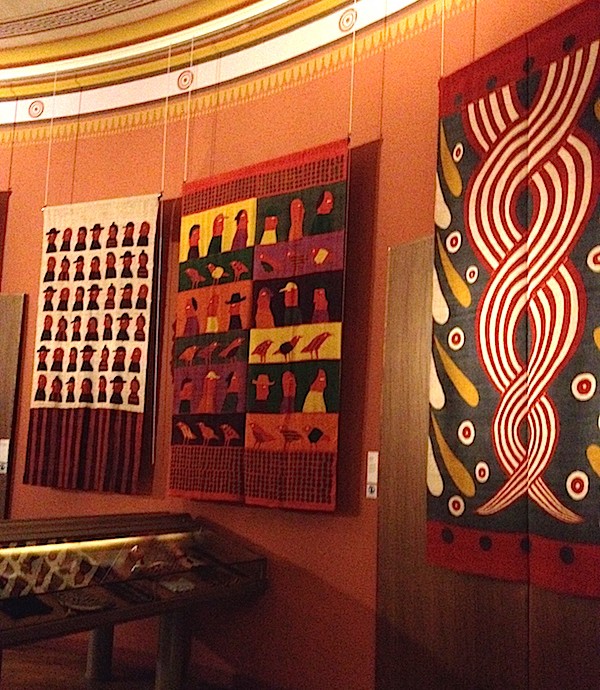 Musée Guimet presented Samiro Yunoki: La Danse des Formes. Yunoki is a katizome (stencil) artist who studied with the master Keisuke Serizawa. His very modern and joyful approach is presented on large panels of hand printed cloth (shown above and below). 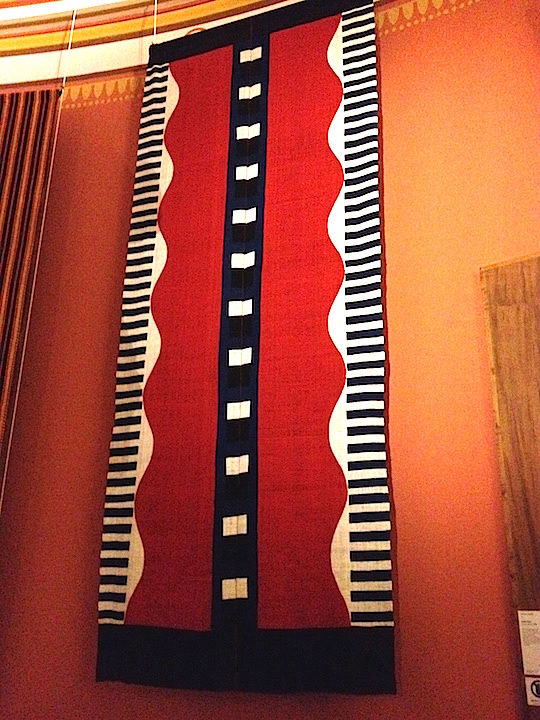 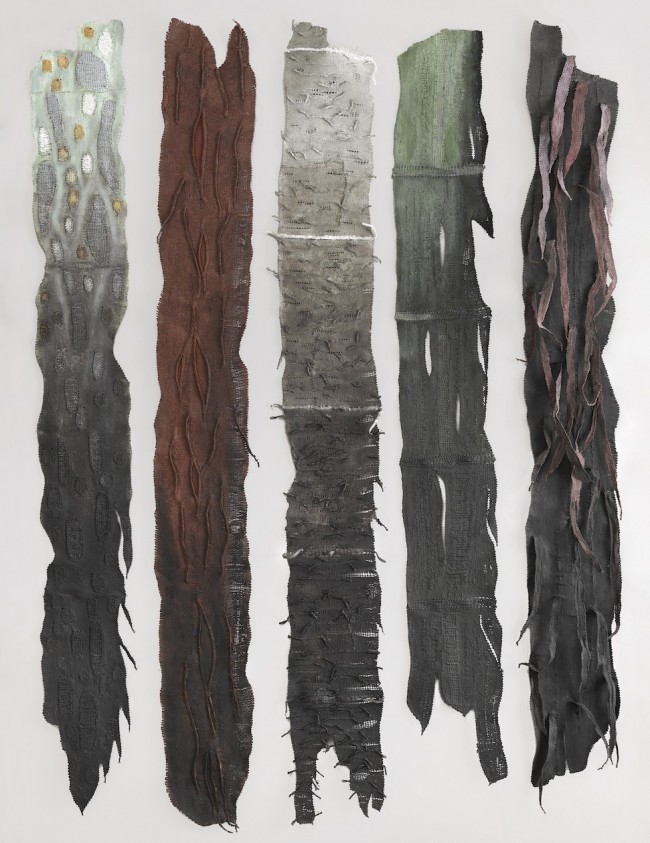 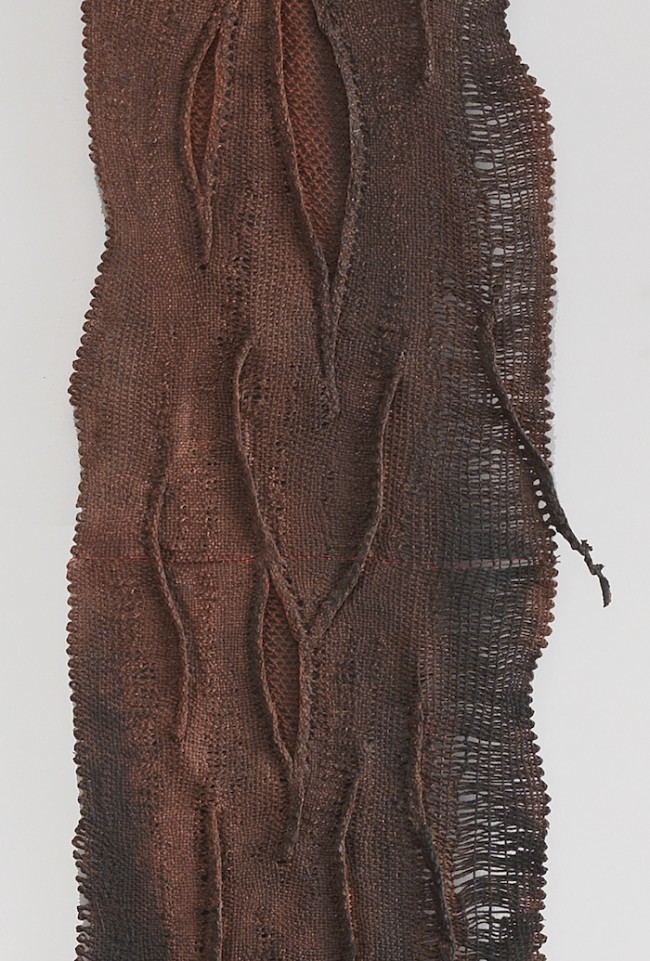 Also working in Paris is Marie Noelle Fontan, a weaver who incorporates plant material into large ethereal hangings woven on a simple frame loom. Having shown in the first Asie: Europe (2011), she is quite unique among French weavers. Her delicate constructions incorporate natural materials – often sourced in Guatemala where she spends part of the year. Her structures speak of the exotic and address our need to respect nature in all its diversity. 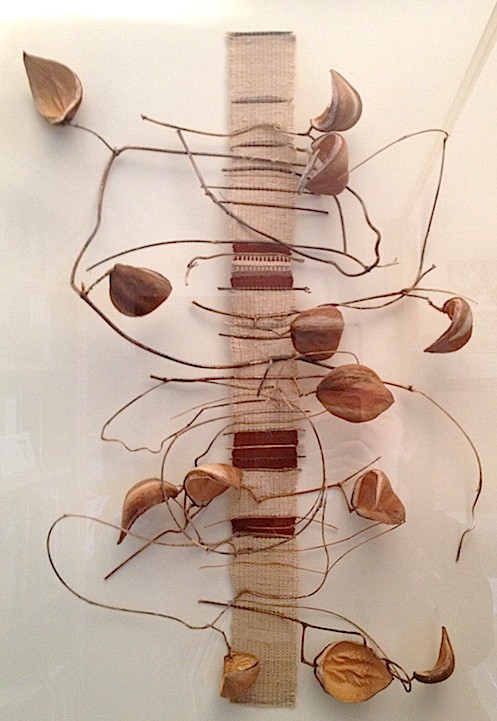 I have always enjoyed the traditional French crafts and polished “artisanal” practices, including hand beaded couture gowns, hand quilted Provencal garments and colorful precision-printed Hermès scarves. The French rightly prize their textile history. I am happy to see growing interest in contemporary textile art that builds on the past with innovation and new vision. 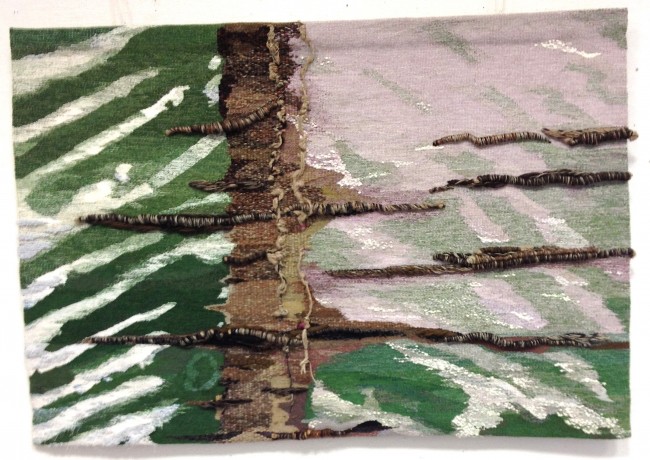 Barbara Shapiro is a weaver, dyer and basket maker. She has shared her rich knowledge of historical and ethnic textiles and her broad technical experience at San Francisco State University and in workshops around the U.S.

Shapiro’s hand-woven silk wall works and plaited and coiled baskets have been exhibited internationally. Indigo dyeing is her specialty and informs much of her current work. Her work and writing on textile subjects are frequently published; this is her third story for SDA NewsBlog.

She is a past board member of Textile Society of America and an advisor to San Francisco Fine Arts Museums’ Textile Arts Council.