Allie Dudley is an artist I met in 2017 at Penland School of Craft in Spring Concentration, while I was co-teaching with Bhakti Ziek. In that eight-week session Allie was like a sponge, asking many questions and eagerly soaking up every suggestion. They spent long day and night hours hard at work in the weaving studio, taking advantage of each moment while there.

The Penland Concentration experience was just the tip of the iceberg for Allie’s many interests in fiber. They’ve also explored spinning, natural dyeing, stitching, bobbin lace and knitting. Originally from Charlottesville, Virginia, Allie attended The University of Chicago to study film. “I made my thesis using 16mm, and even though I don’t work much with that medium anymore I think I was interested in the same aspects of filmmaking as I am in textile art. The physical nature of analog film was really important to me, and even before I really began my craft journey I was focused on making ‘well-crafted’ films.” 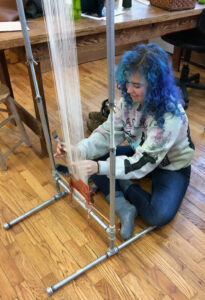 Before graduating from college Allie happened to visit friends at Warren Wilson College near Asheville, North Carolina. “One of my friends at WWC was a weaver in the school’s Fiber Arts Crew and invited me to help her thread a loom, and I was immediately hooked. Once I got back to Chicago, I sought out weaving classes at the Chicago Weaving School and the rest is history for me!”

Since 2017, Allie has done production weaving at several places in Western North Carolina including with Milissa Dewey at Mountain Mama Weavers, Two Crows Alpaca Farm, and for Jessica Green of A Little Weather. They are also a part-time cross-stitch designer for Sassy Jacks Stitchery in Weaverville, NC. In 2021, Allie became the Resident Artist of Weaving, Rugs, Thread Art, Lace and Beading at John C. Campbell Folk School. Recently I asked Allie which of those experiences has been especially significant at this point in their life? 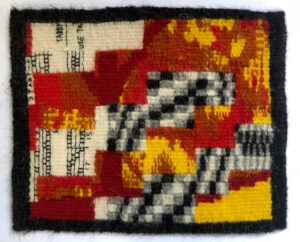 “Right now my job at the Folk School is really important to me. It means a lot to be a part of the textile lineage at the school and to be a part of the Brasstown community.” Allie wants to be instrumental in introducing new weavers to the rich traditions of textiles in the Southern Appalachians. 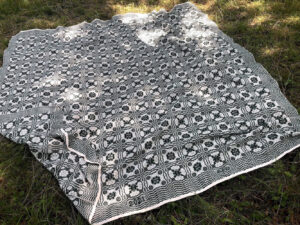 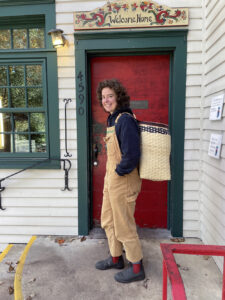 Allie sees craft is a tactile medium and feels that the whole nature of a handcrafted, physical object can’t easily be communicated across a digital platform. “Craft is too big and ancient to be held in the container of social media, and even though those sites have let me see more art, craft as a medium is incompatible with being consumed primarily in digital form.”

Although Allie is adept at social media interactions, they use them with mixed feelings. “I think that while social media is great for forming a connection, as a platform and a medium for communication, the big sites are controlled by corporations which means that they are being run in order to make money.” 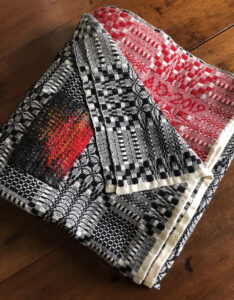 As Resident Artist of Weaving, Rugs, Thread Art, Lace and Beading at John C. Campbell Folk School, Allie Dudley is committed to the decades-old, well-established program. They are one of the next generation that will carry on traditions of making while also adding their own aesthetic and interpretation to enrich those traditions for the future. 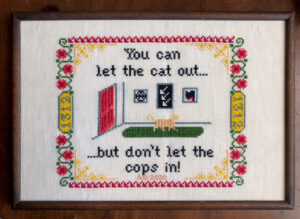 Allie Dudley, You Can Let the Cat Out, 2020. Cross-stitched with cotton embroidery floss, linen, 10 x 14 inches. Photo by the artist.

In 2021, Allie was selected for the South Arts Emerging Traditional Artists program. Over the next three years, grantees will meet and discuss common interests in traditional crafts. The award will also provide funds to attend courses or conferences.

–Tommye Scanlin is Professor Emerita, University of North Georgia, Dahlonega, where she began the weaving program in the 1970s. She is the author of The Nature of Things: Essays of a Tapestry Weaver (University of North Georgia Press, 2020) and Tapestry Design Basics and Beyond: Planning and Weaving with Confidence (Schiffer Publishing, 2021). Scanlin is a Fellow of the Hambidge Center and the Lillian E. Smith Center. She serves on the Board of Directors of John C. Campbell Folk School and the Lillian E. Smith Center. 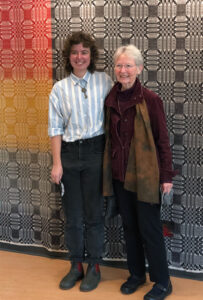 Allie Dudley (left) and Tommye Scanlin (right) in front of Blooming Leaf during the opening reception for Pulling the Thread: A Brief Survey of Appalachian Textiles, 2021. Rabun Gap-Nacoochee School, Rabun Gap, Georgia, US.