This month, Conversations with Cloth, debuted Episode 3: Itajime Shibori/Clamp-Resist, hosted by Yoshiko Iwamoto Wada and Ana Lisa Hedstrom, from Slow Fiber Studios. The focus of the series continues on the core concept of the transformation of cloth, 2D pliable plane to 3D shapes, a dimensional transformation that is the essential concept of shibori, explained in Yoshiko’s first publication “Shibori: The Inventive Art of Japanese Shaped-Resist Dyeing” (1983). This Japanese term with overarching concepts replaces the inappropriate English term ‘tie-dye’.  In this episode, they focus on the process of manipulating the cloth by folding, clamping, and dyeing, called itajime, ita is “board” and jime to clamp.

The two simple actions, folding and clamping, affords the dye to record a myriad of patterns reflecting artists’ hands and geometry often corresponds to  the art of origami. In this process, heat can be used instead of dye on polyester to record the 3-D shape. In this review, Yoshiko and Ana Lisa demonstrate how history, itajime board design change, masters of medium and contemporary adaptations by designers and artists of the 21st Century continue to push innovative application of the process on 2D surfaces to achieve visual languages.

Yoshiko traverses through history to the 8th century when the ancient capital was in Nara, before Kyoto, where the Shoso-in at the Todaiji Temple housed the treasures of Emperor Shomu. Among the textile treasures three earliest resist-dyeing techniques are found; kokechi, tied, stitched or bound resist; rokechi, wax resist; and kyokechi., which is now called itajime shibori. 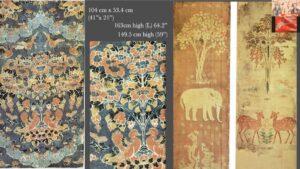 Little is known about kyokechi, the ancient carved board clamp-resist textiles which must have traveled to Japan from Central Asia, India, and Persia along the silk road during the Tang Dynasty. Archaeologists found kokechi and kyokechi silk textiles similar to those in Shoso-in in Turfan and other burial sites in China. 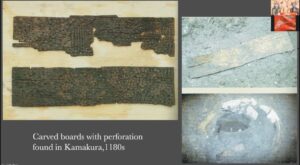 The process of carved board & clamp resist-dyeing is based on  the production efficiency. Unlike mono print or painting, artisans are able to produce multiples and repeat the same pattern. Itajime craft reflects the economy of action, skills, tools for maximum production and best outcomes. Through the centuries the boards trace from carved boards to geometric designs, employing single pairs and multiple boards. The carved boards with perforation found at an archaeological site in Kamakura, Japan, dating 1180 attest this craft continued in Japan until the 20th century. 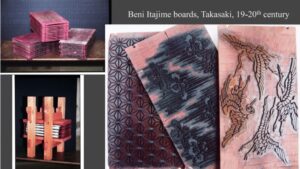 In the Edo period (17th-19th century), carved boards for resist-dyeing developed into highly decorative multiple boards, for mass production as an efficient way to dye kimono silk in red from safflower petals. It has to be folded continuously in accordion folds first, then clamped before dyed. 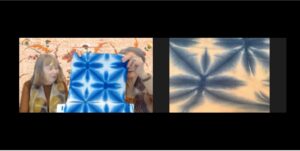 Designer Ana Lisa, confirms this basic geometric design has affinity to contemporary practices due to the “bold and graphic” expressions and “immediate and straightforward” transformation processes that provide numerous variations, combinations, webbing one point or another, over folding and dyeing endlessly.

Yoshiko highlights Hiroshi Ishizuka, Ana Lisa Hedstrom and Issey Miyake who explored the itajime process and translated it into outstanding fiber art. Ishizuka in an art installation focusing on the visual language inherent in the clamp-resist. Hedstrom combines the material specificities such as sericin removal (scouring) in organza silk, wool with natural dyes, deconstruction and assemblage of patterns into art panels. Miyake capitalizes on the possibility of dimensional transformation by folding in his fashion using polyester, heat in place of dye, resulting in a kinetic sculpture when worn. 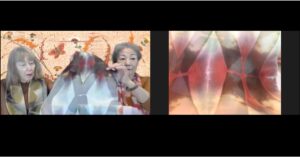 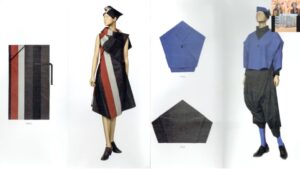 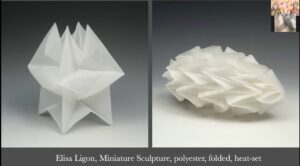 Elisa Ligon, her miniature sculptures are created by complex folding and heat-setting the polyester fabrics that memorize the creases. She starts with drawing a grid on cloth, stitching certain points to articulate a particular pleated design. 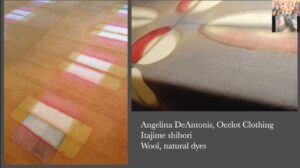 Angeliana De Antonis, Ocelot Clothing designs use simple oval or circle shapes on regionally-sourced wool and natural dyes, creating her signature style for decades. Her world is the example of an artisan honing her skills through hands-on processes grounded in her daily life experiences. 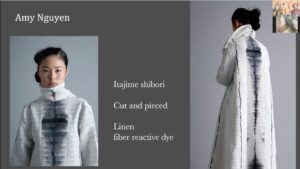 Amy Nguyen, utilizes basic geometric itajime resist pattern. She follows the transformation of geometry, dark and light on the dyed fabric, cutting, stitching to create a dramatic visual statement with complex details and fine texture resulting in an unique and elegant fashion.

Conversations with Cloth last episode #4 was on January 6. For access to all four episodes visit Slow Fiber Studios to register. The series will be archived as a collection of documented oral histories, ideal for inspiration, educators, scholars of craft, design, textile, and art.