Surface Design Association functions primarily on the energy provided by a vast network of dedicated volunteers. While there is no doubt SDA appreciates this service, sometimes a thank you doesn’t go far enough. So I suggested to Managing Editor Lauren Sinner that a recurring artist conversation with a volunteer would go a long way to expressing our gratitude to this group of dedicated people. It seems to me that a meaningful gift for volunteering time and effort is exposure to the fiber art community by the only organization that represents all fiber artists in the world. I suggested Anna Carlson to be my first guest and I was glad when Lauren concurred. This conversation coincided with the article in the Summer 2017 edition of Surface Design Journal, “Making our Mark: SDA at 40”, about Carlson and her group SD8 who are all SDA members dedicated to producing excellent art exhibits. 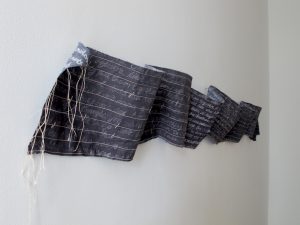 Anna Carlson and I have never met in person but we have developed a very 21st century friendship as colleagues working on the Member Resource Team on projects via Google Docs and the phone. She is a dedicated volunteer for whom contributing to the SDA is an important part of being an artist. 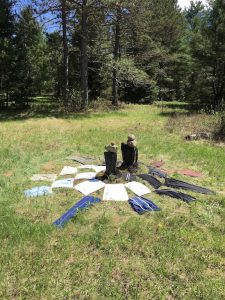 Anna Carlson Next Life 2016-ongoing, used clothing installation to study the imprint of the garment industry on the world.

Carlson, MFA from University of Minnesota College of Design, splits her time between residences in Minnesota and Wisconsin. With studios in both locations, Carlson revels in the outdoors—an essential aspect to her artistic process. This direct access to nature represents a sphere for thinking about the world as bigger than her. She takes the time to consider universal topics and returns to her more confined studio space to focus on the issues in smaller pieces. 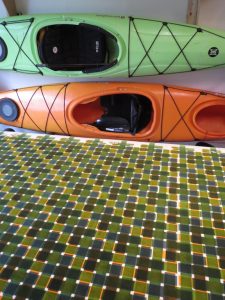 Carlson’s installations are the result of research projects: the work records the process of learning about or making sense of something. For example, in Wisconsin she studies invasive species and uses this experience to notice how plants grow and what plants grow together. These observed patterns are later translated into visual patterns repeated on cotton and silk with dyes, inks, and embroidery. In the woods, Carlson describes herself as an intentional gatherer of plant stuffs that may later be effective dye materials. 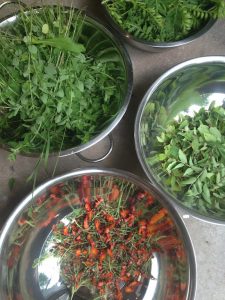 There is an important distinction between the words project and piece in her work. A project is a course of study and investigation that results in a piece of art. Carlson is very likely to be collaborating with another artist in her community while concurrently working on solo projects in her studio. She works on many projects at once, often more than three at a time. This process of joining forces with artists in other media enriches her work. Carlson shares her organizational skill and artistic knowledge as a member of the artist group, SD8. She contributes this with local musicians as well when she participates in their performances. 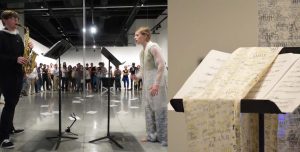 When collaborating with musicians, her art adds a visual dimension to the music as a kind of accompanist and music interpreter. After discussing a composer’s inspiration for her score using extensive musical vocabulary, Carlson was confused and mystified. So she created pieces that explored pattern in panels upon which were printed nonsense words as well marks and symbols meant to reflect this confusion. These panels and pieces hang within the musical space as another component of the performance. 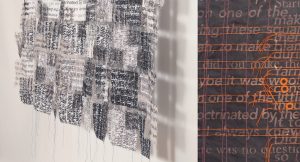 One can imagine that finding inspiration and designing a project like that mentioned above could result in some creative blocks. Carlson regards those moments as manifestations of fear and wisely returns to the familiar when faced with this challenge. She makes something she knows how to make—a garment or some cushions. The simple act of making creates openings and re-energizes her. Actually moving her body with a turn on the Stairmaster or a walk in the woods allows her to relax and her brain percolates again. 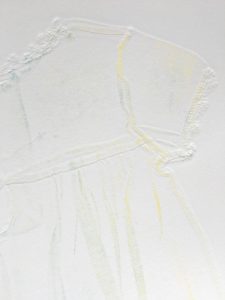 Consistent with Carlson’s approach to making art, is a current project about the ubiquitous topic of mental health. Focusing her work on the issue of depression, the 140 Days Project, reflects average length of a major depressive episode. This piece is comprised of 140 indigo-dyed handkerchiefs accompanied by printed personal writings by those suffering with depression as well as medical statistics highlighting the toll of this disease. 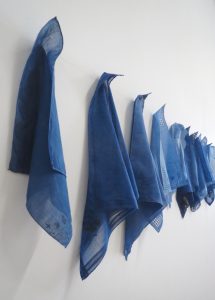 Another project in process is called Body Love/Body Hate that explores the conflicted relationships women have with their bodies. Carlson will print with undergarments creating yet another pattern on the cloth. 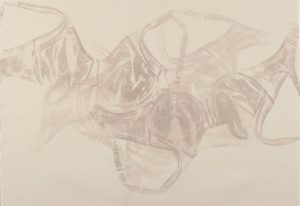 Anna Carlson brings a very interesting perspective to the world of fiber art as she focuses her work on universal concerns broken down into repeating patterns so we can relate more directly to her message.