Camp CARPA: Craftivism in the Desert 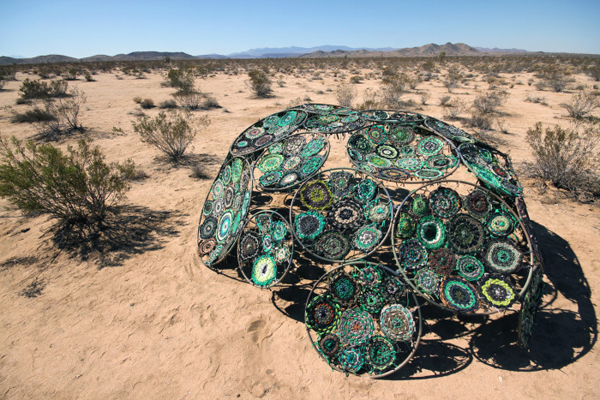 Military actions, both instructive and destructive, take place constantly all over the world. 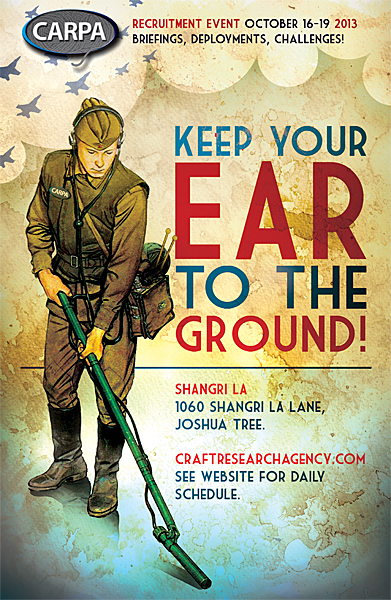 In fall 2013, a very different regimen of field exercises was staged by the Craft Advanced Research Projects Agency (CARPA) in the high desert plains of Joshua Tree, California (October 16-19, 2013).

Camp CARPA enlisted the covert creative energies of over 2 dozen artists, designer, performers, and researchers. All could be labeled as “agents of change” intent on activating the potential of communal craft engagement as a powerful tool for political awareness.

Each day followed a strict schedule of activities, beginning with a directors’ briefing from CARPA founders Carole Lung (a.k.a. Frau Fiber), activist artist and educator; Otto Von Busch, fashion hacktivist and strategist and Sara Clugage, artist and founder of the literary website dilettantearmy.com.

Participants gave project presentations – many with inspiring examples of historical wartime practices and craft-based political protest from other countries. 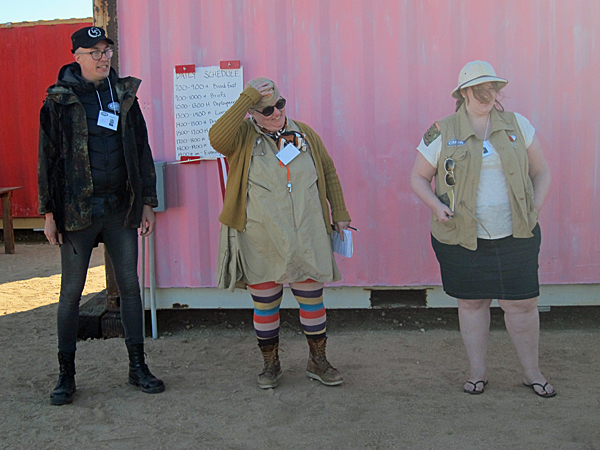 CARPA was formed in response to DARPA, the Defense Advanced Research Projects Agency, which develops new technology for US military use. Officially, “CARPA’s mission is to maintain the technological superiority of US artisans and prevent technological surprise from harming our craft heritage and innovative edge… CARPA is a catalyst in collaborative contemporary craft practices and aims to enhance their role in the contemporary art dialog and approach.” 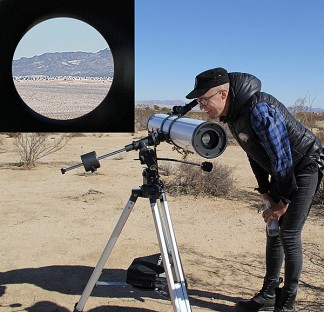 A vital component in creating this dialog is Carpaleaks (inspired by WikiLeaks), which functions as a foil of subversive news stories to question assumptions about authority and power.

Home base was Shangri La, a modest ranch house flanked by converted shipping containers that served as barracks.

Sleeping gear was supplied – along with 3 meals a day and happy hour cocktails. Days were sunny and 70 degrees, but nights chilled to just above freezing.

Due north was Ertebat Shar, the mock Afghan village used for military training by US soldiers at Fort Irwin Army Base. Joshua Tree National Park, to the south, was closed due to the US Federal Government shutdown.

A requirement that everyone wear uniforms of their own design added to the spirited air of camaraderie and roleplaying. Sewing kits and CARPA patches were issued upon arrival. 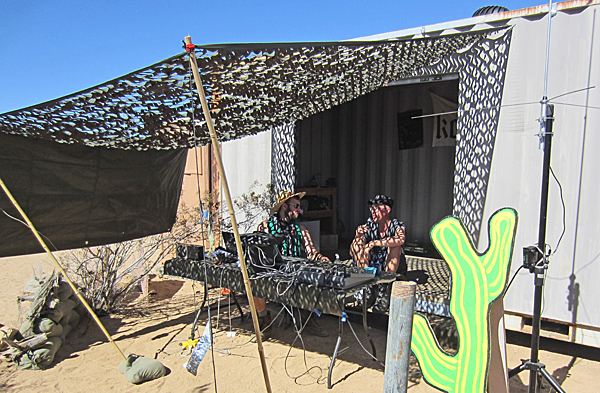 Agents (with field-issue suitcases in hand) developed 17 missions to explore “innovative approaches in craft, devices, and systems. Successful proposals [took] into account the role of craft in the modern military-industrial complex and the rigors of field use.” 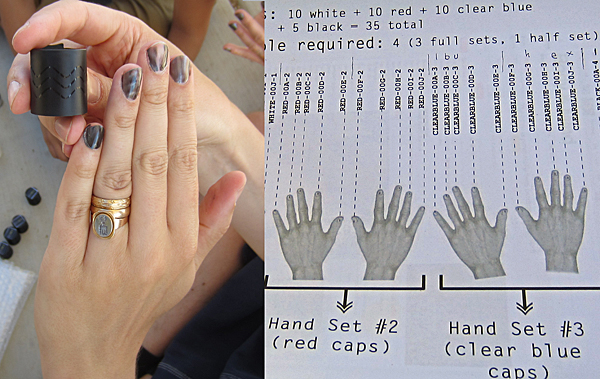 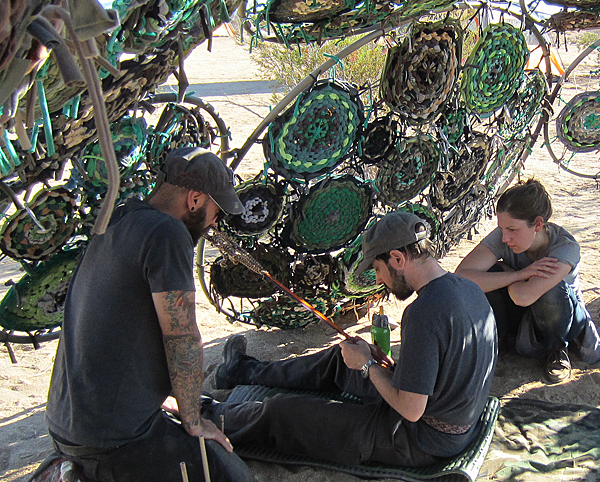 This enchanting textile/metal structure offered a shaded space for respite, rehearsals and Rob Mertens’ Encryption Cloth back-strap weaving workshops. “For centuries, Andean cultures relied on methods of tying knots or weaving information into cord or cloth. These fibrous codes confused the Spanish during colonial times and continue to prove difficult for contemporary translators.” (Click to carpaleaks.org for more information). 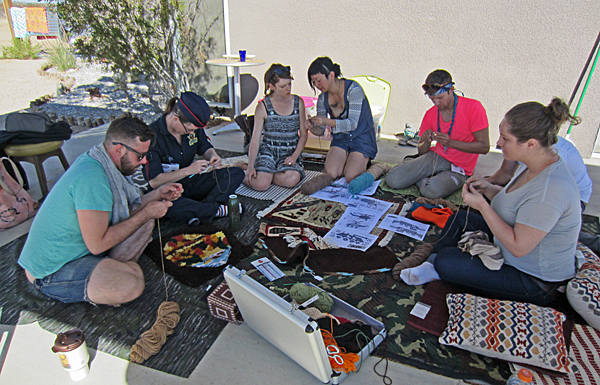 Stephanie Syjuco commandeered the house’s back porch for her Afghanicraftistan project. “Conflating the domestic craft of crochet with the phenomena of Afghan ‘war rugs,’ I presented a series of workshops and discussions about issues of empire, cross-cultural ‘infection,’ and the residues of global conflict embedded in craft traditions.” 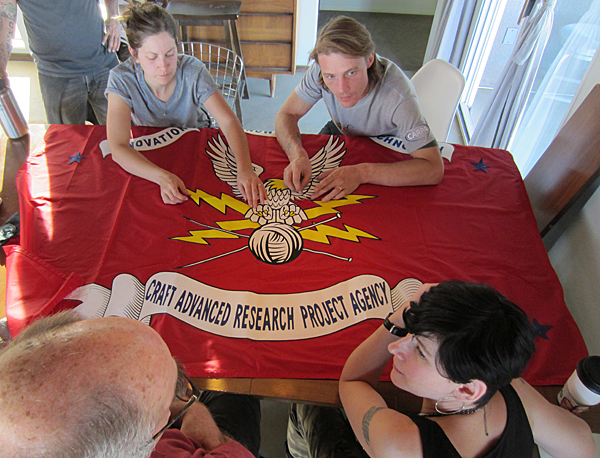 Lisa Vinebaum conducted a roaming sewing circle to communally create the CARPA Flag, which “proudly displays the organization’s name, together with its motto: Innovation – Knowledge – Technology.” The color palette and symbolic imagery (ball of yarn and needles, stars, and eagle, etc.) were inspired by the US, Air Force and Marine logos and flags. 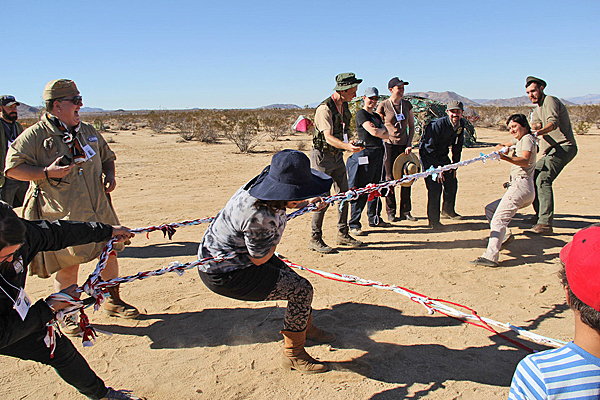 Afternoon activities included a Directors’ Challenge for collaborative problem solving. As an example, Team Fiber faced off with Team Technology to make long twists of rope from recycled t-shirts. The ropes were used for a tug-of-war – with Team Fiber ultimately claiming victory! 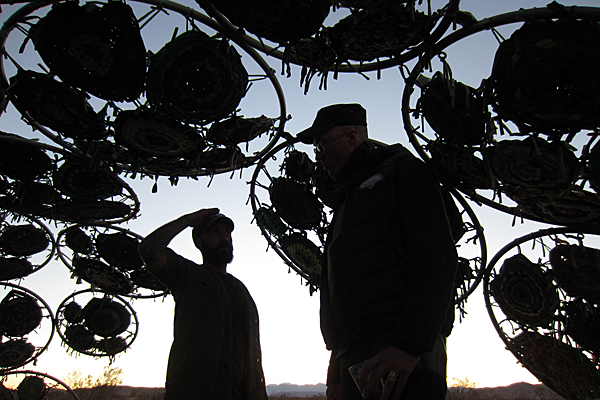 This complex yet productively harmonious 3-day event was sponsored in part by a grant from the Center for Craft, Creativity & Design in Asheville, North Carolina.

Camp CARPA will be recruiting new agents of craftivism at the upcoming World Maker Faire in New York City September 20-21, 2014.

For updates and more in-depth field reports from Camp CARPA and Carpaleaks, visit www.craftresearchagency.com and www.carpaleaks.org.

She received an MFA in Fiber and Material Studies from School of the Art Institute of Chicago and a BA in film and video production from Columbia College Chicago. She is also a mentor and instructor with the MFA Applied Craft and Design program (cosponsored by Oregon College of Art & Craft and Pacific Northwest College of Art) in her hometown of Portland, Oregon. You can find her on Facebook.