Collaboration and Continuation by Lisa Klakulak

Surface Design Journal’s Summer issue, “The Body Embellished“, features a new department showcasing artists-in-residence and their experiences they have while away. At the 2015 American Craft Council Show in Atlanta, GA, artist Lisa Klakulak was presented with an Award of Excellence that included a two week fellowship at the Hambidge Creative Residency Program near Dillard, GA. Below she talks about her investigations, explorations, and collaborations with a fellow artist.

Lisa Klakulak‘s studio in the Fisher House at Hambidge Residency

I had decided to focus on furthering my exploration of metal wire as a structure for extremely thin, yet full, felt during for the first two weeks of December 2015. I had been developing this idea in smaller scale works of earrings and bracelets and had larger collar forms in mind as well as needing time to experiment for a collaborative project I had recently committed to with metal artist, Sarah West, from Raleigh, NC. We had discussed my encasing her brazed steel forms in a taut felt skin to create a large scale wearable sculpture for Exhibition in Motion- a runway fashion show for the Society of North American Goldsmiths’ annual national conference to be held in Asheville, NC in May of 2015. I brought a collection of her forms with me to the residency, and once sprayed with an enamel to prevent rusting, I began my side of the investigation. 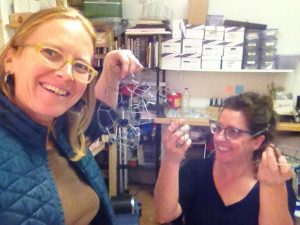 First, I wrapped a single frame of an incomplete wire form with wool fiber, and then laid fibers across the interior of the frame and proceeded with felting the wool. I wanted to be able to fit the form under the sewing machine foot to introduce free-motion embroidery on the felt panel. Sarah’s work often incorporates pieces of vinyl records prong set on her steel forms and she had an interesting black and white patterned heavy metal record to incorporate that I wanted to respond to with my stitching. If I didn’t intend to free-motion embroidery the felt panel, this approach would have produced low integrity felt, too vulnerable to pilling and puncture, as it didn’t have the ability to shrink due to being attached at the edges. 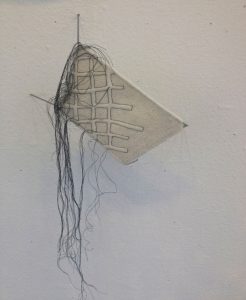 The other approach Sarah and I discussed was to entirely encase, not only, a single form, but many of them linked together. After calculating the surface area of her steel frames and increasing that area based on the shrinkage factor of the quality of thin felt I desired, I enlarged the form with plastic sheeting and wrapped the form with cross-hatched layers of the calculated amount of wool fibers. I began the felting process, slowly removing the plastic from a small hole to allow the shrinkage of the encasement. 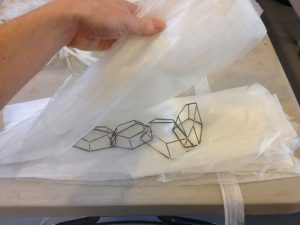 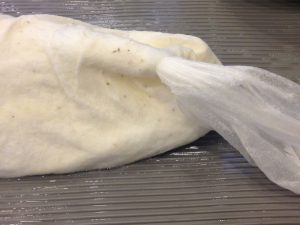 The shrinking of the felt skin compressed the chain of interlinked forms into an even smaller form as expected, but to my surprise the clinking noise of the metal forms rattling against one another was also suppressed, increasingly muffled into total silence. I then hand stitched the felt around the wire to delineate the angular armature below the surface. This process provided me a great metaphor to my residency: to slow down the movement and quite the noise so to be able to focus on the underlying substance in my studio practice. 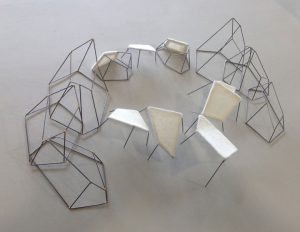 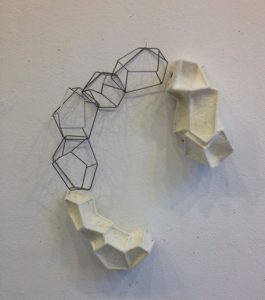 After the residency, I sent Sarah the pieces I had encased/stitched and we had a phone conversation to devise our collaborative piece. One of our sample structures fit the curvature of a shoulder and was reminiscent of the high shoulder pads popular in the 80’s that alluded to the defensive strength of a football uniform’s shoulder padding or the angular shaped shoulders of the Transformers, a robotic toy line, also from the 80’s. We decided to pursue a large neckpiece incorporating oversized shoulder pieces. Sarah created all the structural components, I felted and stitched them. 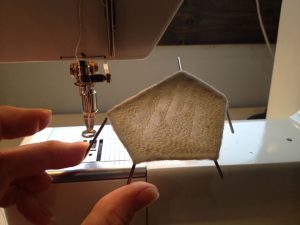 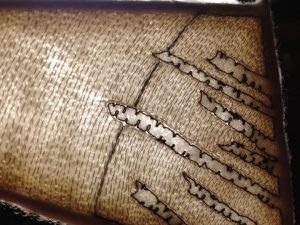 Sarah, then, had to finish brazing the metal forms that she had left incomplete so that I could manipulate them under my sewing machine. To protect the white felt from getting dirty as well as from burning in this process, she wrapped the felt panel in plastic first and then covered it with wet paper towels. 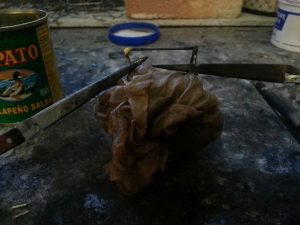 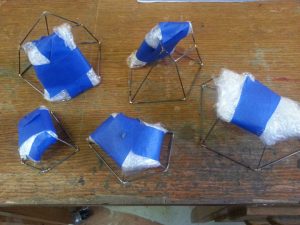 Sarah came to Asheville with all the components and we arranged them on a body form, marking which pieces would be connected together. She then returned to her studio to prong set the pieces of vinyl and to link all the components. 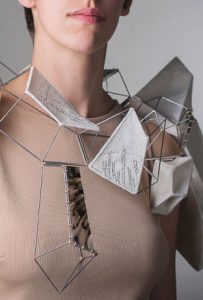 During my residency, I was able to stay focused on the direction chosen and to not only develop new approaches to my work with felt, but to have the stillness to think more clearly about my process, renewing my passion for felt. My intention was to continue working with metal as a substructure though I couldn’t have known what this residency and collaborative experience had prepared me for. I travelled to Santiago, Chile in March/April 2015 to teach workshops and travelled south afterward. Flying over the Patagonian Ice Field, I could see the snow capped areas of accumulation transitioning into the compacted glacial tongues of ice that descended in elevation, fracturing along the rugged terrain. I was awestruck by the angular forms at the snout of the glacier and couldn’t imagine a more appropriate process to express such a phenomenon in then that of felt’s compaction from individual fibers into a firm air-less mass and using a substructure of wire to articulate the angles. 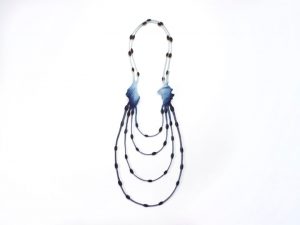 Lisa Klakulak is an SDA member and artist based out of Asheville, NC where she runs Strongfelt Studio.