Another shout out to an accomplished SDA member, an Arrowmont call-for-entry, textile podcast, and so much more this week for your Friday Fibers Roundup! 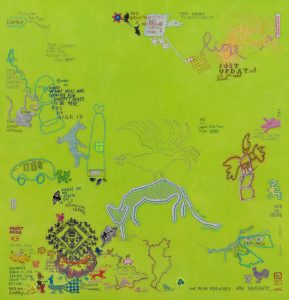 2) “Bethany Yellowtail Belongs to a New Generation of Native Designers Blending Tradition with Couture” looks at how indigenous designers have been fighting for recognition since the mid-1940s, and the debate over who can use tribal designs (via KCET).

4) Rei Kawakubo’s 18th Century Punk designs dig deep into times of revolution and change through a fashion photoshoot. Kawakubo talks to Susannah Frankel of AnOther Magazine about her series, Comme des Garçons, in this interview.

5) Arrowmont School of Arts and Crafts has a call for entries for their Biennial Sevier County Juried Exhibition to recognize and foster the skills and talents of the artists and craftspeople who live in that region (applications are due November 28th).

6) Thinking about creating some “site-specific” work? The article “Why ‘Site-Specific’ Isn’t so Specific” by Daniel Grant questions the intentions of artists who use that term to describe their installations and sculptures (via Hyperallergic).

7) These restored color photos of immigrants in their national dress by Augustus Francis Sherman show the variation of cultures that came through Ellis Island between 1892 and 1964 (via Buzzfeed).

8) The Craft School Experience just published a new episode their Make/Time Podcast and this one features Rowland Ricketts: Living With Your Work.

9) The knitting style of Hønsestrik, while on the surface is very adorable with its animal prints and bright colors, is actually about making a political statement against capitalist yarn producers who only allowed you to buy a pattern if you also bought the yarn the pattern was designed for (via Knitted Cakes). 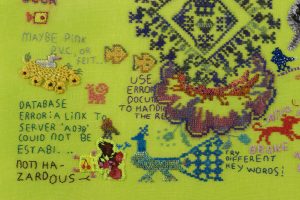