In honor of “Mending”, our Fall 2016 edition of Surface Design Journal, coming out this week, every roundup post expands upon and reference this hot topic. 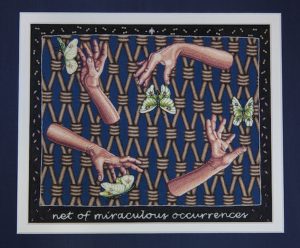 1) In “Extreme Mending”, Susan Brown questions why the concept of mending is rarely brought up in conversations about sustainability (via Cooper Hewitt).

2) Aram Han Sifuentes’ Test Sampler Sewing Workshop is coming up on Sunday, December 4th at the Jane Addams Hull-House Museum. If you’re in the Chicago area, go learn how to sew while also learning the US citizenship test materials. (Sifuentes’ exhibition, The Official Unofficial Voting Station, is featured in our “Mending” SDJ issue on page 62).

3) “The Pleasure and Meaning of Making” by Ellen Dissanayake is an abridgment from a talk in which she argues that the behavior of art making is a universal impulse in all human beings and all societies.

4) Nene Humphrey’s performance, Circling the Center, is a striking metaphor for grief where Victorian mourning braiding is blended with neuroscience (via Hyperallergic).

5) In Fixing Hearts, Aymara women weave devices to help the thousands of kids born with holes in their hearts (via AJ+).

6) French artist Estelle Chrétien created Ground Operation, in which she dug a small division into a lawn and then stitched it back together with electrical cable like thread into a wound (via Colossal).

8) An alternative to leather has surfaced, and it’s made from pineapple waste! Piñatex fabric is vegan, durable, sustainable, biodegradable, and uses the fibers from the pineapple that would otherwise be considered waste material (via MNN).

9) The Future of Fixing is an open source exhibition that promotes engagement with making and repair to integrate fixing into our day-to-day life. The show is on display until January 7th, 2017 at The Center for Craft, Creativity, & Design in Asheville, NC.