Rachel Wallis "Gone but not Forgotten"

This week’s Friday Fibers Roundup features many makers, artists, and creatives working in socially engaged and critical ways. Whether it’s a communal textile project shedding light on the rollback of women’s rights, or garment workers discussing health, safety, and labor concerns about fashion production in LA, this week’s roundup will not disappoint. 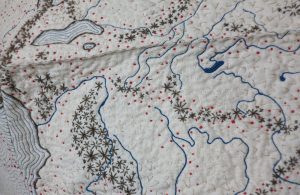 1) The Exquisite Uterus Project was started by Alison Gates and Helen Klebesadel to unite people to respond to legislation nationally that sought to incrementally roll back women’s reproductive rights. Socially Engaged Craft Collective recently did a write up on the project featuring some pieces from the traveling exhibition.

2) Cape Town-based artist Danielle Clough embroiders portraits of friends and loved ones by staring with black and white palettes, but substituting her own colors (via Colossal).

3) Bolivian women are reclaiming their history by wearing garments once used as discrimination –bowler hats and layered skirts–to empower women and see their Andean histories as a source of pride (via National Geographic).

4) Patricia Bishop, a farmer from the Annapolis Valley, is growing flax and transforming it into linen by creating new machines, built in Nova Scotia to sew into garments (via CBC).

5) The Garment Worker Center recently published an article titled “Dirty Threads, Dangerous Factories: Health and Safety in Los Angeles’ Fashion Industry“, and in it they discuss L.A.’s cut and sew apparel industry’s wage expenses, health and safety concerns, and the workers themselves.

6) Proust’s Muse, The Countess Greffulhe exhibition features the fashions from the legendary wardrobe of Élisabeth de Caraman-Chimay, the Countess Greffulhe (1860–1952). The show is on display at the Museum at the Fashion Institute of Technology in New York until January 7th, 2017.

7) The musical group Black Books’ music video for Favorite Places—off the Aquarena EP–features a mix of textiles in stop motion.

8) Suzy Vickery was interviewed by TextileArtist about her current Wellcome Trust funded project on art and health with women in the slums of Mumbai. Her work in the region is the inspiration for her embroidered textile pieces, which draw on issues of iconography, identity, and gender.

9) A 17th century map was found in a chimney in Scotland, but inadvertently destroyed in the shipping process to be observed. A team at The National Library of Scotland was able to find a way to restore the map a very impressive manner.

10) Artist Cat Rabbit sews adorably dressed animals from felt, creating characters like kindergarten-bound lambs and a star mathlete rabbit. Each design is completely made by hand, creating each work without a preconceived pattern (via Colossal).