This week’s Friday Fibers Roundup features articles on a forgotten weaver, an African American female artist group exhibit, a fifth-generation Master Printer in India, as well as how historic tapestry weaving was done. 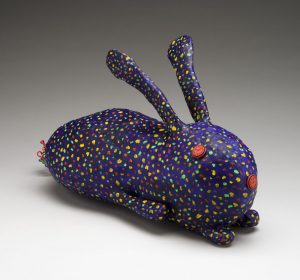 1) The Crossover Borås 2017 Conference of the European Textile Network, co-organized with the Swedish Museum of Textiles and Nordic Textile Art Association, is now open for registration. The conference aims to present a global perspective of the different textile practices with a focus on sustainable creativity and innovation in textile art and design, and take place at the Swedish Museum of Textiles, in Borås, Sweden from September 12-19, 2017.

3) “Weaving Together the Story of a Forgotten Pop Artist and Her Rugs” By Glenn Adamson looks at the overlooked artist, Dorothy Grebenak and her weavings, which were featured all over New York—not in galleries, but rather the gift shop (via Hyperallergic).

4) This video shows a mechanical loom made entirely from Legos and Kinects.

5) “Bagru Textiles: The Indelible Art of Block Printing” by Justin Lancy spotlights the work of Vijendra ‘Viju’ Chhipa, a fifth-generation dyer, Master Printer, and founder Bagru Textiles—a company which builds upon the legacy of his family’s cloth dyeing and printing business (via The Kindcraft).

6) “Kara Walker, Karon Davis and the Black Female Artists Retelling US History” by Matt Stromberg reviews Power, a new exhibition in Los Angeles at Sprüth Magers that groups together 37 African American female artists who tackle gender, equality and the legacy of slavery (via The Guardian).

7) “Making a Tapestry—How Did They Do That?” by Sarah Mallory explains why historic tapestries look almost embroidered and the amount of skill and labor that goes into the craft (via The MET).

8) These oversized, chunky stitched rugs and seat covers by Spanish designer Patricia Urquiola are able to be swapped out to change the appearance of your space as many times as you’d like (via de zeen).