This week’s Friday Fibers Roundup spotlights exhibitions that are both opening and about to close, as well as Stephanie Syjuco’s protest banner project, and an interview with the curator for Queer Threads. 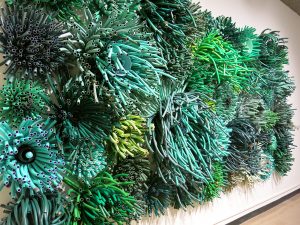 1) The Springfield Museum of Art presents the exhibition, Industrial Nature: Works by Michelle Stitzlein. The show features large scale sculptures made of a variety of recycled and found materials, and is on display until May 28th, 2017.

2) The New York-based writer, designer, and curator John Chaich was recently interviewed by Ickarus for Posture about his curatorial endeavor Queer Threads, which featured 26 artists from around the world focusing in fiber and identity, and is now also turned into a stunning book.

3) The 31st Biennial Exhibition of the Creative Crafts Council recently opened at The Mansion at Strathmore in North Bathesda, Maryland. The works selected exhibit the region’s top work in fiber, as well as other craft media. The show is on display until May 22nd, 2017, with a Curator’s Tour on Saturday, April 22nd.

4) “‘Reap What You Sew’ – Stephanie Syjuco’s Art of Protest” by Christian Sarkar explores the protest banner project started by Syjuco in the wake of the election. The projects invites participation–bringing citizens together, giving them a powerful voice, and strengthening the community (via Huffington Post).

5) Can you imagine wearing one garment for the rest of your life? This video from National Geographic spotlights the elaborately decorated, reversible dresses created by women in Sardinia (an island in the Mediterranean Sea), which they hand sewed as adolescents.

6) The exhibition Caryl Bryer Fallert-Gentry: 40 Years of Color, Light, and Motion features 46 quilts made by Caryl over the course of 40 years. The show is on display at the Texas Quilt Museum in La Grange, Texas until June 25th, 2017.

7) An installation by Marc Fornes features tubular branches that look like a crocheted coral reef, but once up close, are actually made from perforated aluminum (via Colossal).

8) The Graphic Arts Collection recently posted an article about a new set of Rugs, Blankets and Tapestries that were accessioned into the collection along with a new storage set up so they can be rolled, not folded.

9) Knit Pick’s Daniel K. explains the different knitting terms and weights for any beginning knitter out there.

10) Are you a fan of The Great British Sewing Bee? Upper Street Events and Love Productions are excited to announce that TGBSB will be launching a live event on September 21st-24th, 2017. The unique event is for anyone interested in sewing (whether it’s dressmaking, tailoring, fashion, from professionals to beginners), with tickets on sale now!