This week’s Friday Fiber Roundup features new fabric from NASA, a NYC bodega made completely from felt, and the dyeing history of the American flag. 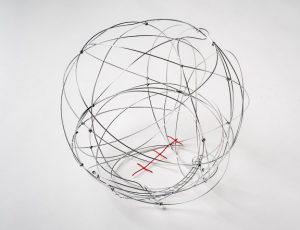 1) Lucy Sparrow’s 8 Till Late recreates a bodega with all fixings in her most recent New York City installation.

3) “How Quilting got Ripped Apart by American Politics” by Hannah Henderson looks at the seemingly chill art of quilting and its historical and contemporary ties to politics (via BBC).

4) NASA researchers have developed a metallic space fabric made of interlocking stainless steel squares. It looks like chainmail, but instead of being welded, this material is 3D printed (via Wired).

5) “Alternative Sari Drapes” by Shilpa Sharma explores the vast world of ways to drape a Sari, as well as how some families stick to certain techniques and styles (via NOTJUSTASHOPPER).

6) Montreal-based artist Martin Messier transformed a series of sewing machines into an orchestra.

7) “Why these colors don’t run: Dyeing the Star-Spangled Banner” by Dan Holm explains how the colors of the American flag came to be using natural dyes (via Smithsonian).

8) The San Jose Museum of Quilts & Textiles recently announced their next Maker Space Artist in Residence —Heather Deyling. Beginning July 7th, Deyling will be hosting Open Studios as well as continuing her work on the series, Invented Hybrids.

9) “Fig Leaves Are Out. What to Wear to Be Kind to the Planet?” by Tatiana Schlossberg looks at the environmental impact our clothes have on the environment (via New York Times).

10) These adorable embroidered pins by Turkish artist Irem Yazici depict mini plants, animals, and symbols, and are the best way to get some magic and vibrancy into your wardrobe (via Creators).