Our amazing conference just finished, and to top it off, this week’s Friday Fibers Roundup features articles on some of our Keynote speakers and demonstrators (plus some extras)! 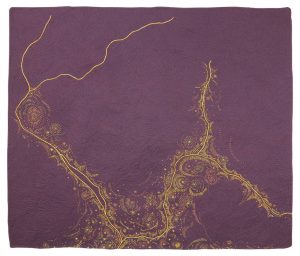 1) This video shows Aram Han Sifuentes’ Protest Banner Lending Library where Sifuentes leads workshops to teach others how to make their own protest banners in lieu of events that have unfolded since the November 2016 election (3Arts).

5) This article on WildCraft Studio School’s launch back in 2013 looks back on the humble beginnings of one of the Pacific Northwest’s favorite craft schools (vis Portland Mercury).

6) The Yarn Mission is a collective formed in response to the violence and police brutality in nearby Ferguson, Missouri. Their mission is to “use yarn to promote action and change to eradicate racism, sexism, and other systems of oppression” (via The Guardian).

7) “Copyright in Knitting and Crocheting” explores the legal grey areas of using and selling someone else’s pattern, and the similarities between the ancient art form (via Plagiarism Today).

8) Scientists have figured out a way to use the coloring of peacocks to create a non-polluting method to color textiles using 3-D colloidal crystals (via ACS).

9) “The Environmental Crisis in you Closet” by Adam Matthews examines “Knit City” (Tirupur, Tamil Nadu), and the deceivingly helpful boost the economy received after the clothing industry moved in (via Newsweek).