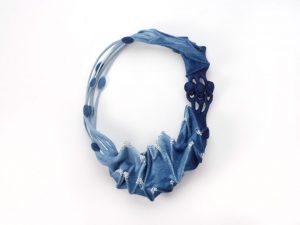 3) Body as Site is a residency offered by the Banff Centre for Arts and Creativity. It’s a thematic residency exploring the body as a site of investigation in contemporary art. The deadline to apply is Wednesday, September 21st 2016.

4) Nearly fifty years ago, Sheila Hicks created two tapestries for the Ford Foundation, and over that time, the work has undergone some wear and tear. This video shows Hicks re-creating and repairing the pieces.

5) The 2016 Paper Biennial Rijswijk features the work of contemporary artists using paper for large-scale installations. The show is up until September 18th at Museum Rijswijk in the Netherlands.

6) Caroline Dignes, costume dyer and painter, describes the Jacobean and rock ‘n’ roll imagery and process of the textile finishing for the costumes in Hamlet. The show will play in the Allen Elizabethan Theatre at the Oregon Shakespeare Festival from June 7 to October 14, 2016.

7) The Secret Life of Textiles: Animal Fibers just opened at The MET in NYC and runs through February 2017.

8) Rare footage detailing the production of Japan’s Nishijin Textiles, available from the Mingei International Museum Video archive, in conjunction with the Mingei of Japan exhibition, on display through October 2016.

9) The Brooklyn Museum just announced A Year of Yes: Reimagining Feminism, which features ten distinct exhibitions and an extensive calendar of related public programs celebrating the 10th anniversary of the Elizabeth A. Sackler Center for Feminist Art. The Museum-wide series starts in October 2016 and continues through early 2018.

10) These stunning paintings of vintage of thread by Sydney Bella Sparrow look like photographs (via The Jealous Curator).