This edition of Friday Fibers Roundup features articles about crochet, color, and where those two overlap for some really amazing projects! 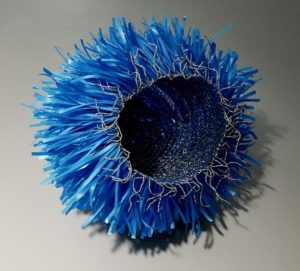 1) Artist Laurel Roth Hope creates colorful, one-of-a-kind crocheted bird suits designed to fit a standard urban pigeon, complete with a hood retrofitted with eye and beak holes. While the project isn’t without a bit of humor, its warning is particularly dire: each suit represents an extinct bird species and highlights the futility of restoring lost biodiversity (via Colossal).

2) “The History of the Color Orange: From Tomb Paintings to Modern-Day Jumpsuits” by Jessica Stewart asks “What is it about the color orange that makes it so effective?” In some cultures, it’s considered a sacred hue, while in others it’s a symbol of royalty (via My Modern Met).

3) “Mexico City’s Major Fair Exposes the Art World’s Renewed Love of Craft” by Michael Anthony Farley examines the growing evidence of a renewed worldwide interest in traditional craft, from natural dyes and textile techniques to ceramics and processes that speak to labor (via Observer).

4) “La Crosse Boy a Globally Renowned Crochet Prodigy at Age 11” by Emily Pyrek looks at how Jonah is sent yarn by the thousands from fans who follow the young crochet prodigy on social media and drape their couches with his one-of-a-kind blankets (via La Crosse Tribune).

5) “A Surreal Series of Crocheted Masks Representing How People Portray Themselves Online” by Lori Dorn features the eerie but highly symbolic series of surreal crocheted masks, some of which have a great deal of movement to them by Irish performance artist Threadstories (via Colossal).

8) “Dyed in the Wool” by Tim Murphy looks at how Jennifer Knight revived an American manufacturing brand, returned jobs to a small American town—and in the process, come back to the fabric business she grew up in (via Brown Alumni Magazine).

9) This video shows how DyeCoo Textile Systems invented a way of dyeing clothes without using water or chemicals.

10) Caitlin McCormack integrates cotton string, vintage fabric, beaded objects, and other found materials into small crocheted skeletons, presented as preserved objects like one might find in a curio cabinet (via Colossal).