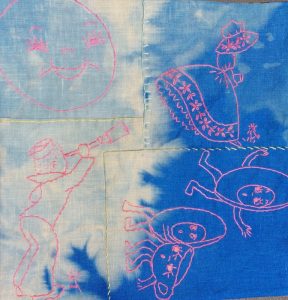 1) The exhibition Sheila Pepe: Hot Mess Formalism recently opened at the Phoenix Art Museum (Arizona) and features more than 70 works, including the premiere of a three-story, site-specific work created exclusively for PAM. The show is on display until January 28, 2018.

2) This article by Stephanie Buck looks at the resurgence of macramé by younger artists (via Timeline).

3) Warren Wilson College (Asheville, North Carolina) is pleased to announce The Master of Arts in Critical and Historical Craft Studies, which is now open for applications with a deadline of March 1st, 2018.

4) Studio Views: Craft in the Expanded Field is a two-part exhibition by artists LJ Roberts and Sarah Zapata. The first being an extensive tribute to nomadic lesbian van culture, and the second features textiles inspired by pre-Columbian artifacts found at the sacred Nazca site of Cuahachi, in present-day Peru (via The New Yorker).

5) This article selects seven artists from the exhibition and book Queer Threads: Crafting Identity and Community (curated by John Chaich and Todd Oldham) to spotlight the amazing work they’re doing (via Out).

6) The exhibition Subverting Crafts: Ruth Asawa recently closed, but this spotlight give you a look at the stunning net sculptures hung from the ceiling that were on display at David Zwirner Gallery, New York.

7) The Winter 2017 Xochi Quetzal Residents were recently announced and the six talented artists will now have year long residencies in Chapala, Jalisco, Mexico.

8) This newly released Oral History of the Bauhaus (with Walter Gropius, Ludwig Mies van der Rohe, and more) spotlights the aesthetics and influences the Bauhaus had on the art, craft, and design world (via Open Culture).

9) Frieze London claims itself to be the defining voice on the cutting edge of contemporary art, and this article features 10 Artists to Watch from the 2017 fair–some of which are textile artists! (via Artsy).

10) “Aaron McIntosh’s Invasive Queer Kudzu” by Monica Moses explores McIntosh’s work representing the experiences of LGBTQ people in the South and the works make up the raw material of his upcoming show (via American Craft Council).